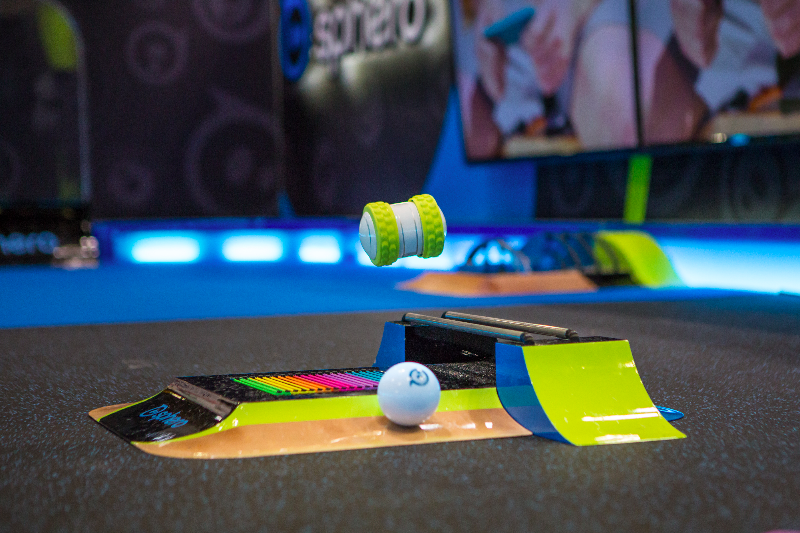 At around 3 p.m., I bring Ollie home and open it up, then get back to work. My cat, Athena, sticks her head in the box for a little bit, then goes back to a perch and begins licking her arms for pretty much the remainder of the afternoon.

Ollie spends the afternoon plugged into my computer, charging, and after a few hours we’re both ready. I set it on the ground and pair it with my phone. The tiny cylinder wakes with a start, flashing blue and purple and red. Athena hops off some high perch and alights nearby, sniffing Ollie with polite curiosity. My other cat, Batman, lays low on his belly, staring at the extraterrestrial interloper from the next room. Batman has anxiety issues.

I decide to wait until everyone’s home before activating Ollie, as I don’t want to be the only person to witness how these animals react to a state of the art remote-controlled robot. The last time I threw a party, for example, Athena stood luxuriating in the crowd’s attention, exposing her belly to them as if it was some sort of parlour trick. Batman hid behind a houseplant for the entire weekend. These two were about to meet a glowing disco cyborg that could move at 15 mph and do tricks off a ramp, and I at least wanted pictures of the experience.

Batman lays low on his belly staring at the extraterrestrial interloper from the next room.

And so at 10:20, with everyone home, I put my phone next to Ollie to activate it. I press up on my phone’s d-pad, and Ollie complies. I hold up on the d-pad, and Ollie buzzes at a polite hum into a wall. But what happens next bucks expectation: I push left, hoping to turn the little robot around with the usual tank-style controls, but it instead just flies to the left into a garbage can. When I hold down it buzzes back to me, stopping with a gentle skid at my feet.

Ollie’s creators at Orbotix got their start in robotics, which explains the machine’s pitch-perfect sense of lightness and weight as it careens through my apartment. But, according to co-founder Adam Wilson, it was the rise of smartphones that really made their creations possible, greatly reducing the cost of accelerometers and production and putting a smart, bluetooth-equipped device in most households.

What’s interesting is that the smartphone didn’t just facilitate the toy’s production but also prolong its lifecycle. Orbotix’s first toy, the slightly smaller, gentler Sphero, comes with an app that lets you play with its color, pilot it around, and do tricks, as well as engage with a longer story mode that gradually unlocks new powers. But searching the App Store, you’ll see a bunch of programs made using Sphero’s open-source programming: one that lets you draw with the device, games of hot potato, an obligatory version of Flappy Bird, and so on. Sphero was initially dismissed as a fancy cat toy (it, and Ollie, are more than that, even if they’re also that), but by appealing to developer creativity Orbotix turned the device from a gadget into a platform. Wilson says his favorite app is one of Orbotix’s in-house games, called Sharky, which, when viewed through the smartphone’s screen, replaces the Sphero with a gigantic cartoon woodchuck. Watching that thing run into your bookcase is equal parts unsettling and awesome.

Sphero initially came out in late 2011, around the same time the first Skylanders game did. Both traverse an interesting wormhole between digital and physical play; they work, I think, because they manage to be both technologically amazing and also surprisingly traditional in their delights. Both are unequivocal—”here is a toy”—even as they gobble up an adult’s afternoon. After a childhood watching remote-controlled cars get loaded with D batteries, fall off the patio once, and die forever, it’s amazing to just see Sphero work, let alone be reinvented repeatedly via community innovation.

Ollie, then, is a refinement of this experience, or an italicization of it. It’s three times faster than Sphero, and more durable; it’s made, in part, to cause trouble. If Sphero was a bookish six-year-old, then Ollie is her hellraising older sister. Athena wants nothing to do with it. In the 30 minutes since I introduced the cyborg to the family I have seen her leap apropos of nothing four feet in the air; I have seen her scoot backwards on her belly faster than she normally runs toward food; I have seen her, amazingly, cower. Over time, I know, she will come to feel dominion over Ollie, as she does all else that falls under her gaze.

But for now, it’s Batman who chases Ollie off ramps and under couches, who bravely bats at it as it does mid-air 360s and skids along on one wheel. I drift it around a corner, and he skids behind it in hot pursuit. You may not be able to teach an old dog new tricks, but Ollie proves that old toys—and cats—learn new ones all the time.