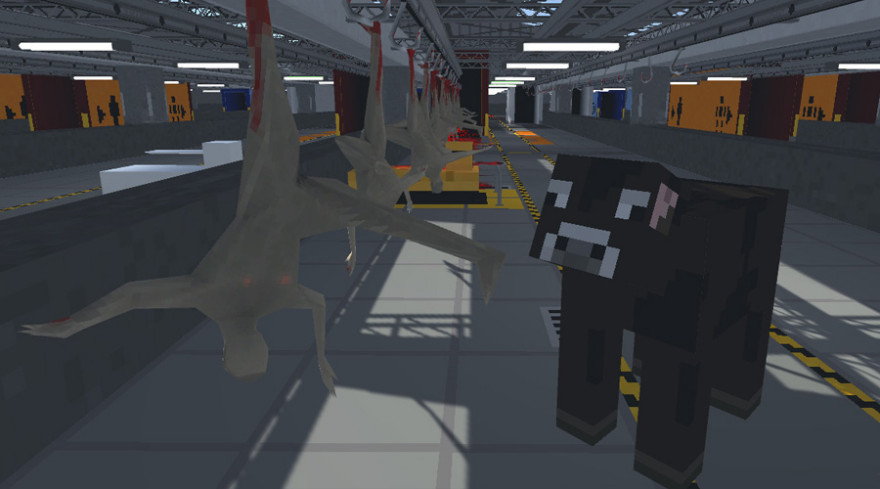 In the interest of full disclosure, let me start by confessing to my carnivorous ways. I enjoy eating meat, and lots of it please and thank you. Braised, roasted, grilled, cured, tartare, barbequed, sous-vide—you name it, I’ll eat. I cannot present you with a compelling ethical argument in defense of this diet. Sure, I can make an impassioned speech about treating animals humanely whilst they live, but I’m in favour of killing them for my gustatory pleasure so such a statement would probably carry little weight. All I can really say is that if the cleaver were in the other hoof, I’d fully expect the animals to eat me for dinner. What I lack in moral fiber I make up for in logical consistency.

If the cleaver were in the other hoof, I’d fully expect the animals to eat me for dinner

That Cow Game, an entry in the latest Ludum Dare game jam, takes this worldview to a logical conclusion. It imagines a meatpacking plan in which human carcasses are suspended on meat hooks and cows supervise their butchery. At the start of the assembly line, the humans are whole, albeit hanging upside down. Shortly thereafter, blood is streaming from their corpses and pooling on the ground beneath them. Before you can say, “I’m not sure how I feel about this,” their bodies have been butchered into parts and are headed down a conveyor belt.  At this point you might want to stop everything and declare that, having given the issue a bit more consideration, vegetarianism is indeed the way to go. But it’s too late. Those arms, legs, and ribs are now in sealed packages and being dumped into the back of a refrigerated truck.

There’s very little for you to actually do in That Cow Game. You walk around and take in this new world. That’s it. This is not a game that is interested in granting you more agency than is absolutely necessary. Any resemblance to a horror flick in That Cow Game is largely incidental: the experience exists to replicate commercial practices as opposed to the formal conventions of genre cinema. If those two things look the same to you…well, maybe it’s time to rethink your dietary habits.

That Cow Game did not convince me to give up meat. I’m a stubborn glutton. Nevertheless, I mainain That Cow Game serves a useful function. In all forms of consumption, it’s worth reckoning with the ways in which products we enjoy are made and the moral choices that they embody. Ideally, this would lead to more ethical behavior, but a bit more self-awareness is a decent start. That Cow Game tests the limits of what carnivores find palatable, and forces them to live with their decisions. That’s hardly a revolutionary accomplishment, but it’s a decent start.

You can download That Cow Game on developer Nomand’s Itch page.