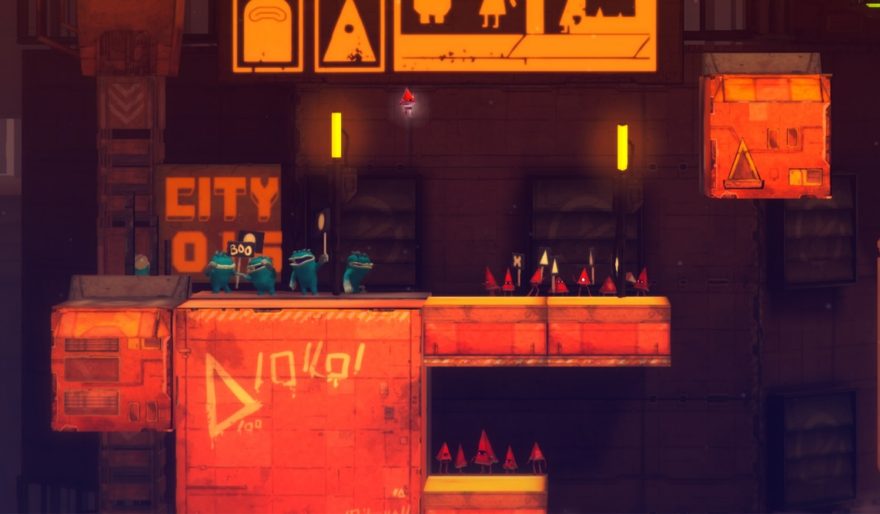 While On Rusty Trails may look like yet another 2D platformer at first, its creators at Black Pants Studio took it beyond that simplistic impression by enabling a discussion about race through the game’s primary mechanic.

“It was one of those days where I read the newspaper and there was an article about guys beating up people for having the wrong skin color,” said Tobias Bilgeri, the game’s designer. “I read another article where a German politician said: we do our best, but the people who come to us have to integrate themselves. Then I thought, even if they eat bratwurst, drink German beer and sing German songs, there will always be people who won’t agree that they are part of us, just because of their appearance.”

“It shows the absurdity of racism”

This is when Bilgeri came up with the idea that motivated the creation of On Rusty Trails: “what would it be like if everybody had a suit, which could change their appearance within the blink of an eye. Would that be a solution?”

This somewhat crude approach to the topic delivered the “Switchy Suit.” It’s a suit that lets the main character of On Rusty Trails change his color between the rust-red that lets him live comfortably at home, and the ocean-blue that lets him fit in among the sea-dwellers that make up the other half of the world’s population. Changing colors is essential to progress in different areas, and you’ll be able to avoid environmental hazards and walk on different platforms depending on which color you currently are.


It’s a simplistic approach but it’s intended to be. The simplicity with which you can adapt to a situation, simply by using the Switchy Suit to change to the right color, is designed to highlight how ridiculous prejudice really is. “Some things are easier if you have the ‘right’ gender, skin color, religion etc. in the right situation, while other things become impossible,” said Bilgeri. “In the game you can feel this every time you use your suit. Some things will work, some people will be nice to you, but others who were your friends just a second ago, will instantly start to bully or even attack you. It shows the absurdity of racism.”

Can a tiny platforming triangle teach players about the petty systems that inform racism? Maybe, maybe not: the key thing for Bilgeri is that talking about inequality in more places increases the chance people will take notice, and that can’t be a bad thing.

On Rusty Trails released in June for PC on Steam, GOG, and itch.io. It’s being exhibited as part of the innovation showcase at GDC Europe 2016.