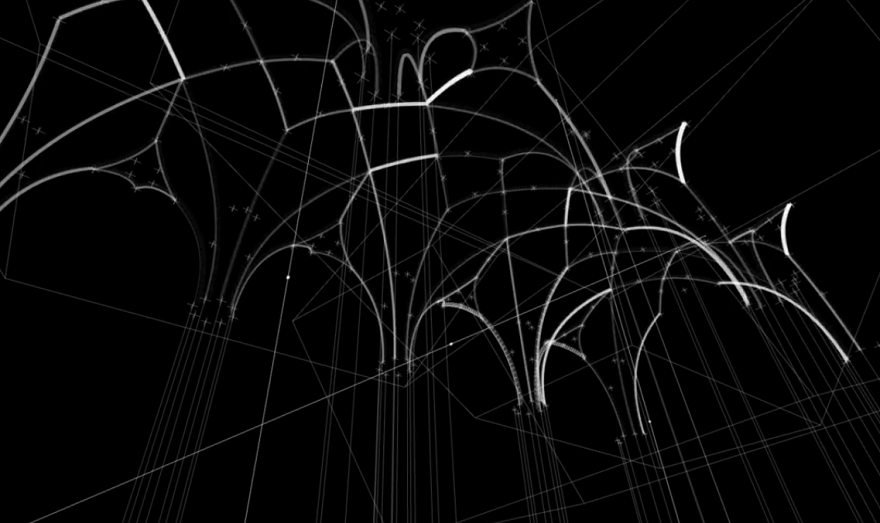 Sometime in the 1820s, Nicéphore Niépce created “View from the Window at Le Gras,” an image from his countryside estate that would later become the world’s oldest surviving photograph. Nearly two centuries later, people snap, discard, and forget about pictures more precise and vibrant than anything Niépce could have imagined. Now, it’s no longer enough to perfectly represent the things we see. Instead, the challenge is to take the world as we see it and re-populate it with own images.

One project, IOIN, is Ján Šicko’s attempt to do just that. Coming out of DevKid, his creative laboratory, IOIN is a tool the Šicko designed to help him map performance spaces in real time. “I use it to rewrite the physical form of the space into digital substance,” he writes. Rather than create realistic representations, Šicko says he’s interested in pulling out the “essence” of a space.

The program does this by plotting a number of points based on the structures being played with. He then connects them with a number of different strokes, each having its own resolution, rotation, and scale. “The stroke is more like a spine,” Šicko explains. Different templates can be attached to these spines, which end up defining the final 3D mesh. Once he’s captured what he wants from the space, Šicko can then impose his digital renderings overtop of them.

“For me it is important to vanish physical substance of one and give physical reference to the second,” he writes. In one project, IOIN was used to map each of the thirty rays extending from a circle in the center of the stage. Lighting effects and text could then be projected onto them, acting like a physical canvas for digital art, a photograph in reverse.

They help me touch the limits of my abilities

Two of Šicko’s other projects were even more complex. Working with organist Fero Király for performances exploring the work of Philip Glass, he took existing architecture and helped transform it through the combined music and light show. For Contrary Motion, Šicko mapped the massive organ at the Slovak Radio Building, consisting of nearly 200 pipes at approximately seven meters each. For Burlas Glass, the designer was tasked with producing a light show for St. Martin’s Cathedral. “I like projects where I don’t know how they’re going to turn out,” Šicko said. “They help me touch the limits of my abilities. The lighting design for the Burlas­ Glass concert is one such project.”

The beauty of IOIN is how it allowed him to manipulate the light show in the moment. “My goal was to produce an application which would create an image in real time based on the music and my interpretation of it during the concert,” explained Šicko. “The emerging image was projected onto the cross vaulting of St. Martin’s Cathedral, heightening or negating its topography.” In this way, he was able to augment the look and feel of the room in concert with the music echoing through it.