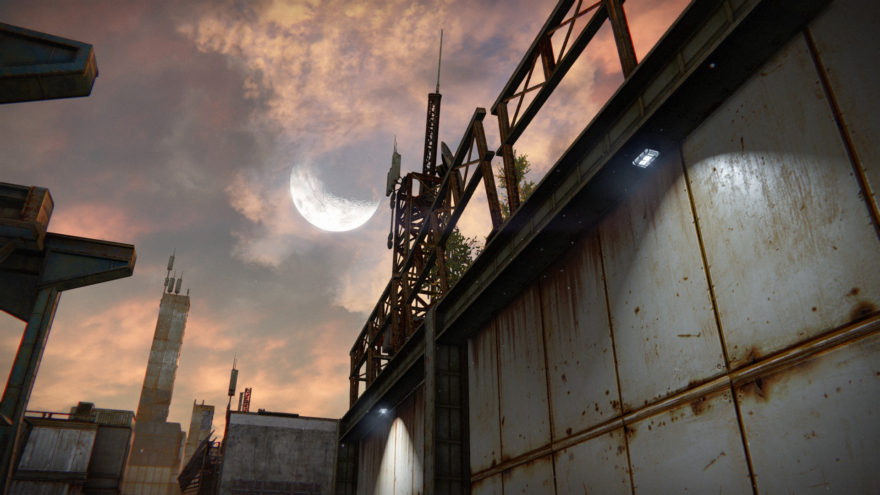 There’s a set of stairs in my childhood house that I still climb like I was eight years old. It’s not something I do on purpose; it’s something ingrained, so that the moment I step on the first step my hands come instinctively down and I scramble up the carpeted ledges like a dog. It’s as if, through repetition, the space has ceased to be something true, objective, and has transformed into a series of emotional and psychological triggers, arranged in the precise configuration to cue my physical response.

There’s a room in Destiny‘s (2014) Cosmodrome that feels exactly like that staircase. Any long-time player will probably know what I am talking about. It’s a small room, just through a broken wall on the right of the starting area, with a little crater in the center. It lies between the Steppes, where you beam in every time you start a patrol, and dock 13, where you fight your first boss and recover your ship. The thing about this room is that there are two ways through it. The first is to skirt around the crater, heading through a door to the left, and then cutting back across to the exit. Then there’s the shortcut, which due to the bars across the low ceiling, involves a precisely timed jump that should get you over the crater, miss the lip of the opposite side and head straight through.

A script of color, light, and space

I think in my first 30 or so hours of Destiny I got that jump right 50 percent of the time. But now, hundreds of hours later, I glide effortlessly through, unthinkingly, the button presses triggered on their own, my mind cued by the arrangement of volume and light. In fact, now, when I look at it, that room is part of a longer sequence, one that takes you through the gap in the stone wall with one jump, through a corroded iron shelter, down a corridor marked with a glaring floodlight, into the room, (hopefully) across the crater, and then straight to the set of stairs that lead down to the dock, underlit in such a way as to mark the walls with dark black bars.

In countless of hours of Destiny, this sequence and the many other like it, have remained unchanged. A script of color, light, and space. I’d imagine if it was wiped from existence the collective player base of Destiny could reconstruct it from their collective imagination, down to the finest detail.

Or could they? Because as I wandered through this space, taking screenshots, sizing up angles and arrangements, framing shapes, I realized that I had stopped seeing these rooms a long time ago.

Destiny is changing. With the newest expansion Rise of Iron comes some of the most significant changes to its world. Not in terms of systems and structures, but in terms of space and architecture. Previous Destiny expansions have added areas to its world, often bolting them onto forgotten corners and previous dead ends. But they have also made an almost absurd amount of reuse of existing areas, so that some sections of its world have three separate missions set in them, forward, reverse, and forward again, but with perhaps a slight detour. It’s become something of a running joke, and has contributed to the Pavlovian nature of sequences like the one above. In contrast, rather than simply reusing spaces, Rise of Iron is making changes to an existing area, the snowbound Russian Cosmodrome.

In advance of these changes, I thought I would take one last tour of the Cosmodrome, as it is and has been for the past two years. I wanted to catalog the sequences of spaces and architecture that have been ingrained into the collective mind of hundreds of thousands of players. The enemy placements, the lighting, the color schemes.

It was a process that was far more difficult that I imagined. The process of erasure through repetition had almost entirely numbed me to this rusted world. Like the sequence above, I no longer saw a world, or even a fiction, instead I just felt the triggers, the rhythms, the well-worn paths marked in the ground like the grooves of slow glacial erosion. I found myself first turning to the games’ skies, their unfixed patterns of weather and light impossible to entirely predict, always somehow new.

Through this process I was able to work my way down, from the skies to the architecture below. While once these might have been seen as rich vistas, a world to explore, I was now only able to see them as waypoints, markers through which I might orient myself. I was surprised by how familiar I was with them, how in each of the images above I was no able to close the frame, to stop myself pinpointing the precise location of the shot and the surrounding area. There was no way I could trick myself into seeing them any other way.

Game worlds are often very good at tricking us

And yet, as I worked my way from exteriors to interiors, worming my way into the tunnels that interconnect the Cosmodromes’ open spaces, I started to understand why. Game worlds are often very good at tricking us. They hide their constructedness beneath layers of artistry and detail, concealing the seams that join up their spaces. And yet they always maintain a certain legibility, a set of unspoken level design rules that we read without thinking, follow without asking. With my extensive playtime of Destiny, I had, in effect, eroded the patina of artistry that covered its world, and now trying to look again, to see it for what it was, I saw directly to those rules, those systems that lay beneath.

The reason I saw its architecture as waypoints is because that’s exactly what they’re designed to be. This extended to the game’s interiors, and I began to notice the rhythm of lighting that marked each exit and entrance. I noticed the patterns of alternating warm and cool lighting that gave depth to a scene, and made it clear which door you had entered from and which door you had left. I paid attention to the pipes, to the shadows and subtle shapes, to the litany of subtleties crafted precisely to orient me and others in this world.

Once this craft became so self-evident, Destiny took on a new light. The Cosmodrome remained unchanged, but how I saw it transformed totally. I began to look not for the flanking routes and vantage points typical to first-person combat, but for the mode by which those routes and points were placed, hidden, and indicated. I wanted to explode Destiny‘s grammatical structure, the language by which it was assembled, built and dressed.

I started to pay more attention to placement of enemies, the positions other players took. To the details that might point the way ahead.

And as I did I realized that this landscape was designed to be an unchanging system, a mass of interlocking volumes that, as if magnetized, would guide any player through the optimum path. The Cosmodrome itself took on the aspect of a museum, filled with memories of past events, but deadened, dusty, dry. Perhaps like my childhood home, the one where that staircase still triggers the child in me, it became a place in which too much has happened, too many memories intersect. As I ran down its corridors I remembered flashes of repeated missions and strikes, my route intersecting with their paths and then drawing away onto the paths of other pasts and memories. Every space began to feel over directed by design and over saturated with experience, the architecture a prism that refracted the current moment into many half-images of the past.

And as beautiful as that image is, and the depth and detail of the craft that causes it, a little change I thought, might do these spaces some good.