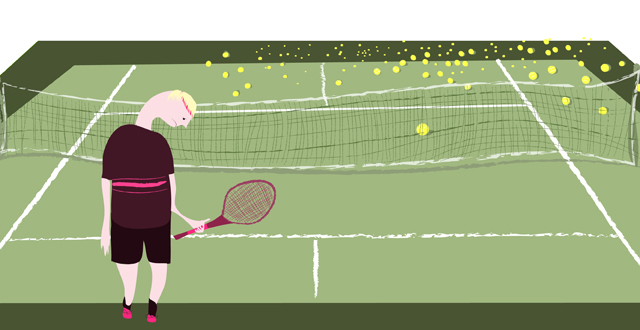 As the sole member of the Radiangames studio, Luke Schneider has been making some of gaming’s best shoot ’emups for the past two years. But despite the high quality of titles like Ballistic for Xbox Live Indie Games and Super Crossfire for iOS, his venture into self-employment has not been a rousing success. At times, Schneider feels that dealing with financial concerns and the burden of working alone is more than he bargained for. Our conversation revealed his day-to-day struggles in chasing the indie dream.

You were working at Volition before you quit to make your own games. Was it hard to adjust to the change?

Just the loneliness aspect more than anything. I’ve always had a good work ethic. I’m self-motivated, so that hasn’t been much of an issue. It’s more like, over a long period of time, I notice that I’m not talking to a lot of people—even on the internet. When I go on the internet, it’s mostly to talk, but it’s also distracting, so I don’t do it much. I have a family, so that’s nice, but in terms of having friends that I talk to on a regular basis, there’s not a lot of them right now. I’m still friends with a lot of people from Volition, but I don’t reach out and contact them very much.

Does anyone help you with your games?

I don’t have anyone. I talk to my wife sometimes about a game’s art style and other general “what should I do next” questions. That’s my situation right now. I don’t have money to pay anyone to come work with me. I’d like to work with an artist, or have someone who deals with the publisher and marketing. I just like working on the games. One nice thing about working on Super Crossfire for iOS was I could talk to my producer and ask him about certain design questions. It was nice to have someone to talk to.

It seems odd that you would leave a major studio to go to work on the Xbox Live Indie Games platform. Why did you start there?

I wanted to make console games, and I didn’t want to deal with publishers. I’m really fast at making stuff, so I thought I would make a bunch of little games and eventually one of them would take off—that people would start associating Xbox Live Indies with quality games. But that never really happened. Fireball didn’t sell that well. Inferno and JoyJoy sold a little better.

Were you worried about the risk?

I’m always worried, but I always believe that the next thing is going to be big. When I was working on Super Crossfire, I’d say, “This is going to do really well!” It’s done OK, but not very well.

What did your wife think about you going independent?

She knew it was coming. She knew I wanted to do it for a long time. It would have come a little earlier, but the stock market crashed and all my options at THQ became worthless. I was going to sell all my stock when I left, but that turned into zero dollars. I decided to save more money the old-fashioned way. We’ve cut back on everything for so long now that we are used to it.

How did you cut back?

We don’t buy as much stuff. We have a CRT TV that we’ve had since we got married. We got it as a wedding present over 10 years ago. The volume button doesn’t work. But it’s really heavy, and my daughters can bang on it. So that’s nice. I haven’t had to upgrade to all high-definition stuff. I really want to get a PlayStation 3, but there’s no reason to get one yet because I don’t need a Blu-ray player. Hopefully next year.

Did you cut back on food?

We hardly eat out anymore. We used to go out to restaurants all the time: Chili’s, Applebees, whatever. Olive Garden is pretty expensive. Now my wife cooks. She makes really good taco pizza. Really good enchiladas. Spaghetti every week. Once in a while, we have tilapia or salmon. All the homemade stuff is a lot cheaper than eating out. Another major thing is that we used to buy a new car every three or four years, and now we have the same cars that we’ve had for 5 years. [I drive] a Honda Fit. It’s a compact hatchback. Very cheap.

How far is your commute?

It’s four or five minutes. I would work at home, but I have daughters. It’s really nice to have that separation. My productivity is really high when I’m at work and able to focus. It’s worth the cost to have an office.

What is your work schedule?

Do you take breaks?

Nah, I don’t take breaks. I just work as fast as I can for as long as I can.

Do you ever get tired of making games?

Thinking about the overall designs of the games is always a challenge. I spend more time thinking about stuff when I’m at home now than when I was at Volition, because I actually care more about it. I get tired of being responsible for everything sometimes. I just want to ask someone a question or ask their opinion. I do get tired, but it’s part of what I signed up for. I just have to keep going. I can’t stop.

What makes working independently worth it?

[Long exhale] Well, just making so many cool games. Uh, I don’t know if it’s worth it. That’s a question I ask myself when I’m being contemplative. Why don’t I go work for an iPhone developer who is actually successful? It’s possible that I could run out of money and have to move and get a job at another developer. But I’m hoping that the start of the year will be awesome, and then I won’t have to worry anymore.

How have things been going financially?

[Laughs] They haven’t been going well!

Where do you think you will be five years from now?

[Sighs] I have no idea. I don’t even know what I will be doing after I port this other game to iPhone. I will probably still be making small games by myself, or at least with a couple of people. [Laughs] I’d rather not do it by myself forever. I’d like to have a couple of people to work with—if only for the company.