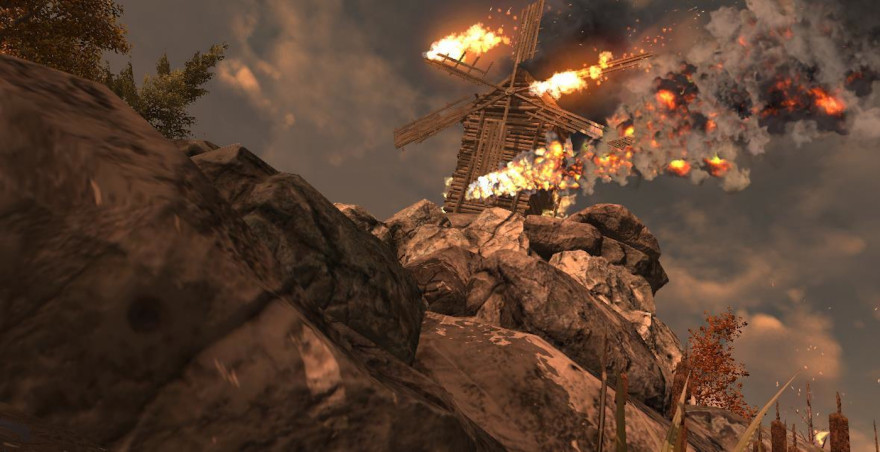 Partway through Only If, the player is asked to guide Anthony, the game’s protagonist, up a long, narrow, spiralling set of stairs. Moving the mouse a little bit too much in any direction will cause him to fall back to the ground and have to start the journey again. The reward for reaching the top of this obstacle is a set of tiny platforms that must be jumped across from the unwieldy vantage of a first-person perspective. If the player is patient enough to work through this frustrating sequence—falling and climbing, climbing and jumping—she is presented with a maze constructed of disorienting, identical walls. Once this navigation puzzle is solved and this particular series of Sisyphean tasks has been completed, the payoff is the sound of a barely coherent man screaming nonsensical plot exposition into a microphone.

While The Stanley Parable—Galactic Cafe’s 2013 meditation on the role of player choice in videogames—felt like it was delivering its message with a wry smile, Creability’s Only If offers a middle finger and a sneer. It, too, is an experience built on defying expectations: on asking its audience to consider the tendency toward blind obedience in rule-guided systems. But, Only If is so thoroughly unpleasant in how it explores this theme that one of the most reasonable responses to its argument is not engaging with it at all.

After a quick introduction that sees the player assuming the role of Anthony, a young man waking up in a strange room with a vicious hangover the morning after a house party, Only If starts getting angry—and aggressively weird. Anthony heads through a doorway and falls into a black void. He chases a ball of electric blue light through the darkness, eventually crashing into a wardrobe and landing in a plush, well-appointed parlour. A small radio sits on a leather couch. It crackles to life with the voice of Vinny, a Europeanized take on the New Jersey wiseguy who serves as the game’s constant antagonist. He guides Anthony through a series of convoluted tests, each taking the form of exploration-based puzzles. As the player listens to their avatar and Vinny banter back and forth, Only If uses every trick in the postmodern toolbox, from subversive commentary on the prevalence of guns in games to fourth-wall breaking audience call-outs, to ask big questions about the nature of free will and individual responsibility. These are typically far too blunt to be effective. In one instance, Vinny provides Anthony with a revolver and targets to shoot since “playing the thug life” [sic] is how “all young men . . . take responsibility.” In another, the player is directly asked whether or not they sympathize with the main character while he defends himself against a flurry of damning accusations.

The biggest obstacle standing between Only If’s philosophical intent and ultimate execution is its writing. Aside from a small amount of text (delivered by way of hand-written letters and single sentences splashed across a black screen), the game communicates with players through consistently bewildering dialogue exchanges between Anthony and his tormentor Vinny. Although aiming for poignancy, the script is filled with nonsensical bits of wisdom (“Life is the pan of quality and quantity”) and crude insults that frequently trade in homophobic and sexist slurs. If offense and an almost complete lack of clarity weren’t enough, Only If’s message is further obscured by an oppressively hostile tone. Aside from the unpleasantness that comes from Vinny and Anthony’s voice actors’ tendency to scream into their microphones, the player is made even more unwelcome in the game’s world due to the prevalence of unforgiving design choices.

The difficulty of Only If’s puzzles is less an issue, in this sense, than the glitch-ridden movement controls and widely spaced checkpoint systems. Replaying tough sequences that demand perfect play—there are a number of timing-based obstacles which allow zero room for error—becomes an exercise in superhuman patience. At times it seems like Only If might actively hate its audience, that it resents being played at all.

There can be value in hostile art—would punk music be as vital without the sneers and shouts?—but Only If’s coupling of aggression and poor technical execution makes reflecting on the reasons behind its authorial frustration far too difficult. Rather than shock players by portraying the ugliness of evil characters or spark outrage by illustrating the dangers of apathetic thinking, Only If inspires only a confused kind of revulsion. Games like Spec Ops: The Line may have used horrifying interactive violence to force a contemplation of the entertainment value of militarily-themed shooters, but its purpose was clear and its message effectively communicated. Here, there is little to gain from the experience but immersion into a misanthropic worldview. There is no lesson to learn; no discernable statement being made. In its greatest moments of clarity, such as the game’s Old Boy-inspired “White Pawn” ending (which comes off like a satiric take on eleventh  hour plot twists), it plays like a cynical jab at anyone who has ever looked for deeper meaning in confusing art. The rest of the time Only If is simply mean-spirited noise.