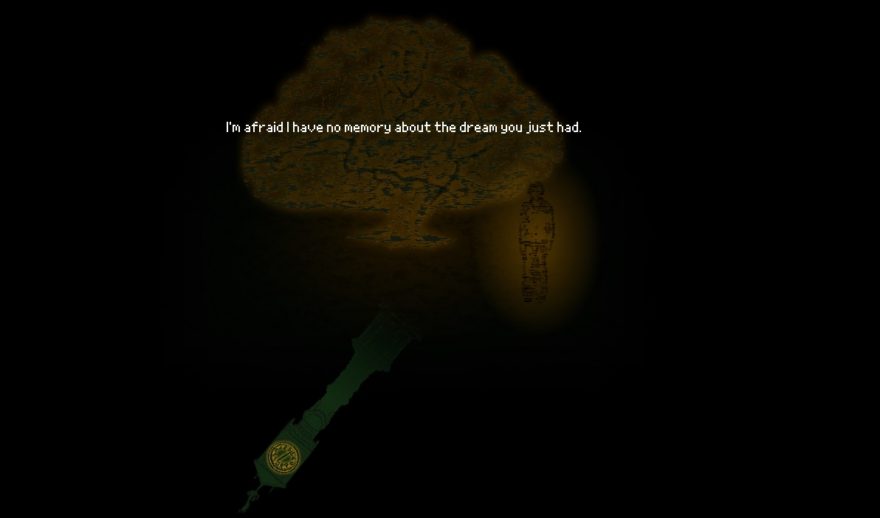 Dreams aren’t particularly easy to capture in any medium. Sometimes I’ll wake up convinced I just had a dream that I’ve actually had several times but never remembered before, and at the same time, I couldn’t tell you what happened in it. Given the complicated way memories of dreams work, and the uniqueness of those emotions, it’s not surprising that a lot of work tries to negotiate that uncanny space.

the line between inside and outside of the game gets blurred

Set in a sequence of your friend’s dreams, oOku doesn’t end up replicating the feeling you knew something but forgot it, but it does give you the sense that you’re building something out of inscrutable logic. And this is a feat: plenty of well-known and well-loved adventure games have puzzles that rely on obscure logic, but in the sparse landscapes of oOku, it feels like everything is there to help—to add one more piece. The game is ready to let you fail, but you can just as easily “fall back asleep” and try again, or rewind before you wake up. The looping of the dream familiarizes you with its rules, and the dream logic starts to fit together.

Playing with time—rewinding and fast-forwarding—also brings the musical themes into the forefront. Certain parts of the soundtrack help solve certain puzzle fragments, and sometimes you’ll hear lyrics sync up with what you’re doing on screen. Ordered like a kind of oneiric playlist, each dream has a different backing track, and these songs turn into something like collectibles. Solving secondary puzzles lets you separate from the dream world, achieving lucidity and “control.” From here, you can send out tweets about the game, or download its MP3s—the line between inside and outside of the game gets blurred, just like in the dreams it represents.

When I finished the last puzzle, I was pleased and surprised to learn that oOku, in its current state, describes itself as a demo, meaning that there’s more of this haunting dream-wandering to come.