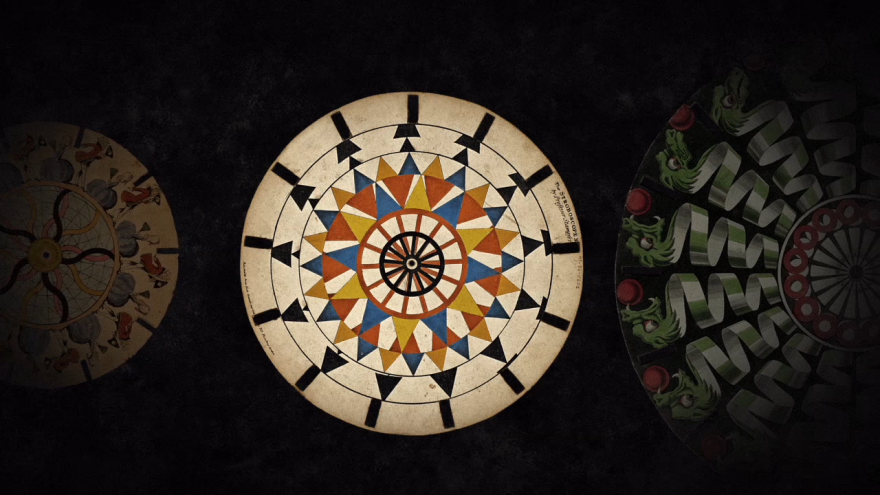 In 1878, famous industrialist Leland Stanford (yes, that Stanford) wanted the answer to a very important, deeply contested question: do all four of a horse’s hooves ever come off the ground when they gallop? So he did what all millionaires do and he spent money, commissioning the photographer Eadweard Muybridge to photograph a horse in motion.

The resulting series, known as Sallie Gardner at a Gallop, is perhaps one of the most famous early images and a precursor to the technology that would be used by the Lumière brothers in the 1890s to produce films. By taking 24 cameras and rigging them around a track, and creating a tripwire that would activate when the horse ran across it, Muybridge was able to capture 24 shots (in order) of the horse in motion and finding that yes, at some points, all four hooves are off the ground.

Optikammer is the story of weird and disparate research

Oddities such as this, and more, are the basis of Optikammer. A “playable poster” that showcases weird toys and artifacts from the 1800s, Optikammer seeks to bridge the gap between these interesting historical oddities and the ability to actually play with them.

If you found a Zoetrope (a “pre-film” animation device) from that era you wouldn’t really be able to play with it, to engage with it in the manner the the original creator intended. It’s fragile, an antique. Optikammer allows you to experience it in full motion, to bring the reality of the device to life in living color. These devices, so often intended for play but protected by glass are the given vibrancy and detail, even with their stuttered, time-specific animation.

Ultimately, Optikammer is the story of weird and disparate research, creators from around the world observing cartwheels through fence posts and bringing them together as an interactive exhibition. It gives life and color to these early prototypes, the precursors to everything from stop-motion animation to cat gifs.

Optikammer is coming in late 2016 for PC, Mac, Linux, Web. You can find out more on its website.