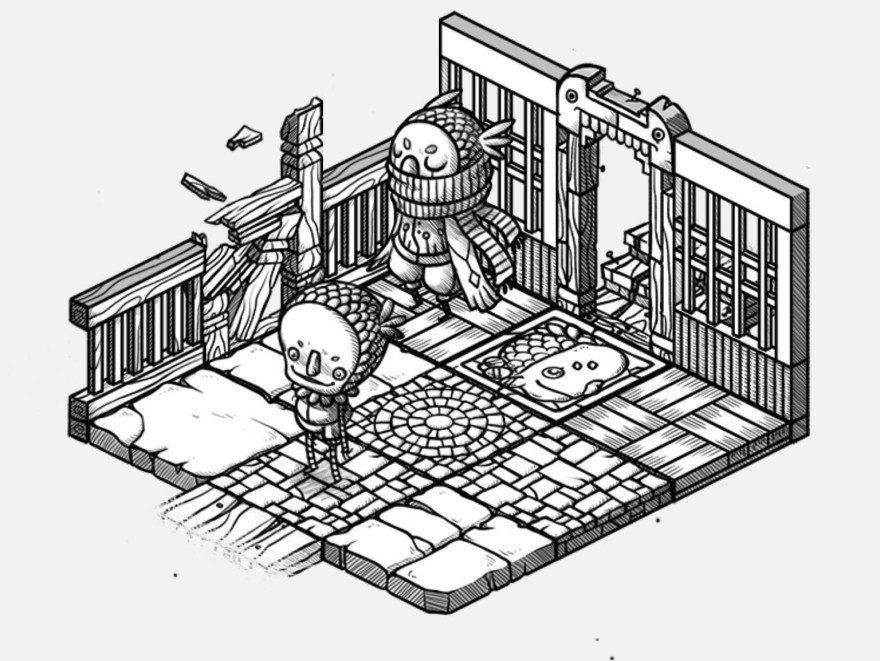 The mazes were always my favourite part. At the botanical gardens, at Ontario Place, on cereal boxes. Even that time I got drunk in Budapest and went way off course trying to find the road to my hostel. Any little labyrinth to lose myself in, and the more ornate, odd and original the better. The reward of getting home, or back to the hostel, and seeing weird things along the way.

But in games, mazes can be infuriating: a slog towards another finish line without access to all your senses. I cringe remembering The 7th Guests’ basement, a non-puzzle which had you waiting for an evil laugh to load every time you bonked a dead end. So why does Oquonie make the maze right where other games have done it wrong?

You’ve been dead dropped. You’re a strange looking anthropomorphic critter, half-way between a Jim Woodring joint and an Animal Crossing villager. If someone’s trying to explain what it is that you’re doing, it’s in ornate code, and you can choose to scratch your noggin or endlessly Google to make sense of things, or march forward in to the black and white, three-by-three unknown. So figure it out. It’s time to go without a tutorial.

The coveted left-hand-to-wall solution is pointless.

You have three slots to fill, and certain inhabitants will lend you a tile. Complete the set and you become a new animal, gaining access to certain doors. You figure things out by the few alternatives given. The environments are small, even claustrophobic, but it doesn’t make them any easier to navigate. On top of the odd aesthetics, there is no logic to the architecture. Going back through a door doesn’t mean you’ll re-enter the room you left. The coveted left-hand-to-wall solution is pointless: you can go in infinite circles by going where you think is full-steam ahead.

But that’s the fun of getting lost, isn’t it? Now is not the time to panic, it is time to find your way.

While it can feel impenetrable, Oquonie is about the reward of discovering the solution, even if it doesn’t feel like you’re solving a riddle, per se. It’s just a strange world, and everything is strange in it. You’re making your way through an Escher drawing, collecting what you need on a path that fights back.

When you do writhe, it’s because the game is being too vague for its own good. It’s one thing to be uncertain if you’re going the right way; it’s another to not detect if you’re making any progress. The little beacons and events that occur are so shrouded it’s hard to recognize if they mean anything substantial. After finishing one section, a red glowing obelisk appeared by the door. When it was MIA the following chapter I had a dull panic.

I don’t like Oquonie for all the reasons I’ve loved mazes. It’s not a mystifying sensory overload, but it does create little moments where the tug-chain on the lightbulb above your head gets pulled. It understands that a good maze is less about hitting dead ends and more about chiselling, deducing the correct path. Zelda’s Lost Woods tease you by flinging you to the entrance after every misstep, belittled for it. Getting lost in Oquonie is okay: it’s the entire point.