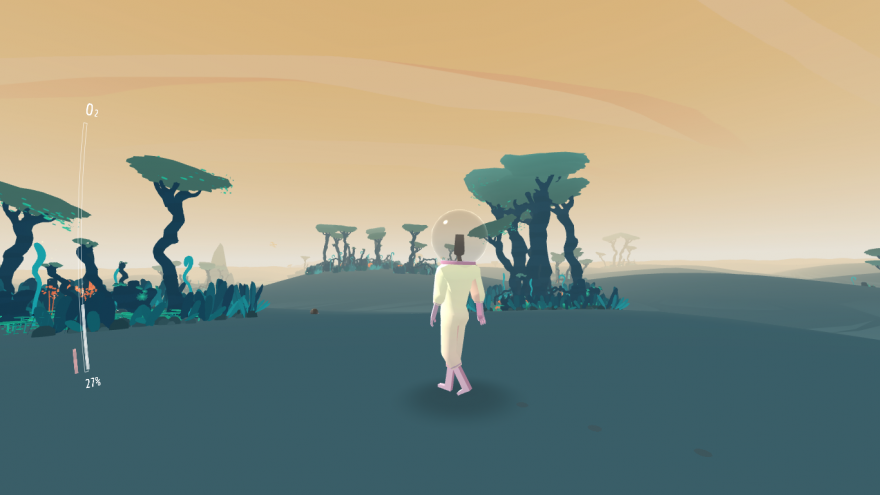 Be warned: This article spoils all the surprise of Orchids to Dusk that is so crucial to the first-time experience, so it’s best played before reading.

The fallen astronaut in Orchids to Dusk is not eager for adventure. You can see this in their hands, which are timidly held together, head shyly dipped towards them to create a tight prism of safety. It’s a pose familiar to shut-ins and the timorous. How it came to be that this person got as far as becoming an astronaut without the necessary confidence is unknown. Nor does it matter. Everything is ending now.

Typically, this astronaut would be bounding into the wilds, shipwreck in wake, probably shooting pulse rifles at giant plants and collecting space scrap to build a ship mere hours later. This is the videogame way. They teach us to keep going, to never stop, relentlessly gobbling up quests and targets and stat upgrades. It’s exhausting. Can’t we just fucking stop for a second? Orchids to Dusk let’s us. It recalls Merritt Kopas’s Lullaby for Heartsick Spacer in that it places value in inertia and self-healing. Yes, it’s a contemplative “wandering experience,” but the exploration here is only for the sake of finding somewhere comfy to rest.

the colorful swirls fly around your fishbowl helmet

In fact, you don’t just rest, you die. The only visible measure in Orchids to Dusk is the oxygen level on the left of the screen (and there’s no way to refill it). It’s a familiar sight for a videogame set in space or on an alien planet, usually being the part of the interface made to make you panic—a countdown to when you die. But here that meter may not actually end soon enough. It might be that you waddle over to one of the sporadic circles of alien vegetation and stop for a second, watching the colorful swirls fly around your fishbowl helmet, the shrubbery dancing nervously at your feet. As you move your mouse in orbit the astronaut will tilt their head to mimic your admiration of this calming oasis. Then something wonderful happens. They sit down.

It’s important that the astronaut settles like this on their own accord. There is no button for you to press; it happens through a short period of inactivity. Sure, it’s an idle animation, you might say, that’s hardly anything new. But unlike, say, Sonic’s impatient tap of the foot (“I’m waaaaaiting”), sitting down in Orchids to Dusk isn’t filler, it’s the next phase of the game’s short structure. You search the mostly barren landscape, sit down where you wish, and wait for the oxygen to run out. It becomes an experiential acceptance of serene futility. But here’s where it takes another unexpected emotional turn. Sit down for long enough and the game reveals an interaction that it didn’t tell you about before. You can take the helmet off.

This gesture meant a lot to me. Removing the helmet means surrendering the remaining oxygen and accepting death sooner than is necessary. Rather than wandering aimlessly in hope of finding a miraculous resupply of oxygen, delaying the inevitable, you can pull back, take a moment, and decide to die on your own terms. It’s like directing your own funeral. I decided to sit in the center of a small pocket of forest and relish the joyful theater of nature for the last time. Appreciating your surrounding beauty … that’s not a bad way to die, I reckon.

Here’s a game that’s saying no to all that

I think it’s that sometimes I get so exhausted of always staggering onwards through life that getting the chance to abandon that ceaselessness for once in Orchids to Dusk brought a tear to my eye (the gentle music by Marskye helped it happen). I wasn’t expecting that. It was a wonderful, touching realization for me. Look, we constantly push each other to press on, to deal with whatever shit is bothering us and move past it, no matter how bad, that’s just our way. Do we ever let ourselves truly savor anguish? Most videogames reflect this constant charge into the unknown, such as the recently released Fallout 4, which gives us hundreds of side quests to do before, during, and after the search for our kidnapped son. It never wants us or its main character to stop and contemplate the pain we should be feeling. But here’s a game that’s saying no to all that, do what’s necessary to make you happy, look after yourself when it’s needed. Sometimes you need to cry, let it all out, y’know? Orchids to Dusk also reminds us that the joy and beauty we’re after—that forever distant utopia—can be found now, all around us; it’s whatever we make it. But we’re gonna miss it if we’re dragging ourselves endlessly towards some obscure goal. That it lets you accept death and be at peace validates an alternative to the drudgery.

This is further expressed in what happens after you die upon taking the helmet off. When you do, the astronaut pops into non-existence, and then plants sprout to mark their resting place. Yes, each of these pockets of flora are, essentially, monuments to the deceased. What’s not immediately obvious about Orchids to Dusk is that it takes place inside a persistent online world, and so by dying in this way you’re leaving behind a leafy refuge for other players to stumble upon. However, there is another way to die inside the game. If you carry on strolling until the oxygen runs out then the astronaut will only leave behind a discouraging cadaver for other players to find. In my second playthrough, I had my astronaut curl up next to one of these bodies in order to keep them company in death. Needless to say it was a much more forlorn and lonesome ending than the previous one I had experienced.

Hopefully, then, many more people will choose to blossom rather than deteriorate, creating a pleasant forested world for future players to wander rather than a dried up bed of dead bodies.

You can download Orchids to Dusk over on itch.io.