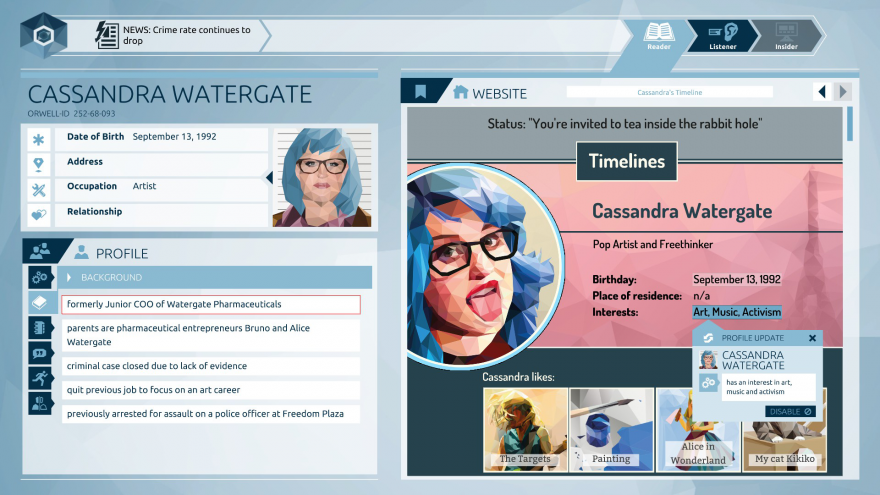 Part of the national security Safety Plan in Orwell’s world is a program that employs citizens to spy on other citizens. Aptly, it’s called Orwell. As a government spy in the game’s world, you’ll be able to scour others media presence—and chat conversations—for suspicious information. Creator Osmotic Studios started rolling out the five part story last week; the first came on October 20, with the second coming on October 27.

Episode three follows on November 3, with four coming on November 10, and the final installment on November 17. “The weekly release structure is a nod to the thriller nature of the game,” publisher Surprise Attack Games’s Chris Wright said. “I’m pretty sure we’re the first game to release in this weekly episodic format rather than the usual extended gap most episodic games have.”

Innocuous sentiments expressed online have serious implications for these characters when peeked in on by a set of stranger’s eyes. It’s intended, though; while Osmotic Studios has said it’s not trying to dish out answers, just ask questions. The studio certainly is asking questions, though those questions are so perfectly set up, with each suspect’s information neatly highlighted for you to select.

What we’re left with is an experience that feels so curated that it’s distracting, lacking the sort of nuance and implied danger of government surveillance—especially in a country with an ongoing series of terrorist attacks. So, sure: Orwell is asking questions, but those questions are far exactly what you’d expect from a game called Orwell. This is only the beginning, though. We’ll have to see what else Orwell has it continues to unfold over the next few weeks.

Orwell is available on Steam for $9.95. Episodes will unlock automatically each week.