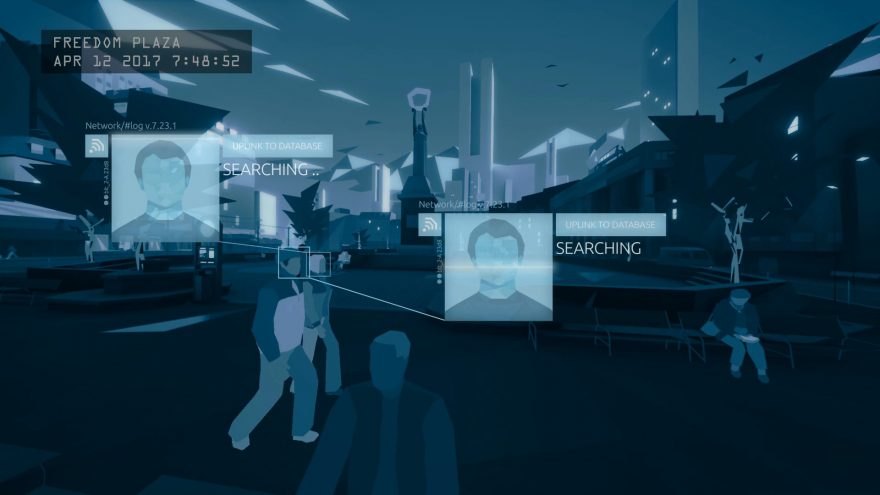 You might not be surprised to find out that Osmotic Studios’s narrative exploration game Orwell is firmly linked to George Orwell’s 1984 (1949). Orwell takes place in a dystopian world not unlike that of 1984; Orwell’s world is called The Nation—and security is the highest concern of the government. A series of terrorist attacks sparked a secret (and totally creepy) security program called, well, Orwell. And guess what? You get to control it. You’re Big Brother.

The whole game takes place on a desktop—think Her Story (2015) or Cibele (2015). Orwell compiles information from websites, messengers, and public records; it’s up to you to decide what’s relevant to your case.

It’s a game about asking questions—why was she in this place at that time? What are her possible motivations? Did you check her social media profile? You’ll ask lots of questions while creeping on The Nation’s citizens, but Orwell won’t give you answers; you’ll have to find those out for yourself, by looking through characters’ social media accounts, dating profiles, or personal websites. On a more invasive level, you’ll be looking through their private messages—stuff hidden deep in their cell phones.

You’ll probably feel uncomfortable asking the sorts of questions Orwell forces you to ask. That’s the point, though. The team over at Osmotic Studios is confident their game will be used as an “instrument to evoke all kinds of emotions in players,” Taylor said. “Perhaps even [our players will] feel like they never have felt before when playing a game.”

“We do feel like that in a way there is an urgent need to discuss these kinds of topics,” Taylor said. “As things go, it couldn’t be any more relevant now, with political parties making promises about security by increasing surveillance measures all over the Western world, just as it happens in The Nation.”

And it’s not only the Bad Guys who have something to hide online; almost everyone has an online persona to go alongside their offline life—Orwell focuses on the complexities of managing these (at times) conflicting personalities. It’s an exploration of the balance between security and freedom, of trading privacy for connection.

Orwell will be released in late 2016 for PC. More about the game is available on the Orwell website.