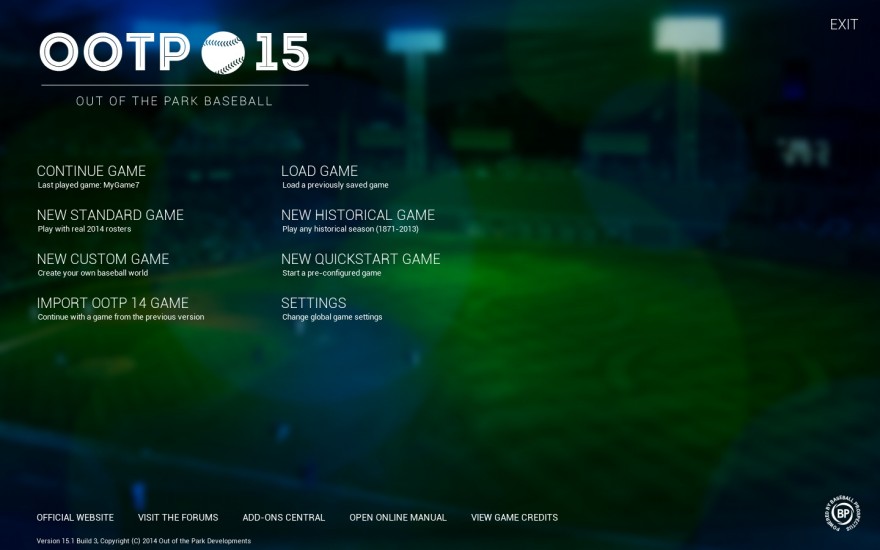 A few days ago, I very nearly cried over a picture of a baseball player.

The player on the picture was Ike Davis, a power-hitter for the New York Mets; he is celebrating a game-ending home run. Just a day earlier, Davis had been demoted from his regular spot as the team’s first baseman, and this was the first time he had had a chance to hit a ball since he got the news, his first chance to show that he was worthy of the first spot. In the picture, he looks relieved—like a man that has proven himself.

When I managed the 2014 Mets, in my own version of baseball reality, Davis never had to prove himself. As my first action as a GM, I traded away the player that replaced him in reality and watched how he—Davis—became one of the best hitters in Major League Baseball. When all of my millionaire players had gotten themselves injured, it was Davis that pulled through. A very good case could be made that Davis’ dependability and consistent performance was the one factor that saved the Mets from ending up last in the division, under my incompetent leadership.

To see him prove his worth to a world that doesn’t love him like I do was emotional—surprisingly, but genuinely.

Starting a new game of Out of the Park drops the player in front of a menu-screen filled with information, names, numbers and very little instructions. It is a few days before opening day of a new season of Major League Baseball, and the player, in control of a Major League team of her choosing, has just enough time to make last minute adjustments to her roster of players.

This is Out of the Park’s main mode of interaction, perusing long lists of players—your team, your minor league talent-farms, potential recruits, promising high-schoolers, opponents—spreadsheets of names followed by an impressive amount of numbers representing current and potential abilities, and an overwhelming amount of statistics covering every possible angle of a player’s performance.

The secondary mode is that of playing actual games of baseball, putting one’s carefully created lineup to the test. However, as the fantasy this game presents is not that of a player but that of a manager, the only interaction to be had here is deciding when to put in a new pitcher to replace the old, and to shout vague instructions from the sidelines—”throw the ball” or “keep an eye on that guy when you throw the ball,” essentially. Thankfully, given the time it takes to play through a game in this way and the 160 or so games a club plays in a season, there is a robust set of tools to make the interesting decisions beforehand and let the computer play the game out for you.

This is a strategy game, but not really by design.

This gives the game a strange rhythm—the player sets up her team to her liking, browsing through lists of statistics and ratings, and then pulls the lever. The game then responds with a result and a recap of the game—who succeeded, who failed, who made the big plays—and the player gets to pull the lever again; it has both the addicting quality of a slot machine and the satisfaction of a well-tuned machine. This is a strategy game, but not really by design. It is a very good representation of being a baseball manager; it just happens that being a baseball manager is a pretty good strategy game.

At one point, the game stops to tell you that a specific system does not work in the exact way that it does in real life. In other words, this is a game that at one moment, and only that moment (salary arbitration, if you wondered), makes you learn something that is only relevant inside of the videogame. It goes out of its way to note this. Otherwise, your real-life knowledge and experience from outside the game will transfer perfectly to the game’s systems, to the point where I stopped googling for guides to the game and simply looked at wikipedia articles for real baseball when I was stumped. As soon as I learned how the reality of baseball works, the interface instantly made sense, and I could implement my knowledge of actual baseball into the game without any hindrance.

As far as I can tell, this is about as perfect a simulation of baseball management there could ever be. However, even if this game completely represents the fantasy of being the GM of a baseball team, the question of whether or not that is a fantasy worth living remains.

Living in Sweden, my opinion on baseball was, until recently, the same as many of my countrymen—placing it somewhere between playground game and silly thing that Americans do to forget their capitalist nightmare society. It is not a sport that garners much attention or respect in these parts of the world.

But then I played Football Manager 2014, the soccer equivalent of Out of the Park. I came away from that game impressed by how well it conveyed the beauty of soccer; a game that flows without breaks; with 22 players sweeping across an open field in intricate patterns; waves emerging organically from the abilities, personalities and instructions of each individual; every rule a minimalistic disturbance that sends ripples through the rest of the game.

Baseball, on the other hand, is not beautiful. There are no interconnected systems that collide, and no emergent waves that sweep—it is simple, straightforward, full of breaks and a bit dumb. Football is like the grand interdependent systems of an economy, baseball is like a long series of coin flips.

The flip side is that unlike football, where simple mathematics never really suffice to encompass anything, a baseball player can be very neatly represented by statistics. When a batter steps up to have a ball flung at him, a bystander can instantly, with the help of a few numbers, learn who is the underdog, who is in a slump and who is overperforming. Baseball is all about this easily graspable information, the stuff that human minds can’t not wrap stories around. It is in every level of the game—the batter vs. the pitcher in the short term, the two teams battling in the mid term, and a team’s journey throughout the season in the long—all helped along with a ton of numbers.

Baseball, on the other hand, is not beautiful.

My memories of playing Out of the Park are all couched in numbers—the 0.2 OBP, 0.8 OPS hitter that almost never hit, but when he did sent it out of the titular park; the closer that held a 1.5 ERA going for most of the season; the time my Mets were down to 0.39 winning percentage, but came back up to a 0.49.