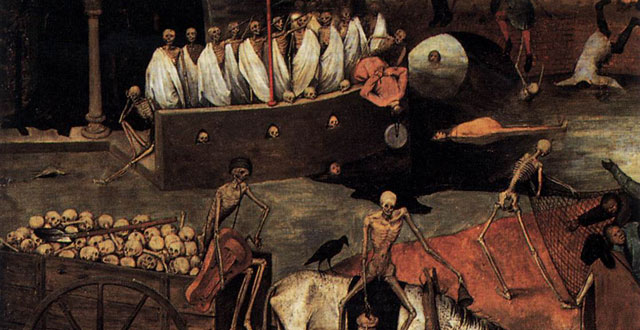 Something strange was afoot in Ironforge. The multi-million member community of World of Warcraft was under attack by its own—a plague outbreak! After defeating the end boss Hakkar in the new dungeon Zul’Gurub, a curse known as “Corrupted Blood” began to systematically infect each and every member of the Warcraft universe with a mix of tragic, strange, and bittersweet outcomes.

Rutgers epidemiologist Nina Fefferman was sitting on her sofa when she first heard the news, but she and her colleagues quickly dove into the fray to study the impact of an unstoppable virus on an online community. Two published papers and a recent Game Developers Conference talk later, Fefferman has drawn connections between the Corrupted Blood outbreak and the real world of disease spread and prevention. We asked her about what happened, who was affected, and what epidemiologists can learn from the guilds of Warcraft.

What was the timeline for the outbreak?

I don’t know all of it well, because I was there as an observer and we’re taking notes. A new area opened fairly innocuously and one of the monsters had Corrupted Blood. Initially what happened was accidental. Someone summoned their pet and banished it, but didn’t realize their pet remained infected. They went back to their guild or marketplace and then resummoned their pet, which cast Corrupted Blood in an area with low-level players. This was in Ironforge, I believe. And so from there all hell broke loose.

The big thing is that the non-player characters caught it. The NPCs are incredibly robust, and having them stand around infecting people was very effective. They were all Typhoid Mary in her carrier state. Within six hours, nothing was normal. No one was questing. Guild halls were shut down, or people were running around infected. It essentially stayed confusing and chaotic for three days. When they rebooted the server, it was gone patch. But people were asking if it was gone and wouldn’t log in.

I talked to Blizzard the entire time. At first, they didn’t know what they were supposed to patch and they were scrambling to fix it. They did sound to me like the conversations I have with my colleagues at the CDC or Homeland Security. They were asking questions like “Does anyone have any tools?”

Is there anything like Corrupted Blood in the real world?

It’s kind of like Ebola, but it’s not really like anything. There’s nothing that has a certain spatial radius of 100-percent effectiveness. As epidemiologists, the fact that it’s not like any one disease doesn’t compromise its utility, though, if it elicits the same social responsibility or scare reaction. If I went to Manhattan and yelled, “Ebola is coming,” and someone would actually respond, they would respond the same way—because they think everyone catches it and you bleed out from your eyes. Ebola originated from exposure to an infected animal in a jungle region. This continued the transmission, and it has cool parallels to Corrupted Blood.

Now there was something weird with the bodies?

The bodies stuck around a while. Normally, the bodies disappear in Warcraft, but instead, they decomposed into skeletons, and it was a chilling effect. Normally, in a battle area, there aren’t bodies littered with player characters.

What about griefing? I’m presuming not everyone was on their best behavior.

The biggest one was maliciously infecting people. There were people who got infected and then showed up in infected areas. But, of course, griefing takes on as much diversity as there are human endeavors, so there were people teasing each other and people casting random spells to make the world look cool. These were people that enhanced the fear by accident, because it played into an understanding of something like the Black Death.

There was one guy on the steps of a building and proselytizing the end of the world. My guess is that he was doing it for jokes, but if you’re in the middle of it with your friends exploring a world covered in blood, then there’s something in our understanding of the Black Death in the Dark Ages and people announcing the coming of the end that plays into the social fear. Some people deliberately infected their guild, but afterwards, they got banned, so there were social repercussions for behaving badly.

But is that behavior useful to study?

Separately from the risk proposition, we can learn from the risk and from griefing. There’s some misconception that griefing wouldn’t happen in the real world. But that’s not true. It’s just motivated differently. Typhoid Mary was a griefer. It’s not that she was malicious out there, but she knew she was sick and she didn’t stop. The city of New York said that she couldn’t be a cook, and she didn’t stop.

There are malicious people spreading diseases too. There’s “Patient Zero,” the airline steward, in the ’80s, and the HIV community credits him with advancing AIDS for ten years. He told people that his motivation was to spread the disease, and he was being destructive. This was before we knew what AIDS was, but they knew it was a death sentence and a sexually transmitted disease. He was promiscuous without warning his partners in a way he might not have been had he been healthy. Then, there’s the multi-drug resistant tuberculosis guy. His doctor told him he shouldn’t fly, but then he flew to Europe. So while you get a narrow swath of those behaviors from angry 12-year olds, there are all sorts of things that griefing translates into for the real world.

For the high-level players, infection wasn’t devastating. It was meant to be an annoying extra challenge for high-level players anyway, so getting infected was not as scary for those people. There were people who were healers who were excited, because they could easily boost their XP. In the real world, those people are like doctors who are caregivers but also disease super-spreaders. Same with these people—they were forwarding the epidemic by healing, but also recasting Corrupted Blood.

Was there skepticism from your peers?

From our peers, not so much. They understand what it is that we’re trying to do, because we’re trying to do something more ambitious. We’re looking for inspiration, insight. We’re not looking for particular ratios, or particularly for direct analogies. Studying these worlds isn’t one-to-one, but that doesn’t mean it’s not important. The most surprising things for us were behaviors we hadn’t considered, such as people exposing themselves to disease risk knowing that they might die from it. Death is a different risk proposition in a game, but some of the death behaviors in the game were useful.

There’s some misconception that griefing wouldn’t happen in the real world. But that’s not true. It’s just motivated differently. Typhoid Mary was a griefer.

For example, there was some uncertainty about whether the plague would affect your character status. If you’re worried about exposing yourself to something life-threatening, we now have to do behavioral and social psychology. But there are really good analogies just from people being curious. In our models, we hadn’t been considering political oversight or journalism that cause people to need to get into the outbreak site in a controlled way. We just hadn’t been considering that in our panning.

So now, if we’re planning the next outbreak of something bad, we now know that the things we need to include are of a practical nature. Do we need a separate quarantine area for them to let them get in or out? Do we need journalists so dedicated that they may need to be in the full quarantine? Those questions are really valuable, and came directly form observations in World of Warcraft. Not that there were journalists, but people were calling each other and saying, you have to see this.

Since you didn’t design this, what was the benefit of this occurring organically?

We’re working with virtual worlds to do controlled experiments for specific questions, and we are interested in running those—but they’re only useful for running specific questions. Because it was clear to the players that this was not something normal, there were a couple people snarking that this was something of Blizzard’s doing. It was the equivalent of lunatics in conspiracy chat rooms. They were saying that this was a way to reset the servers at a player level. But a day of it screwing up the server put that theory to rest.

This contributed to the emotional sense that something out of control was happening. We couldn’t design that. It’s not that you can’t do something cool on your own as a researcher, but we wouldn’t get the same behavior for a real endogenous risk.

All told, how helpful have games been to you as an epidemiologist?

It’s like people say when you’re drunk—it’s not you, either. Games are a more extreme version, because you can role-play in a different light, but still your sensibility and your moral core is there, especially in these big games that go on for years. If you’re a level 60 paladin, that’s something you’ve put a lot of work into, and you’ve got friends of that character. Even if you wouldn’t behave that way directly, that’s how you interact. It’s a glimpse into people’s personality.

Image from The Triumph of Death by Pieter Bruegel the Elder