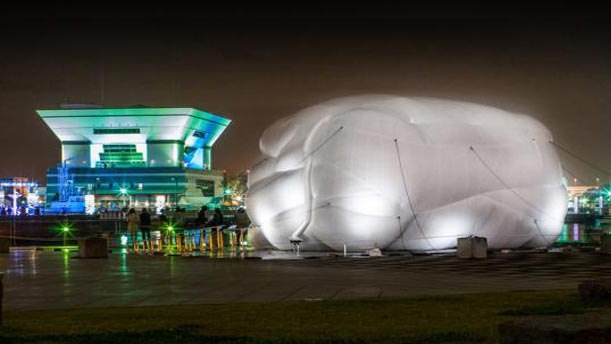 Croatian-Austrian design collective Numen/For Use has created a new kind of public exhibit called “Net Blow Up” that invites visitors to explore an inflatable cloud-like pavilion filled with layers of intertwined nets. Due to its softness, the pavillion deforms and mutates with every movement of its temporary habitants, while the outer membrane allows onlookers to see what’s going on inside “the cloud.”

Net Blow up is a further development of the earlier Net project in means of construction and appearance. The earlier exhibit used nets to create an op-art social sculpture – or community hammock depending on your perspective – related to topics of instability, levitation and regression.

The group first formed in 1998. as a collaborative effort of industrial designers Sven Jonke, Christoph Katzler and Nikola Radeljkovi? under the banner For Use. Since 2008. the collective turned its focus towards configuring objects and concepts without a predefined function, an activity resulting in the more hybrid and experimental works seen today.

This post was originally written by Ross Brooks for PSFK