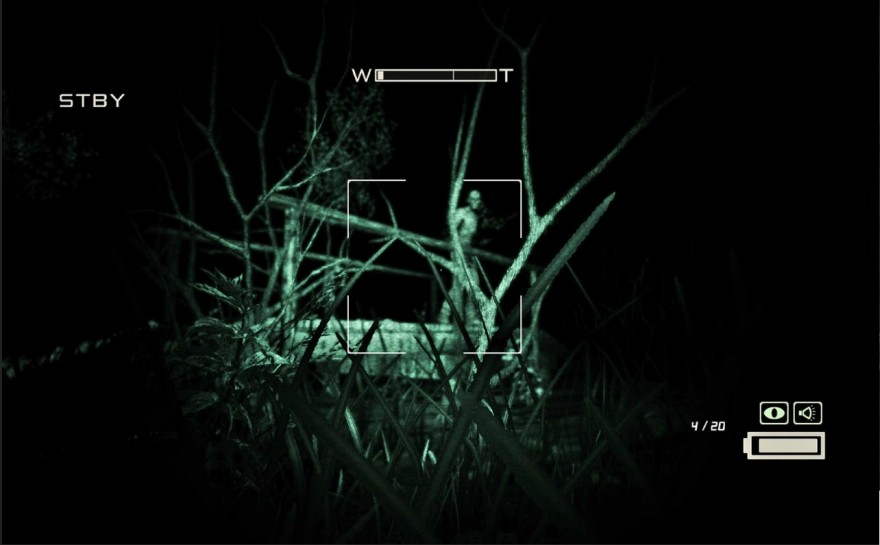 Both parts of the phrase “survival horror” are supposed to be equally important. There is no dead weight in it. But today, more often than not, what we have is “action horror,” which offers multiplayer in place of solitude and emphasizes gunning down mass enemies rather than building tension through hopelessness.

It’s easy to be skeptical.

Outlast is different, but it’s easy to be skeptical. Its biggest PR story is about someone fainting at E3, which is the same kind of hype Paranormal Activity used to sell its brand of fear. But this is real, not sensational. Red Barrel’s new first-person survival-horror game for PC focuses on the root meaning of the genre: the fight to survive in the presence of overwhelming horror. It’s only five hours long—or at least, that’s how long journalist Miles Upshur rolls his camera while inside the haunted Mount Massive Asylum—which leads to more intensity and less filler.

In theory, at least. Survival horror is easy to get wrong and just as easy to mishandle. Even when the scares are good, the controls are often bad, indicating failure in design while also feeding into the idea that survival is about a loss of mechanical control. Outlast ditches that cliché. The only clumsiness about its controls is that you need to hold down the key to crouch, and there’s an option to toggle that.

Make no mistake: Outlast is still about a loss of power, but because the physical controls aren’t pointlessly obtuse, little distracts players from the horror surrounding them. Rather, survival becomes a matter of instinct and gut response—not how well players can move in their environment but how they use it. Where they can hide, where to flee. With a pair of headphones on, it’s easy to forget about the keyboard or controller separating them from the events onscreen.

They offer a false sense of protection: the screens won’t save you in the dark

Layers do remain, however: the glass of Miles’s camcorder, like the glass of the computer monitor. These are the lenses through which both Miles and the player view the asylum in order to discover and record the secret, terrible truth of what happened (and still happens) there. They offer a false sense of protection: the screens won’t save you in the dark, and neither will your role as a journalist. You, player, are no longer a neutral observer; you’re dragged in. The camera lends a sense of voyeurism and creates the sickening feeling that whatever horrors you’re about to witness, you invited upon yourself by seeking them out.

That’s the curse of the entire game. Less than an hour in, Miles wants nothing but to escape, but he can’t resist his curiosity. By pushing the investigation, you flirt with death, which creates a rare sense of involvement.

The trip through the asylum is pared down to essentials—no exposition, no weapons, only legs to carry you and places to hide. The wind howls through dry leaves and floorboards creak loud enough for the entire asylum to hear. You read daming internal documents, but Miles’s hand-scrawled notes eventually reflect a psychological degradation of their own. The camera’s night vision mode illuminates areas of pitch darkness, but the batteries drain quickly, and they’re in short supply. The impotence is absolute. There isn’t even a map, which, in a weapon-less game, leads to countless chase scenes through unfamiliar environments.

This can be confusing to the point of frustration, but then, running aimlessly is part of the horror, more well-executed than careless. To regain your bearings and see through the blur of night vision, you must stop running, quiet your movements, and improvise in your environment. Isn’t that what conquering our fears is about—learning how to not panic?

This, I realized, was not fun. It was something else.

Still, Miles shows signs of duress. His breath will grow ragged; his heartbeat will quicken when enemies are near. We make him sprint wildly from room to room, hall to hall, without a plan or hope—and yet we stay alive. At one point, I stepped into the black of night outside the asylum and watched lightning flash through my night vision, terrifyingly beautiful as it revealed an evil worse than anything in the asylum. I was powerless and lost. This, I realized, was not fun. It was something else.

But then, maybe we’re not looking for fun. No matter how scared we are of the dark, our need to conquer it—to triumph over it—drives us forward. We want to say we got through it. That we were strong. Swallowing this fear is a bigger, more primal experience than other games can bring us. This is why survival horror, and so Outlast, are important. Outliving the nightmare allows us to hang on to the hope that maybe we’d be so brave in real life.