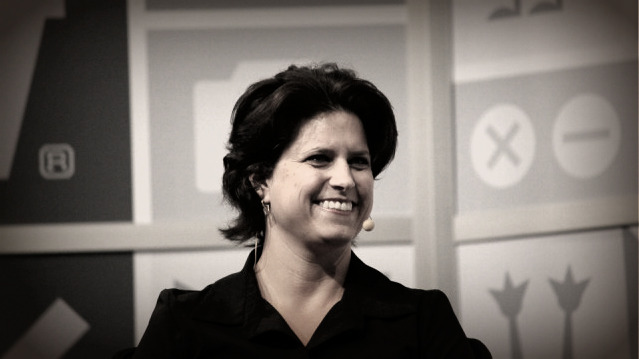 Looking back on glam rock and big hair in general, all those jet black and pearl white lion’s manes seem ridiculous—or at least impractical when considering the amount of bleach and hairspray. If the OUYA has anything to say about it, in twenty years, when we look back at the chunky black boxes that dominate our television cabinets, we’ll be thinking the same thing.

Sitting at three inches cubed, the OUYA console makes the rest seem operatic. Released today, it’s but a fraction of the heft, and cost, of a PlayStation 4 or Xbox One. Plus, it’s beautiful, hackable, and all the games are to some extent free, at least to try them.

We talked to OUYA’s Julie Uhrman about shaking things up in the living room.

KILL SCREEN: It’s been a wild ride for you since OUYA was ceremoniously Kickstarted last July. Now that the release is imminent, how do you plan to party?

Julie Uhrman: I’m going to be in New York City for the launch. I’m going out to a nice dinner at Mario Batali’s, the iron chef, to celebrate. It’s been a long run. I think I’m going to splurge! I’m a big Italian fan. I’m told I have to order the bucatini all’amatriciana.

“I’m certainly no Steve Ballmer yet!”

KS: One thing you probably don’t get so much of, being the CEO at OUYA, is the weird aura of celebrity that surrounds other presidents of game companies. You know, cheering fanboys fist-bumping and high-fiving Nintendo’s Reggie Fils-Aime.

Uhrman: I’m certainly no Steve Ballmer yet! Ironically, I didn’t live my closest brush to fame. I have a twin sister—she looks just like me—who’s at Activision. My greatest moment was when she walked into a sales meeting with one of the US’s top retailers and they looked at her and were like, why is the CEO of OUYA here.

KS: Yeah, OUYA definitely has this reputation as the rebel console. Didn’t the cops get called on you guys at E3?

Uhrman: There was an issue with our signage. It was resolved very quickly! Nothing illegal.

“I pretty much binge television.”

KS: How about you? Is there anything about you that screams rebel?

Uhrman: I think being an entrepreneur is the definition of being rebellious.

KS: What’s binge-worthy to you?

Uhrman: I’m eagerly awaiting the finale of Breaking Bad. I feel like it has sucked too much of my life away and I just want it over. But I’m waiting until the season is done so I can binge it.

KS: Doesn’t launching a system get in the way of watching television?

Uhrman: I was away on business for two weeks to Asia and Europe, and during that time I went to town!

KS: I noticed the campaign slogan is The Revolution Will Be Televised. Do you think Gil Scott-Heron would’ve made a good spokesperson for OUYA?

Uhrman: I dunno, I like our players being spokespersons for us.

KS: Whose idea was it to call the buttons on the controller O, U, Y, and A?

Uhrman: Totally our supporters. The original design had different color circles. Because openness is so important to the fabric of what OUYA is, we had O’s on all four buttons.

But I received a number of emails saying how 8% of men are color blind, and that they’re not going to know which button to push. Around that time, there was a poll on Reddit where they asked what the buttons should be.

SXSW image via Techcrunch. Thank You image via Pcutler. OUYA buttons via Urustar.