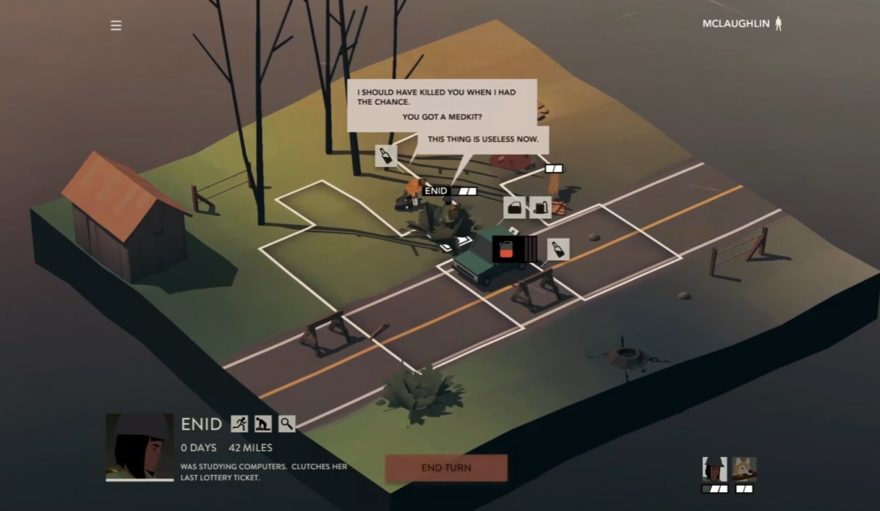 It is the end of the year but not the end of times. This means that our minds are being coaxed to look beyond the little that is left of 2016 and towards 2017. What is there for us in this future year? According to the 1987 Schwarznegger film The Running Man, a dystopia is what awaits us, spearheaded by a new show about criminals trying to escape the clutches of professional killers. That doesn’t seem so far-fetched, all things considered.

But forget the doom and gloom for just a sec—we have videogames to talk about. In the past 24 hours, videogame label Finji has confirmed that two of the games under its wing will definitely be coming out in 2017. They are the post-apocalyptic survival game Overland and the ennui-cum-mystical adventure game Night in the Woods. Yes please, thank you very much.

There’s a chance you’ve already played Overland given that its limited, paid alpha program started way back in April, when the world didn’t seem so … how to put it … screwed. Since then, Finji has been updating it with new features, including new character models, loadsa new items and traits, Twitch usernames and in-game chat, and also a Night Mode. Yes, it gets dark in there now, which is something that Overland‘s new trailer focuses on showing off. Give it a look below, and watch out for the good boy called Mustard, who is doing so well at holding a stick.


The gist of Overland, if you don’t know, is to “make the most of a terrible situation.” It’s a road trip through North America after everything has gone to shit. You put together a squad and attempt to survive as you travel through its procedurally generated dioramas. If you’re lucky you’ll find gas for a car, maybe a dog to help carry sticks, and avoid the patrolling nasties that are out to rip you apart. It’s the kinda game you’ll remember for those close calls, when you somehow steered clear of death, probably because one of the dogs jumped in and saved the day. Look, the dogs are really good in this game, okay?

the dogs are really good in this game

Anyway, on to Night in the Woods, which also has a new trailer to celebrate its confirmation for a 2017 release. What’s notable about this trailer is that it’s the first one that its team at Infinite Fall has put out since 2014. And, if you keep your eyes locked as you watch its many scenes fly past at the speed of light, you should see some new stuff. Are you ready? Okay … GO!


I’ve played a little bit of Night in the Woods and can confirm that it has very a good baseball bat swing. That’s important for a game about being bored in a small town where the only entertainment for a young adult is smashing shit up in a junkyard. You play as college dropout Mae, the rebellious cat on show, in Night in the Woods, as she returns to her hometown to find her friends have moved on from their teenage years. Mae wants to shoplift and hangout, but they have jobs and don’t feel quite so up to breaking the law. It’s among this that something mystical then goes down in the woods that presumably grabs Mae’s attention.

With games like these coming out in 2017 maybe it won’t be such a terrible year after all? One can only hope.

Find out more about Overland on its website. Same goes for Night in the Woods—visit that website.