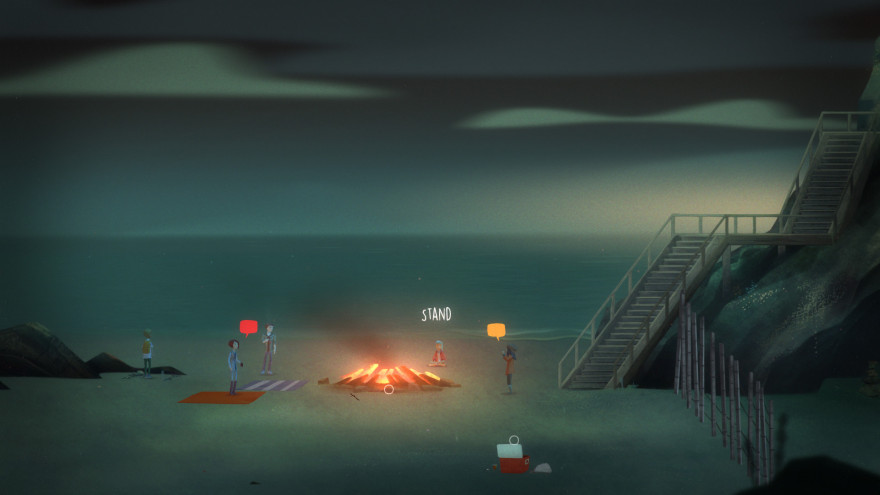 The internet has been quietly buzzing about Oxenfree. Its status is held as the next über-cool opus of teenage ennui. But, for a second, forget all of that. Let’s just look at the damn thing.

Oxenfree takes place on a small island in the Pacific Northwest; a tourist spot frequented after dark by local high-schoolers who go there to party. The scale and beauty of the place are often breathtaking, with hills and cliffs that rise high over the ocean, beaches that open onto uninterrupted sea, and giant caves that hide creepy illusions. Walking trails crisscross the island, taking Alex and her friends from waterfalls to dense woods to open meadows, all dotted with hints of the former lives that were lived there, stories to explore along with the landscapes.

For a world that’s rendered in basically two dimensions, there’s a surprising amount of depth to each frame. Trees and old buildings loom behind the hills Alex crosses, half covered by the purple darkness that’s closing in on her. The group’s figures are reduced to quaint miniatures against that backdrop, and their colossal surroundings thrum with a kind of Emersonian life. It’s an environment that invites wonder, and every scene feels edged with a little extra magic, a certain sparkle or a trick of the moonlight. For Alex’s best friend Ren, that magic might also be baked into some brownies he brought along; for the rest, it’s stashed in a cooler that Nona’s sister stocked for the trip. To be sure, wherever they intend to seek it out on the beautiful Edwards Island, this magic has nothing to do with teenage ennui.

You go there to forget all your teenage bullshit

To be clear, this is not a place you go to rehearse your teenage woes—it’s where you bury them, under fun and friends. You head to the beach and cover up that bad taste in your mouth with cheap beer and cigarettes. You go there to forget all your teenage bullshit. That’s exactly what Oxenfree’s group of friends intend to do as they participate in the time-honored tradition of staying overnight on Edwards Island and getting a little sloppy by the sea.

The story kicks off with Alex riding the ferry with Ren and new stepbrother Jonas. Alex is cool and somewhat detached, lost in thought when the story opens on her. She leans over the railing absentmindedly as Ren chatters in the background, not missing a chance to comment on everything from the voice on the ferry loudspeaker to the quality of the sugar cookies in the Edwards Island gift shop. Jonas tries hard to keep up, but he’s clearly feeling uncomfortable as he navigates his way around Alex’s circle. Later, you meet up with Nona and Clarissa on the cliffs descending to the beach. Nona is soft-spoken and seems genuinely nice, but Clarissa is itching for a fight from the start. Never satisfied, Clarissa possesses a well-cultivated air of condescension, always ready with an eye roll and seemingly unable to be cool for even a second.

Whatever the state of affairs between these five, they all agree on one thing: tonight is not the night for heart-to-hearts or tearful talks about the future; it’s time to be young and have a good time (cue Japandroids song). Oxenfree’s Edwards Island turns out to be a perfect figure for this liminal adolescent space, somewhere close to but sufficiently separate from the pressures of the workaday world. Civilization waits cruelly in the wings while you, as Clarissa puts it in the game, “lay on the beach and drink until you can’t remember where you are.” The subject of college or anxiety about the future peek in occasionally, but they’re quickly deflected, scuttled by a groan or some self-consciously witty turn of phrase.

This is part of what makes the “teenage drama” aspect of Oxenfree so special: that it manages to only ever deal with it briefly or obliquely, choosing instead to foreground these high-schoolers’ pursuit of some Dionysian mandate. That doesn’t mean that the confusion and alienation we typically associate with adolescent angst aren’t present, but held at this safe distance, they suffuse into the story and dialogue much more organically, adding a warm glow to the narrative rather than commanding it.

every line has to be a zinger, every phrase a pose

Much of the game unfolds in dialogue, which Night School Studio patiently develops into a science. The ebb and flow of conversation is determined by the meanderings (aimless or otherwise) of the team on Edwards Island. Finding new areas or bumping into new people introduces different threads and causes casual interruptions, reminding players that conversation in real life often evolves in fits and starts, dwelling too long on this or skipping quickly over that.

The words themselves are also very finely tuned. They conform easily to the rhythms and inflections of high-school-ese. Almost every sentence carries with it a tacit plea to be seen as cool, and thoughts don’t seem to have any value to Alex’s friends unless they can be fired off with a smirk and a wink—every line has to be a zinger, every phrase a pose. The cumulative effect of this might be a little too sweet for some palettes (admission: I felt this at times), but it’s undeniably true-to-form for teenage jawing.

Of course, it’s not long before things start going wrong, and the annual bash on the beach is interrupted by powers beyond our ken. Playing with signals on a small shortwave radio yields some surprising results while exploring a cave near your bonfire, and a whole parallel realm of paranormal forces and figures collides with the real world. Radio technology has always hinted at parallel realities—inviting you to consider the invisible world of information and sound traveling through the air around you—and as a result, the introduction of this media makes for an elegant twist, unraveling a supernatural story out of otherwise typical teenage interaction. Oxenfree harnesses these chills deftly, channeling them into a heady mix of environmental horror and personal anxiety.

In the end, Oxenfree is absolutely a game about teenage bullshit (forgive me for being a little disingenuous earlier). But it manages to revitalize that narrative by focusing on feeling more than substance; it glances at each character’s inner struggle rather than serving it up for a full meal. The supernatural side of the story carries some of the weight here as well, mirroring Alex’s own story of grief and isolation even as it performs the work of all good ghost stories: reinterpreting your immediate surroundings and enchanting the mundane. If you’re looking for a story that valorizes adolescent struggle by iterating all of its existential complaints, you’d be better off looking elsewhere. But if you miss the naïve wonder, the warmth of lifelong friends, and the thrill of still having rules to break, Oxenfree can take you back.