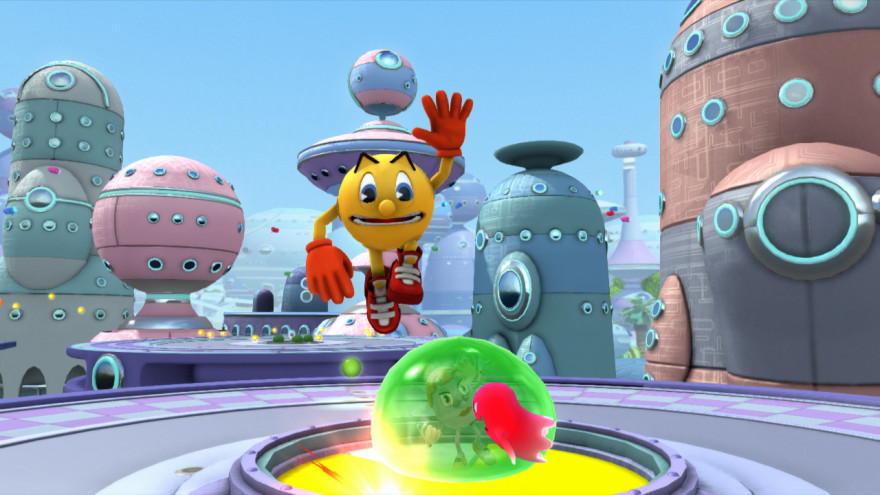 Title:
Pac-Man and the Ghostly Adventures

I’ll be honest: When Pac-Man and the Ghostly Adventures first started up, I didn’t care that the game really had nothing to do with its namesake. It didn’t bother me that Pac-Man had been pushed into a platformer—not for the first time in his career, either—jumping around cities and inside volcanoes instead of traversing mazes. Or that his sworn enemies were now side-kicks and comedic foils.

In fact, I actually kind of liked it. The set-up itself is silly. An evil ghost named Betrayus has sent his minions to attack Pacworld, and Pac-Man is the only… well, whatever he is… that can stop the invasion. He runs, grabs power-ups, and jumps through various colorful levels, and he does it all competently enough that I was initially nostalgic for the days when 3D mascot platformers, not gritty shooters and ultra violence, were gaming’s biggest draws.

That’s not to say that Pac-Man isn’t disturbing in his own way. His monomaniacal need to consume every possible item while outrunning his demons for as long as he can has always been kind of tragic, and the gluttony is taken to another level here. He violently bites vending machines in order to knock out hamburgers (these vending machines, it turns out, actually exist), chomps down fruit and metal coins, and collects the eyeballs of every ghost he ingests before sadistically burping them out in a massive wave at the end of every level. Pac-Man’s a pretty gross individual, and all the power-ups offered grant the yellow ball new ways to devour his enemies.

These new abilities are put to varied use, but while our rotund hero smoothly struts from hidden temples to neon-infused obstacle courses, the one thing that’s missing is any sense of dread. That might seem like a strange thing to expect, but what’s Pac-Man without the dogged enemies on your heels? That feeling that you’re scrambling like a fiend, knowing that any hesitation or wrong turn could result in instant death? All those pellets, pretzels, and fruit you’ve worked hard to grab could be gone in one or two mistimed dekes; that’s some serious tension there, and it’s only heightened by inspired reinventions like Pac-Man Championship Edition DX.

All these abilities power up our hero just enough to let him do what every other platformer has already done.

None of that exists in Ghostly Adventures. You’re still chasing down numerous things to eat, but even for a game whose intended audience skews young it all feels very safe. Fire ghost nearby? Cool it down as Ice-Pac. Fire balls melt frosty ghosts, while another costume lets you swing from platform to platform. All these abilities, then, power up our hero just enough to let him do what every other platformer has already done. It’s telling that when the game starts, Pac-Man eats whatever he can find in recycling bins: Chances are there’s nothing here you haven’t seen before.

It’s not just that the adventure is easy. Super Mario doesn’t really give players a hard time anymore, but it still has a feverish energy to it, and the new Rayman titles are even more deliciously manic. With Pac-Man, though, there’s little sense that what you’re doing is important or, for that matter, entertaining.

Deep down, Ghostly Adventures knows this. It’s why Pac-Man yells, “Awesome!” or screams, “Awww YEAHHH!” every time he uses a pipe to warp to the next area, like he’s trying to remind you of how much fun you’re having. As my initial surprise at playing a new mascot platformer on the PlayStation 3 drifted away, I was mostly reminded of how difficult it was, and still is, to translate the joy of moving around into a videogame set in three dimensions. Maybe that’s why the platforming renaissance has mostly taken place on a 2D plane.

When reviewing Super Mario 3D Land for this site, Jon Irwin suggested that maybe “nostalgia is loving something for making you feel the way you felt a long time ago, and thought you never would again.” Sadly, Ghostly Adventures doesn’t make me feel any of that. Forget Pac-Man’s traditional difficulty, or, even its existential dread… on its own, the game didn’t really make me feel anything. After scarfing down bucket loads of fruit and hamburgers, that’s easily the biggest disappointment. Turns out they were just empty calories.