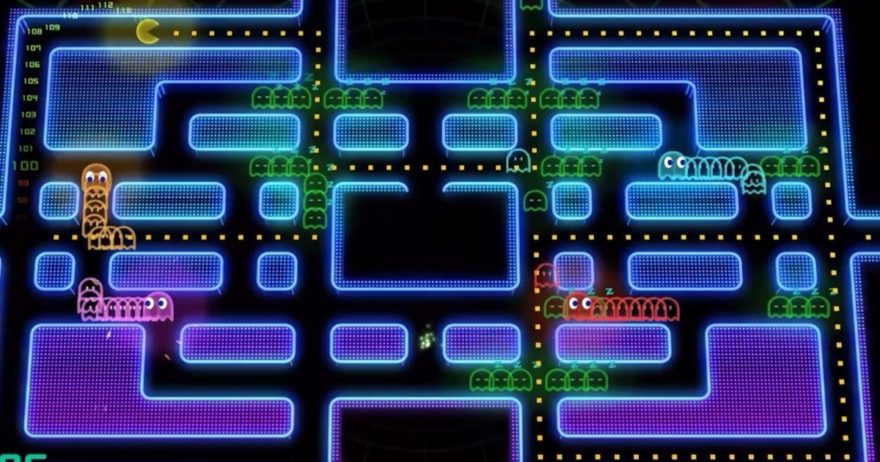 Things have been looking up for Pac-Man lately. Pac-Man 256 made a huge splash on phones last year, and the gluttonous pie chart recently showed up in several collaborations with Google, including map mods and playable Doodles. There was that dreadful Adam Sandler movie too, which, quality aside, did effectively remind the general public that Pac-Man still exists and still really enjoys eating things.

motivated more by the need to reinvent than improve

This modern-day Pac-Man resurgence was spurred on by its original creator, Toru Iwatani, back in 2007 with the release of Pac-Man Championship Edition (Iwatani’s final game before his retirement). Pac-Man CE took the fundamental elements of the original 1980 Pac-Man—mazes, ghosts, power pellets—and remixed them into a high-score challenge contained within tight, five minute chunks. The CE formula was further remixed into the blissful chaos of Pac-Man CE DX (2010) with its ghosts trains and neon-bathed EDM trappings. CE DX was a high watermark for Pac-Man and set an example of how to effectively retool an old arcade game for a new age. It succeeded where so many classic coin-op hits faltered. Bomberman: Act Zero (2006), anyone?

Suffice to say, the new sequel, Pac-Man Championship Edition 2, has a lot to live up to. Unfortunately, in remixing the remix of a remix, Namco’s latest spin feels obligatory, as if motivated more by the need to reinvent than improve. CE 2 might be an original take on Pac-Man, but it’s one that seems to fundamentally misunderstand what makes a remix effective.

One of the most successful elements of Pac-Man CE and CE DX is the way those games perpetuate constant action, reworking halves of the playfield mazes in real time, keeping you on the move constantly. In contrast, CE 2 operates in fits and starts. The game does away with the on-the-fly maze reworks, instead stopping everything to vault Pac-Man onto totally fresh boards. Eating chains of ghosts is automatic now, meaning that when you devour the head of a lineup, the camera zooms in, cropping out parts of the maze you’d otherwise keep an eye on, leaving you twiddling your thumbsticks until the final ghost is eaten and you regain control. And, not only does using bomb items launch all ghosts back to their starter tank like before, they also shoot Pac-Man back to his initial position in the center of the maze. Both the ghost and Pac-Man resets have their uses, but in inextricable combination one of those actions is always either unnecessary or counter-intuitive. For example, if you’re close to finishing off a string of Pac-dots in a far corner of the maze but find yourself pinned between ghosts, you can bomb it all to hell and expel the ghosts, but you’ll be expelled from your immediate objective as well.

Some enthusiastic fans of Pac-Man CE DX have labeled the game “Pan-Man on drugs.” Comparatively, CE 2 is a placebo. Even aesthetically, the game is a shell of its predecessors: the ineffectual “minion” ghosts are green outlines of ghost shapes—ghosts of ghosts. The major twist in CE 2 is that Pac-Man can safely bounce off a ghost three times before they get angry and begin their pursuit. This new-school leniency is a concession to having a glut of unavoidable minion ghost lines clogging up the maze, and in practice turns a game of precision and timing into a bumper car free-for-all. You almost never have to avoid, much less run away, from the ghosts, which renders them nothing but automated consumption fodder.

Pac-Man CE 2’s new Adventure mode underwhelms on its premise as well. It offers a series of timed challenges featuring the same basic loop as the rest of the game, just in smaller doses. The “boss fights” against giant ghosts are all façade, merely serving up a non-interactive cutscene at the end of a series of mazes. While Pac-Man CE 2 is, much like the rest of the CE series, more linearly structured than classic Pac-Man, it’s the first time in a CE installment where I felt like a cognitively-adept lab rat while playing it. You’re given a line of Pac-dots and rarely a reason to deviate from the path.

I find that, in music, the best remixes are the ones that either build up simple tracks or strip down complex ones. The creators of Pac-Man CE 2 had the difficult task of remixing a game that has already been expanded upon and reworked to the point of refinement, and they chose to pile on the complexity anyway. The result is a Frankenstein’s Pac-Man—a mess of features and modes that, despite all the power pellets and fruit and ghosts, still left me feeling hungry.