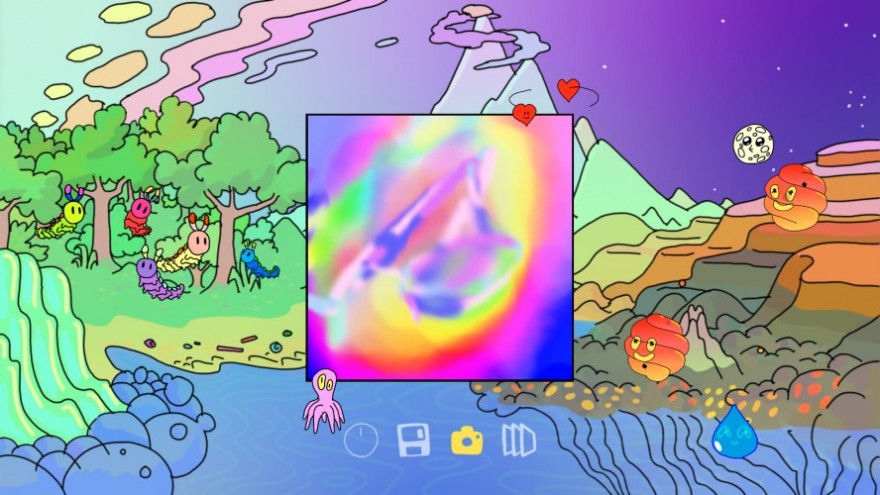 Even with the advent of adult coloring, it’s difficult to find an outlet that makes you feel like you’re creating unique art without actually having the talent to do so. Paint Bug, made in 72 hours for the Ludum Dare game jam, attempts to do just that.

Paint Bug gives the player control over a series of sticker-like characters that they can draw across a canvas. Each sticker, from the water droplet to the moon, has a different effect on the canvas. Players then have the opportunity to save their works as the final piece or as a timelapse series that shows all of the frames of the creation.

Paloma Dawkins, one of the artists involved with the game, said that the team originally wanted to create a kids game but that “our friend Henk had been doing work with brushes so we kinda veered into a drawing app.” What they ended up with was something between the childlike joy of Kid Pix (1989) and the procedurally generated art of Strangethink’s Joy Exhibition and Michael Brough and Andi McClure’s BECOME A GREAT ARTIST IN JUST 10 SECONDS (2013).

“You can jump in and just start making art”

One of the greatest strengths in Paint Bug is that the game just lets you create cool art immediately. “We wanted to let you quickly make something unique. I think that’s what works best. You can jump in and just start making art, and then when you’ve created something you like you can save it and share with your friends,” Dawkins writes. With a variety of tools that warp, distort and color the canvas it’s hard not to create something that is visually engaging.

More additions are incoming to the application, including more brush creatures and having the background have a greater effect on the brushes that are available. If you’re interested in playing around with Paint Bug, you can download it off of the game’s itch.io page.