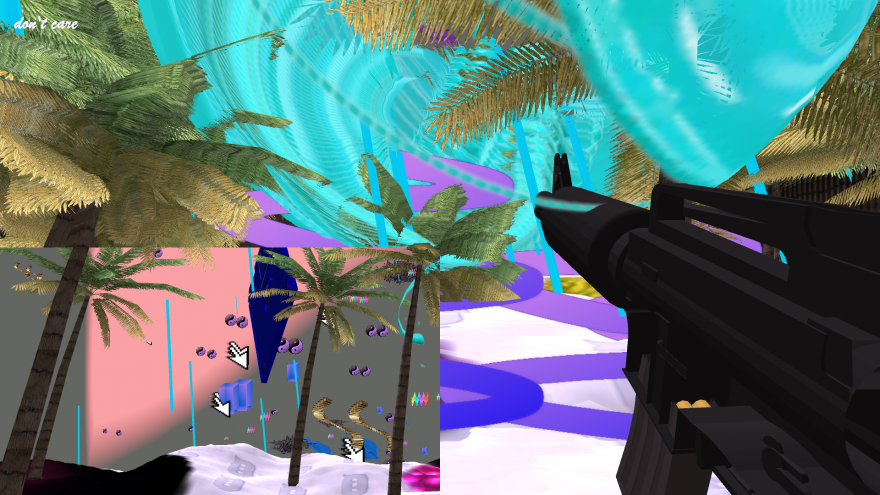 If chaos had a taste then Cassie McQuater could recommend you a spice to go with it. She calls herself a net artist but a more fitting title might be “Mistress of Pandemonium” or “Mayhem’s Little Sister.” Head inside her latest videogame End of Light #8 and you’ll see why.

It’s a tumultuous virtual world with 3D models of dolphins and a smattering of computer icons orbiting the skies, clipping through anything and everything. It’s also a collaboration with musician Jono Mi Lo, who contributes music from his album End of Light, while McQuater gives us the tools to paint tapestries of glitches along to the melodies. You can really make a mess simply by moving around this corrupted paradise while toggling between the two “glitched views” you’re granted. There’s so much shit happening in there, in fact, that a panoramic view was enough to slow down my computer, and I’m not running cheap hardware over here.

drowning under all the inescapable pressures of online existence.

This isn’t all too surprising considering McQuater’s oeuvre. She’s warped the virtual landscapes of Google Earth, caused chat bots to miscalculate procedures, and practically broke the Unity game engine and piped out the remains for us to pick through in NO FUN HOUSE. But this latest of hers seems to be a new extreme born of her penchant for supposedly incorrect creative techniques and the aesthetic of the amateur computer user.

She’s pushed the limits of disarray and on the other side is something unspoken and glorious. But there’s an odd familiarity to be found inside this bedlam. It’s as if a cross-section of someone’s fraying memories. Someone whose life, perhaps like our own, is a series of non-stop online notifications and a perpetual confusion between the real and the virtual. Maybe the reason we start underwater in this videogame world is to imply that we’re drowning under all the inescapable pressures of online existence. And it’s not just one volume of water we have to climb through but three whole layers of virtual ocean have to be transcended before we break the surface.

The bottom layer contains a lumpy seabed made of stretched barcodes. The middle layer is where the furniture of lost vacations and domestic spaces lay scattered: deck chairs painted as rainbows with the words “i feel” along their planks, and open windows with the curtains blown into submission by a strong summer breeze. But the top layer is where the truly beautiful fracas is to be found. It’s from here that you can see the sky box and all of the textureless orbs, bloated squid spheres, and exotic curls of color thrashing around you in large, fast circles.

When reaching the top and seeing all of this incomprehensible noise and color I was honestly gobsmacked. But it soon turned to a strange and unexpected comfort. As my workplace is the internet—a place of constantly incoming mail, public tweets, and private messages—I found an affinity with being complete still at the middle of all the chaos. It was actually relaxing. I’d compare it to sitting on the edge of a beach and watching as the tide creeps in, the water slowly engulfing you while you remain unmoved and uncaring. It’s like becoming the calm at the eye of the storm.

There’s an immense satisfaction, I found, in that utter motionless as everything ebbs and flows around you on its own accord. I guess it comes from having to do so much pushing to put things in action usually, as do most of us in our work—keeping things ticking, a constant maintenance—that when activity happens around me without my input, it feels like a mini-vacation.

But there’s more to End of Light #8 that its initial island. It is actually a floating archipelago, each of the squares of land staggered as a helter skelter. To see it all, including gardens of floppy disks and emoticon rainfall you need only to follow those classic icons that guide us around computer space: mouse pointers and hand gestures.

You can download End of Light #8 for free on itch.io. Jono Mi Lo’s album End of Light can be found on Bandcamp.