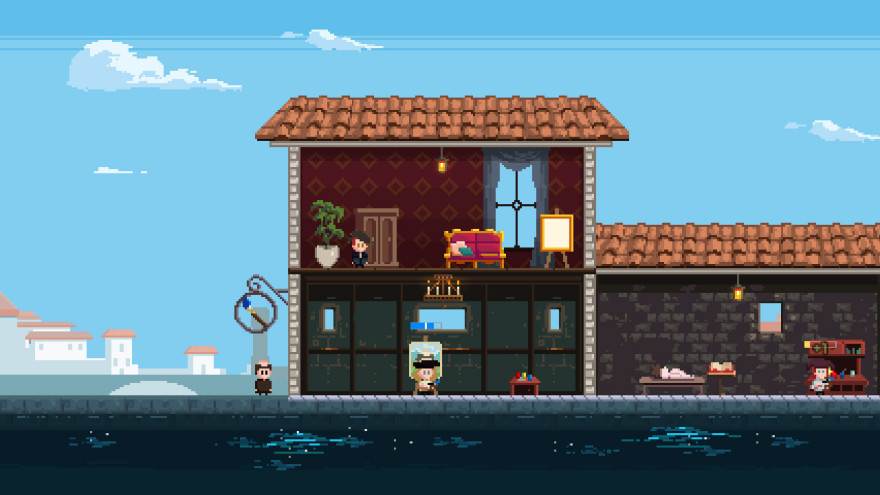 Even people who don’t give a shit about art are aware of the masterpieces of the Italian Renaissance. If you think you’re an exception then let me destroy that notion for you. Heard of the Mona Lisa? Statue of David? How about The Creation of Adam? If you have (and, yes, you definitely have) then you are one of us.

But what of it? We all know about these pieces of art, but many people probably don’t know why they’re so famed, nor do they care that much to find out either. For the majority of people, the stories and legacy of these paintings and sculptures is the concern of someone else. And it’s in this widespread attitude that Lucas Molina finds a vocation. He is both a videogame creator and history teacher. And so, naturally, he has combined the two for his latest project, which he calls Painters Guild.

my Da Vinci got into a bar brawl

He did this because, while he is a teacher, Molina is also an introvert. “I enjoy planning classes and finding ways to explain history to people more than I enjoy speaking to them,” he explained. And so, by making Painters Guild, Molina was able to, as he put it, focus on the planning without having to worry about the people. “I really want to teach history,” Molina added, “and games are an efficient way to reach the world—maybe more so than classes.”

At its most basic, the idea in Painters Guild is to manage an artist’s guild in 15th century Italy. You have to recruit apprentices, deliver paintings for your patrons on time, expand your guild’s building spatially and decoratively, and can even train masters such as Leonardo Da Vinci. But what may be surprising to the uninitiated is that, despite being about art, Painters Guild doesn’t teach you much about the craft itself. Instead, it is concerned almost entirely with the business behind it all.

As you’ll discover immediately upon playing, Molina uses the lens of a management game as a veil for his subtle history lesson. As you focus on filling up progress bars, you’re interjected every now and then by a messenger who arrives at a historically appropriate time to tell you of significant events in and around Florence, Venice, and Rome. Popes die, cities are burned down, and various art trends rise and fade as you progress rapidly through the years.

“I did a lot of historical research, from classics such as Vasari’s Vite and Burckhardt’s Civilization of the Renaissance to more recent research,” Molina said. “I tried to put historical metaphors behind every mechanic of the game, and behind the aesthetics, while Morvan made sure to base the whole soundtrack in history as well.” Importantly, Molina adds that Painters Guild is not “strictly” historically accurate. It’s an important note to make as, at one point, my Da Vinci got into a bar brawl and I had to bail him out of trouble (costing me 200 Florins), which isn’t something that actually happened to my knowledge.

Likewise, greats of the art world that you oversee can get sick, and even if you hire a doctor to fix them up, may die from the illness. While it may seem unfair, the reason for the doctor’s failure is obvious, at least, as soon as you take a moment to let the frustration subside. Medicinal practices were nowhere near as effective then as they are for us these days. Sometimes people were ill and couldn’t be cured. Painters Guild doesn’t tell you this directly but you pick up on it as you play inside its recreated world. Another history lesson lies in the character creation screen at the start of the game. You can choose to make your character homosexual but you are warned upon making this decision that being homosexual in 15th century Italy is punishable by death. This hasn’t affected any of my characters yet but the suggestion is that you’re giving the randomized events system another way of killing off your character—it’s a decision that comes with a risk, but to be true to nature should probably be assigned a character at random rather than being presented as a choice.

What Painters Guild is, then, is a play with history. It’s a very limited sandbox that is strictly informed by possible historical scenarios. “It tries to use the concept of verisimilitude: your game experience could have happened,” reasons Molina. It’s a game that teaches you about the surrounding conditions and politics that informed those painting masterpieces. Some of the ramifications of privilege that the game teaches even have some weight today. For example, in my game, Da Vinci never became the famous painter we know him to be, as I couldn’t afford to pay for him to go through the necessary procedures towards that status. He never painted the Mona Lisa, instead, he died a poor man with only mediocre art to his name and was forgotten by the end of the century.

You can purchase Painters Guild on Steam. Find out more on its website.