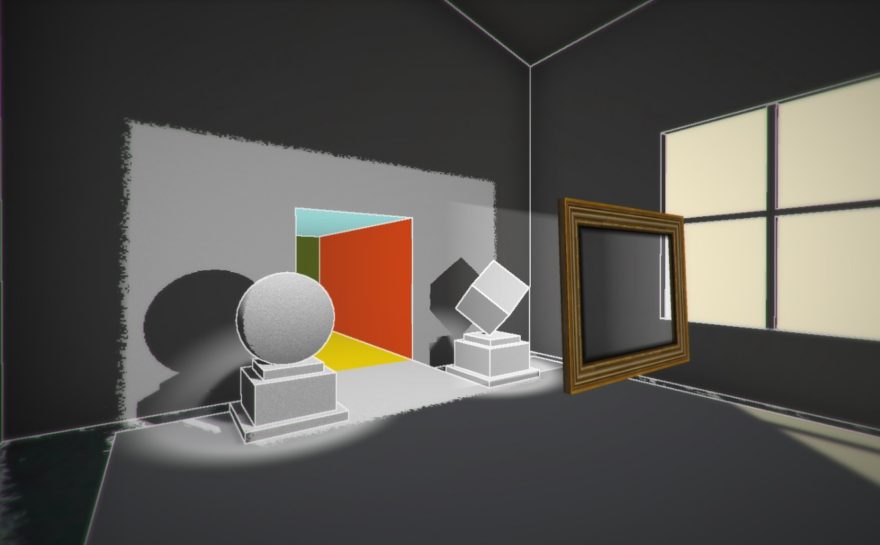 The years after Portal came out in 2007 were tiring. An influx of first-person puzzle games broke like a tidal wave over the horizon. All of them flaunting what their creators deemed to be the next big “mind-bending” idea. They simply hoped to wow people. But many of these games were were dull, uninspired rehashes. The genre was quickly saturated to the point that it became unbearable.

I’m hit with surprise, then, that upon seeing FRESCO, an upcoming first-person puzzle game, I haven’t held my hands to my face and screamed until my throat was hoarse. Maybe the fallout of 2007 has finally worn away.

holding up paintings to your face to change the environment

Being made by sole French programmer Yannick Gerometta, FRESCO is all about holding up paintings to your face to change the environment—sounds mad but it’s true. Each painting corresponds to a particular view inside the game’s world; objects will match up perfectly and light up green when you find the right spot. But the paintings bear a slight difference to the places they depict: perhaps a doorway, a hole in the wall, or a staircase. And so, once it’s aligned, you can press a button to introduce that new element in the painting to the world around it.

I know, I know, trying to explain how these things work is second to actually seeing it in action. So, here you go, watch this video:

You’ll notice that in the second half of the trailer the paintings seem to become electronic. They have a timeline that can be fast-forwarded and rewound, changing the state of objects the view is pointed out according to where they were at a certain point in time. Presumably, these aren’t hi-tech paintings but some kind of recording device. Gerometta can justify their inclusion in the game as he wishes later on, I suppose; for now these are early explorations of how to expand upon the game’s initial idea. So, yeah, I guess this thing has some legs.

That said, for FRESCO to hold my attention it’s going to have to do a bit more than be “mind-bending,” as Gerometta claims, and that I find to not be the case. It’s the game’s potential to entwine with the art world through its paintings, and with those recording devices perhaps also to the era of VHS technology, that I find my interest in it. If it took those potential themes and ran with them and was smart in how it interacted with these cultural artifacts then I’d be very down to play FRESCO.

Hopefully Gerometta can put that kind of flesh on the game’s bones once he’s worked out its mechanical structure. For if it doesn’t then, unfortunately, it’s likely going to be yet another one of those post-2007 flops. But let’s stay optimistic, maybe we have another Antichamber or Perspective or Museum of Simulation Technology on our hands. Let’s hope.