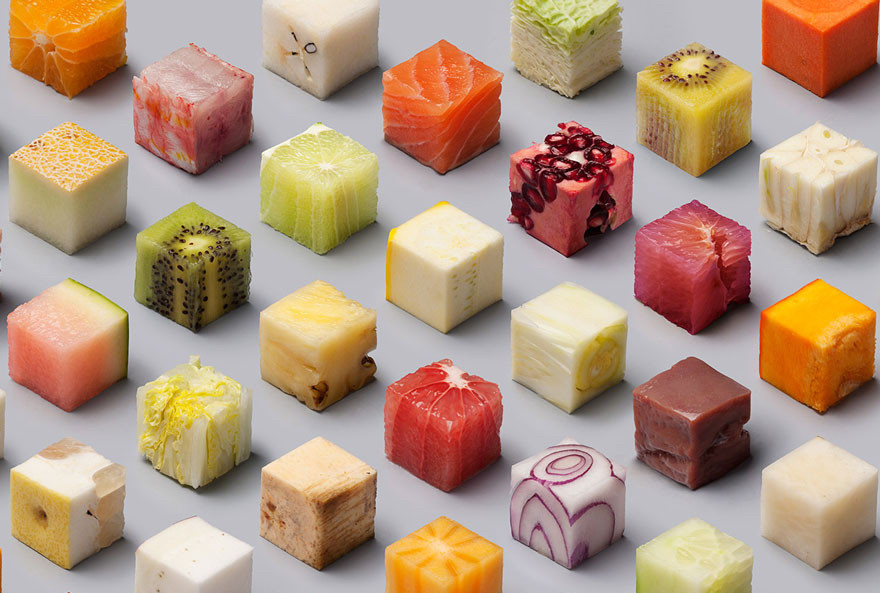 The artists responded to a commission for a food spread in de Volkskrant by cutting 98 pieces of food into 2.5cm cubes. Though these cubes are precisely cut, they have little to do with traditional culinary knifework. Lenert and Sander have not produced an oversized brunoise of Wagyu beef, purple potato, and endive. Rather, the pair has turned foodstuffs into a sort of geometric artwork wherein each of the cubes reveals a different pattern of striations.

The bites in “Cubes” can be considered 8-bit food.

The bites in “Cubes” can be considered 8-bit food. As with 8-bit cinema remakes, they turn figurative building blocks into literal ones, breaking down the artist’s palette into a series of small bricks. These pieces can be reassembled, but only in a way in which their intrinsic cubism remains apparent.

On Monday, Nation’s Restaurant News’ Jonathan Maze argued that 3D printers are positioned to become the next go-to tool for chefs. These printers allow for the creation of previously unrealizable edible shapes. These fanciful shapes may not, however, be the most extreme forms of culinary invention. “Cube” suggests that the creation of perfect shapes out of natural ingredients is even more unnatural. We’re not used to seeing our food as 8-bit art, but here it is.