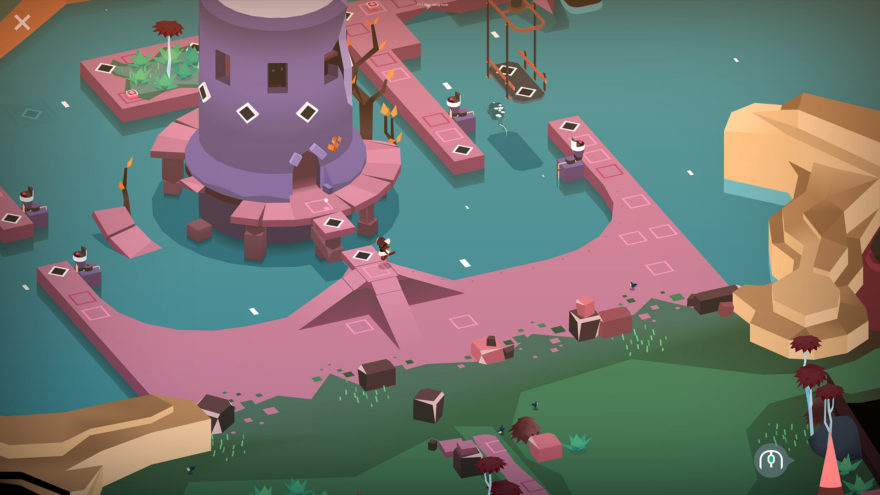 You’re riding aboard your spaceship—maybe you’re enjoying an in-flight movie, and everything is going reasonably well. Then it isn’t. That wasn’t supposed to happen. But it did, and you’ve crashed on a remote planet. Good luck with that. Now your job is to get home. Or is it?

That is the central tension in Pan Pan, an upcoming game for PC and Mac from Spelkraft, to be published by Shelter (2013) creator Might and Delight.

On the one hand, it is quite clearly a game about returning from the planet on which you’ve crashed. (Think 2015’s The Martian, but with the aesthetics of 2014’s Monument Valley) The gameplay—a series of puzzles, really—is designed to get you to that end. But damn, isn’t the planet nice. As you move about, a gentle soundtrack by Simon Viklund flickers in the background. It’s a big upgrade on Waze. It directs you to your destination, but really doesn’t tempt you to get there. What’s the rush?

Maybe you want to get back to your ship because it looks like an ice cream cone. That is a reason, albeit not the greatest of them. Everything looks reasonably delectable in the Pan Pan trailer and one wouldn’t bet against there being a gelato-shaped hut around every corner. Maybe space is hospitable to life after all.

To an extent, all games are about the journey as opposed to the destination. When you get there, it’s over. On to the next one. In Pan Pan, this structural dilemma takes on narrative form. Atmospheric gaming, in the able hands of Spelkraft, becomes another way of saying there’s no rush, take in the scenery, enjoy the music. There are puzzles to solve and places to go and you can get to that eventually. Or not. It doesn’t really matter. You aren’t lost; you’re where you want to be.

Find out more about Pan Pan on its Steam store page. It’s due out for PC on August 25th.