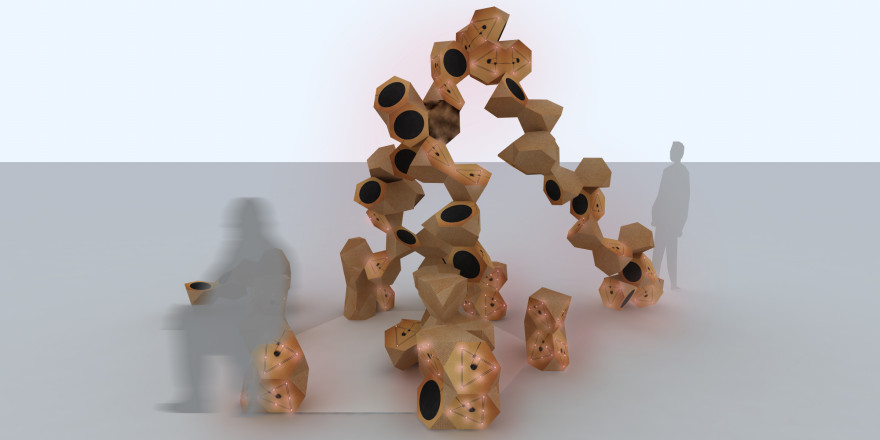 If you thought musical chairs was hard enough when you were seated in a circle, Paper Playscapes, an open-ended installation representing a landscape in movement, has a challenge for you. Announced yesterday as the winner of a commission for the Elephant & Castle Mini Maker Faire, Paper Playscapes embeds paper electronics to create a cell-by-cell structure of six “pillars” that viewers will be able to interact with.

The creators Artemis Papageorgiou and Gabriella Mastrangelo met while working at London’s Cinimod Studio.  Artemis has co-founded Athens Plaython, a festival introducing play in the streets of Athens and the design lab Entropika.  One of her previous projects Wii/nd Chime turned Nintendo Wii controllers into … wind chimes, which sounds quite pleasant. Gabriella has co-founded Make People Do Lab, producing and teaching workshops on design, craft and paper architectures with geometry and soft materials.

Paper Playscapes pulls heavy inspiration from the Op Art and Arte Concreta movements of the 60s and 70s, specifically, Bruno Munari’s scultpture game Aconà Biconbì, which influenced Playscapes form. The final shape of the installation is still in flux before its debut in November, but the gameplay appears simple enough. Two teams of three will compete for the final coveted seat while six different rounds will be triggered dynamically. Sounds like a lot of fun and hopefully it won’t tear too many families apart.