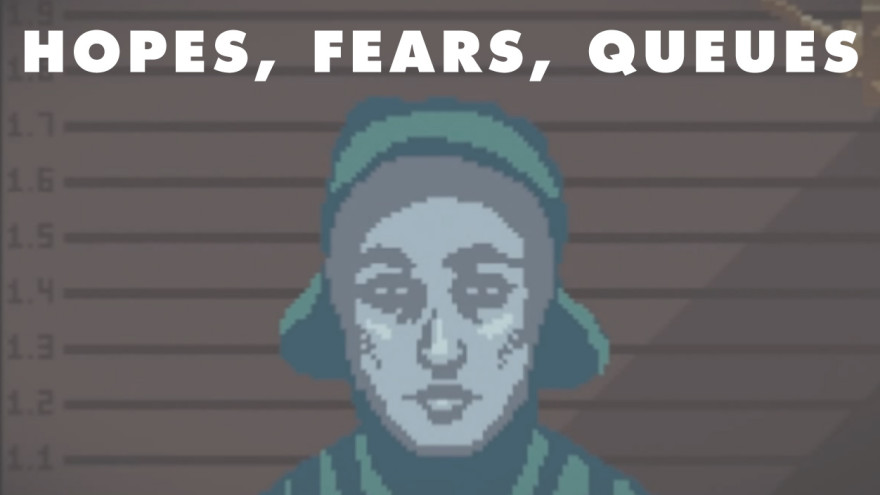 “For every [undocumented youth] who’s a valedictorian, there’s another 100 out there that weigh 130 pounds and they’ve got calves the size of cantaloupes because they’re hauling 75 pounds of marijuana across the desert.”

Borders have complex histories, but they also prevent us from seeing the histories of the people from the other side. It’s easy for things to become about them against us. King’s quote says more than he means. Not the hatefulness, but the subtext: On the other side of a border is either our hopes or our fears. Note that the people King is talking about, the mass of undocumented children who were brought here with their parents, are called dreamers.

On the other side of a border is either our hopes or our fears.

In Lucas Pope’s Papers, Please there is a border, and it manages to grind the soul from people. You play as an immigration officer in a monotone dystopia. People line up, present their paperwork, and then you, with all the powers vested in a rubber stamp, can welcome them into the country, turn them away, or worse.

Over time, you are trained and shaped into a checkpoint Sherlock.

Over time, you are trained and shaped into a checkpoint Sherlock. Each person walks up to the gate and presents their paperwork. With the documents presented, you click on discrepancies and interrogate the person. Sometimes it’s as simple as a lapsed expiry date, or restrictions disallowing people from certain countries. Sometimes it’s a more purposeful lie. Why is somebody presenting you with a forgery? You are not often given a concrete answer, nor are you given a chance to care. Grab the giant red stamp and send them back home.


There’s a bit of guilt in how good it feels to be a cog in this system. There is that pleasure in having solved a riddle, of having sussed out somebody’s ruse. It helps that spotting an inconsistency or error moves the line, because speed is key. The more people moved along, the more money earned at the end of the day. An honest person requires a level of scrutiny that can be overwhelming and there’s always the feeling that something has been missed. Both attention and alertness become resources that are constantly tested. Each day in the game adds a new wrinkle, either a new tool to root out lies or a new document to pore over. By the end of the game there are dozens of little pieces of information that need to be juggled. The greatest trick the game pulls is making the player gradually accustomed to the oppressive regime and understand why its rules, no matter how wrongheaded, exist. An early-game suicide bomber turns into invasive body scanners.

Oppression is subtle and everywhere. Even the play-space itself feels claustrophobic.

Oppression is subtle and everywhere. Even the play-space itself feels claustrophobic. The top half of the screen shows a black and gray aerial view of the border crossing; on the bottom left is a little window in which an ugly, almost grotesque caricature of the person you’re dealing with stands; and to the right of that is a desk that is far too small to hold every piece of information you need. So you drag the papers onto and off of the desk, the physicality of all this shuffling only fraying your attention further. Sometimes you have to drag out the rule book to point out a breach of protocol and the desk becomes cluttered, pages overlapping and obscuring vital facts.

In these documents–these work permits or asylum statuses–is a little story, a hint of the life the person is leading. But the game is designed to dehumanize. The line needs to move along. People stop being people and start being a problem to be solved. The sparse writing tries to occasionally remind the player that it isn’t supposed to be this way. When a man comes without the proper documents he curses the ever-changing requirements. When your character notes that it makes his life easier as an immigration officer, the man is incensed. Why should he care about your job? You deal with citizens, immigrants, refugees and migrant workers. Only very rarely are you confronted with people. 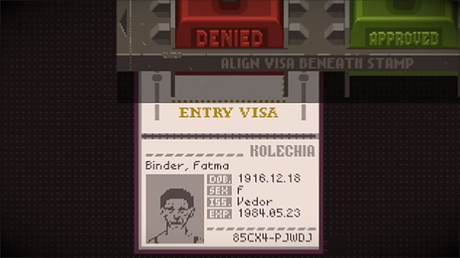 The game is at its best when it focuses on this humanity, and at its worst when it forgets it. At the end of each day, you designate where your earnings go: heat, food, medicine, housing. Slipping up too many times means losing some pay, and losing pay can mean losing heat and losing heat can mean one of your children catching a cold, so you keep churning people through the line because that adds up to medicine. But the family for whom I’m sacrificing my humanity is just a wall of text. They’re not humans but metrics to keep satiated. In an early run of the game, I had, through mismanagement, gotten most of the protagonist’s family killed, but the game soldiered on regardless.

Papers, Please works best when it focuses on the personal.

Papers, Please works best when it focuses on the personal. Your boss wants to bend the rules. Do you let him? A guard who patrols the outside parameter has a sweetheart without papers. Do you let her pass? How shaded in does the story have to be before it’s worth paying attention to? But that’s the problem: as with the cluttered desk, there is only so much attention and compassion to go around.