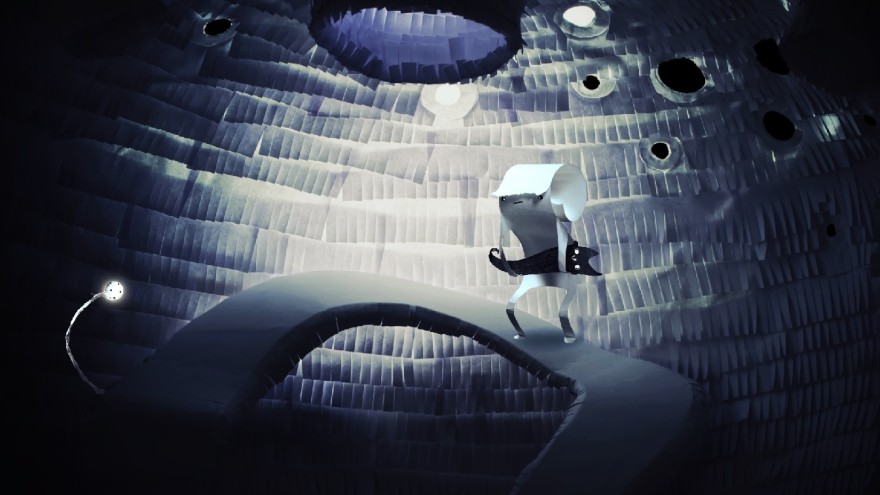 Papetura sure is made out of paper. In the game’s opening shot alone there are sheets of it: curled into pulsing fingers like ocean waves or quilted grass, twee spiraling silhouettes proffering the shape of local flora. Devoid of every color but white, and with only these paper shapes suggesting the environment, it’s difficult to say exactly where Pape and Tura have awoken.

Only one thing is for sure, and that is they’re not comfortable there, given that they’re both sporting frowns. Pape wears a trim paper fringe and a rear-turning swirl for a haircut; all made from paper, of course. Tura is a tadpole of a cat, all front paws and pointed ears, back legs and tail merged into one like a ghost.

As the pair arrange themselves, Pape plunging Tura upside-down into the ground for convenience’s sake, everything goes even more awry. The very ground they stand on betrays them; it was a giant fish head all along, and now it rears itself up from underneath, flipping them both into the air before swallowing them whole.

The rest of the short demo (download here) is surrounded by a shell of paper frills. It’s the inside of this fish, and you need to point-and-click in a way that’ll get Pape and Tura out of there. Once you do, you may wish you hadn’t, as it means the twinkling percussion of Floex stops. So, too, does your visit inside this delicate fantasy world.

Unfortunately, there isn’t a way to immediately get access to the rest of Papetura right now as it still needs to be built. In fact, the small Polish team behind it are currently seeking funding on Indiegogo in order to paper the rest of the game. While the funding is a nuisance, as always, it’s also highly necessary for a project being constructed like this. As you can probably imagine, modelling paper into believable environs takes many hours and a lot of resources—there’s a short Making Of video that offers insight on this.

And, according to its creative team, that’s not even half of the work, as “the biggest challenge is to make paper model[s] and light work as a whole.” Papetura is a combination of at least three disciplines: paper animation, photography, and coding. The short demo, which takes about 10 minutes to complete (three minutes if you know what you’re doing), took about four months to make from start to finish. That’s a frightening conversion rate. Sure, the team made a lot of mistakes along the way that they’ve now learned from and which will help to speed up future production, but it’s a timely undertaking either way.

as Amanita Design as it gets.

The result of all the meticulous work is evidence enough that it’s all worth the effort. And I don’t mean only in how the world is tangible, or that its production is unusual enough in videogames as to be the entirety of the appeal. No, the team demonstrates an understanding of what to do with animation in order to capture the full potential of its unique character.

The biggest complement I can give is to say that Papetura has all the hallmarks of Amanita Design’s work. Not only does it share a composer in Floex (the musician on Botanicula), it also has the childlike humor, the fluid performances, and a similar fascination with microbiology.

Finding a small world inside a fish with odd creatures residing there, as you do in Papetura‘s demo, is as Amanita Design as it gets. It’s using the flexibility and imagination that animation allows to create worlds that are as huge as they are tiny, and all out of a material so common to us that it’s mundane.

Celebrated Czech animator Jan Švankmajer said that it’s through animation that magic enters the ordinary, invading our daily lives, and making us question what’s around us. Animation is the language of fantasy and imagination. It’s this enchanting tongue that Papetura‘s team speak in fluently, gifting a rare delight in the medium through their work.

You can support Papetura on Indiegogo. More information is available on its website.