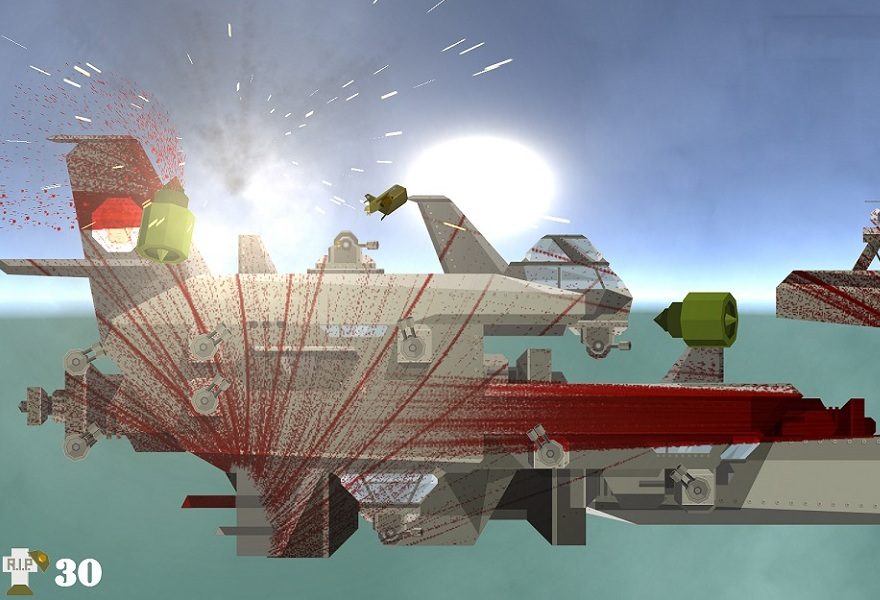 The game jam A Game By Its Cover 2016 is over, leaving behind many interesting and wonderful games. Inspired by fake Famicom game cover art, some of the games got weird, and that’s certainly the case for Parachute Pete. The game is immature in the best way, bringing together the terrifying majesty of a massive military aircraft and the brutality of chopping up bodies with giant engines.

In Parachute Pete you control a tiny, weaponless green plane, with the goal of destroying aircraft (bearing a suspiciously familiar face on the tail) that are roughly 500 times larger than yourself. How do you do this without weapons, you may wonder. With people, of course. No, not by dropping soldiers who board the plane and destroy it from within. By dropping paratroopers who gently drift down with their parachutes, and then, if timed correctly, are violently sucked into the engines and chopped to bits, spraying the plane with their blood. You need to get enough of these poor guys into an engine for their bodies to clog it up and cause an explosion.

immature in the best way

Of course, the aircraft you are trying to destroy are armed to the teeth, so timing is key, lest you be blown up by their barrage of rockets. Over the course of the short game the rockets get faster and more frequent, so you’ll have to put your little vessel in increasing peril to drop your paratroopers into the engines. But even if you succumb to their many missiles, you’ll only have to go back to the beginning of the level, where you’ll be greeted again by a tongue-in-cheek, Duke Nukem-esque voice pumping you up for the next round of human sacrifice and destruction.

Parachute Pete pulls from a sense of nostalgia for the violent web games young teens played in the early to mid 2000s. Parents shook their heads at their kids shooting virtual humans, but there remained a wide space for kooky slapstick violence. From throwing your skateboarder down a set of stairs, to launching kittens from cannons, blood splatter reigned supreme. Parachute Pete continues in that grand tradition, painting the world a cartoonish red, one sad dead paratrooper at a time.