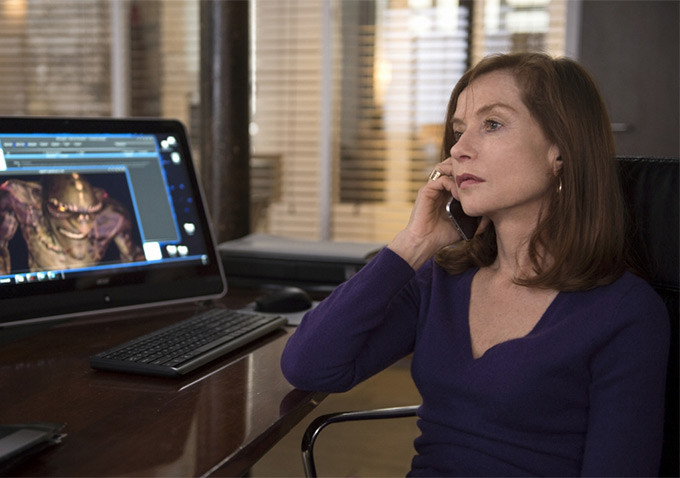 Warning: the content of the video included is NSFW and contains references to sexual violence.

At the start of Paul Verhoeven’s latest film Elle, a woman is violently raped. The rest of the story is about how that woman, a French videogame executive played by Isabelle Huppert, deals with her relationship with the rape and the rapist himself.

If the Verhoeven films you’re most familiar with are RoboCop (1987) and Starship Troopers (1997), Elle will surprise you. It’s perhaps a better fit in the realm of Verhoeven’s psycho-sexual thriller Basic Instinct (1992). That it is not immediately what it seems—a drama about a woman coming to terms with her own attack (a la Jodie Foster’s 2007 The Brave One)—but rather takes the concept and skews it attests to that. IndieWire, who saw the movie premiere at Cannes, called it a “lighthearted rape-revenge story.” This is not all too surprising: Verhoeven is best known for taking concepts in a provocative direction. B-movie level science fiction schlock turned into a commentary of fascist governments and propaganda? Check. A rape revenge dark comedy? Check.

Verhoeven is best known for taking concepts in a provocative direction.

There’s a long history of rape-revenge films and their questionably feminist legacy. “Many viewers/critics see the rape revenge film as only a small step above the slasher film, a sub-genre devoted to the humiliation of women but is nevertheless hidden behind the somewhat transparent banner of feminism,” Kier-La Janisse of Cinema Sewer writes. It’s easy to hate a rapist so it’s common shorthand for making you hate an antagonist, as well as allowing for titillation which is the meat and potatoes of schlock. It seems a very Verhoeven thing to do; to take a sub-genre defined by both its abuse and empowerment of women, and to attempt to reinvent it for the modern era.

With the threats of sexual assault that have perforated the videogame community, a film like Elle has the potential to run into a “ripped from the headlines” Law and Order: SVU vibe. The protagonist runs a videogame studio, she stands over a meeting wherein a violent rape is played out in pixels on screen. But she isn’t any of the women whose lives have been afflicted by the promises of sexual violence.

She’s not even like the women in the rape-revenge films that filled grindhouse theaters in the ’70s—though a former lover intones “the real danger, Michele, is you”—and she’s intentionally crafted to be difficult to pin down. Huppert, the star, says that the movie shouldn’t be seen as realistic, that instead it’s “a particular story about this woman as an individual, not women in general.”

Elle is set for release on November 11.