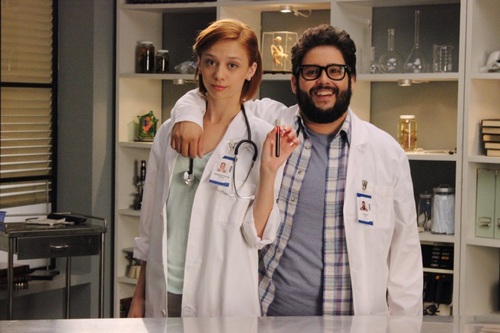 After the success of the 2012-2013 transmedia web-series adaptation of Pride and Prejudice, PBS is back to modernize more of your favorite classics. This time, with Mary Shelley’s Frankenstein. And there’s gender swapping. Oh, is there ever gender swapping.

The Austen adaption The Lizzie Bennet Diaries garnered over a million views on its first episode, and maintained about half that audience throughout the entirety of its 100 episode year-long run. The Guardian called it one of the best adaptations of Austen’s work. The vlog format, though perhaps at first disorienting in conjunction with the Austen-verse, eventually started fitting like a glove. If you think about it, vlogs set a great tone for the personal being aired out in public (no pun intended). Which is something Austen knew a thing or two about.

It remains to be seen wether Frankenstein MD, the latest collaboration between PBS Digital Studios and Pemberley Digital, will prove an equally fitting experiment. The first few 6 minute episodes aired on August 19th and already reveal some intriguing expansions on the themes of its source material.

First and foremost: Victoria Frankenstein is, as you might have guessed, a woman. Her over-ambitiousness in this adaptation stems not only from a natural hunger for knowledge, but also from an apparent need to both prove herself and vindicate her mother’s abandoned work in the medical field. The reasons for why Victoria’s mother never finished her work remain unclear. If they stick to canon, then maternal death will once again motivate Frankenstein’s fascination with reanimating corpses.

But if perhaps childbirth forced Victoria’s mother to put her promising career aside (a theory supported by some patronizing comments from a doctor in episode two), then things might certainly take an interesting turn. A mother/daughter relationship complicated by the life-giving aspects society demanded of them, in the context of Frankenstein’s themes of the hubris of man kind—it’s a tantalizing concept.

But, whoa. I’m getting ahead of myself here. We’re still only four episodes deep.

But Anna Lore’s enthusiastic and likable take on the character usually manages to breeze past these lapses with little harm done. And I’m a little too enamored by her off-handedly dark and sometimes borderline psychopathic disregard for life to even care. This chick will make your heart stop. Using science. And then casually resuscitate you with a defibrillator.

Like The Lizzie Bennet Diaries, Frankenstein MD also experiments with in-character social media storytelling as well. There’s a Tumblr, a Twitter, and even a Facebook with some well-written and quirky commentary adding to the overall charm of the experience.