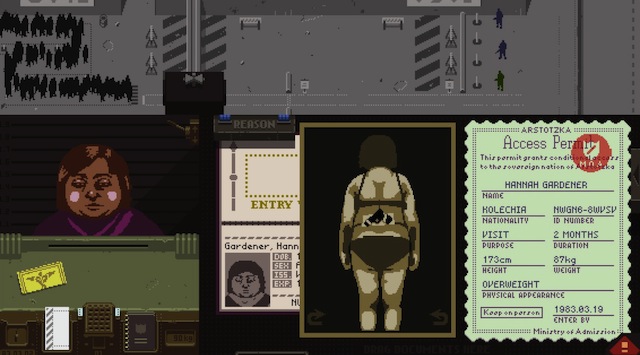 As we’ve seen in Papers, Please, our third favorite game from last year, the job of an Eastern Bloc immigration officer isn’t the easiest. But checking phony papers at the border was even more taxing before its creator Lucas Pope threw out some aspects of the game before release.

Among the trials and tasks that were cut from the final version of the game include baggage inspection, checking document seals with UV light, and the occasional gun fight, we learned in a post by the author on TIGForums last month. Also removed was a little light that let you know when you supervisor was monitoring your station, if your job wasn’t stressful enough already. “People were clicking it like a button,” Pope writes.

While peeks-behind-the-scenes likes these, known as “postmortems” in industry jargon, are typically filled to the brim with technical minutiae about gameplay systems, you get the impression that Pope was just throwing ideas against the wall and seeing what stuck. Although they didn’t make it, most of them sound pretty great. There was even an alternate ending in which the tables were turned on the immigration officer, where you had to present the correct documents or be detained. But that caused problems. “Did I want people to fail at this point, by offering the wrong docs/bribe? How would that be handled?” he writes.