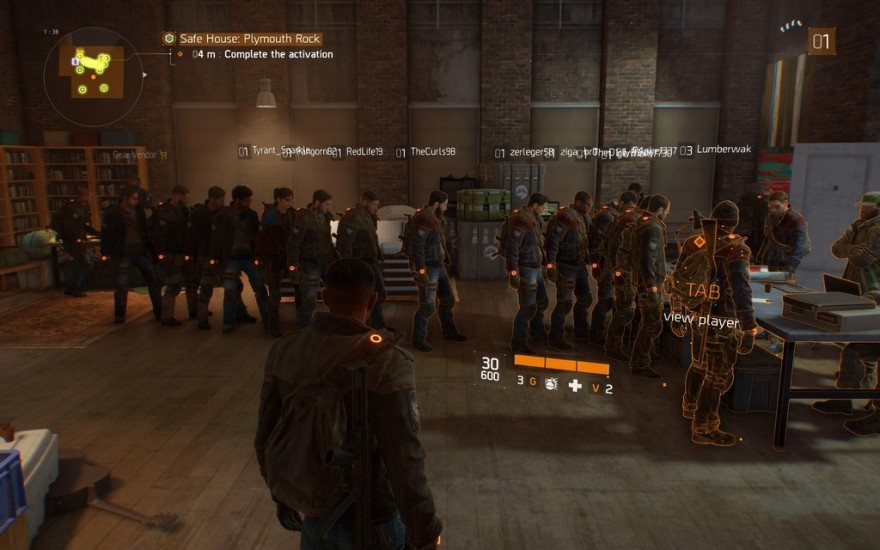 Military-minded author Tom Clancy has his work adapted into games all the time; his blend of nitty-gritty technical detail and completely absurd US-against-the-world plotlines is perfect for shooters of all kinds. However, despite his dedication to apocalyptic terror scenarios, one thing Clancy never anticipated was … the queues.

Luckily, Ubisoft’s Tom Clancy’s The Division was released yesterday, and it has all the white-knuckle waiting action you can stand. Taking place in a disease-ravaged NYC with absolutely zero parallels to 9/11, The Division taps into the same “but what if society fell APART, man?” paranoia of AMC’s The Walking Dead. It’s a license to be the all-American badass who lays into “looters” with a shotgun, keeps a closet nicely stocked with beanies, and … waits in line to exit the starting area.

Yes, like families milling about in some sadistic future theme park, it appears players are queuing up in The Division‘s tutorial area because of an amusing oversight: all characters are rendered as bodies in the game world, meaning you can’t just pass through them to talk to the guy behind the desk or open a crate. You have to wait your turn, because no matter how Kafkaesque things have gotten, this is still America, and I swear to God if we start rushing the NPC behind the desk like animals what does this country even mean anymore? If we don’t line up right now, Manhattan is finished.

“Form a line,” says player FrankCastle80 in the screenshot above, standing up tall—the Rick Grimes of bureaucratic bullshit.

And then there’s this gem:


Now this is all in good fun, of course. I wouldn’t be surprised if all this gets patched out of the game immediately. It’s a little curious, though, that in a game about a hostile, devastated NYC, you have enough trigger-happy “agents” lined up to combat The Chaos strangling the city. It’s like if those pricks that waltzed around Ferguson, MO with assault rifles collided with the aftermath of Hurricane Katrina: sheer apocalypse tourism tapping into a rich vein of xenophobia and fearmongering.

Line up, you brutes, and play nice.