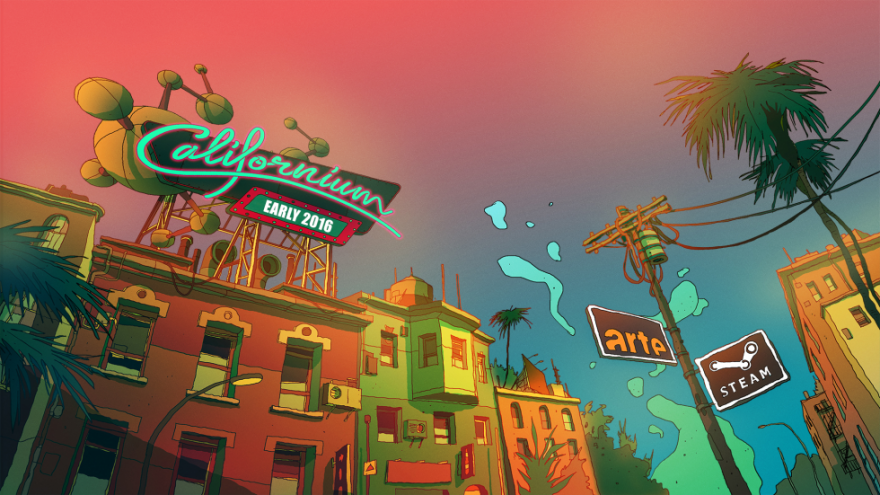 Californium doesn’t have the look of a videogame about Philip K. Dick. We’re used to the somber, rainy cityscapes of Blade Runner when we think of the sci-fi author. Yet it may be the truest adaptation of the man and his work yet—the vibrant wash of summery hues included.

It’s to be a first-person exploration game made as tribute to Philip K. Dick. “You just have to walk around, talk to people, look around, and search for things that are not normal,” explained producer Noam Roubah to Ars Technica. So far so typical for the genre, then. But Californium will also delve into reality shifts. “At some point, maybe, you might see glasses on the table only to have it change into a book,” continued Roubah. “When you find abnormal things like that, you will expose another reality.”

The idea behind Californium originally sprung up four years ago as the 30th anniversary of Dick’s death in 2012 approached. It has since become a transmedia project that’s paired with a documentary called “The Worlds of Philip K. Dick.” Both projects look to explore how Dick’s vision in his own life and his fictions are reflected in contemporary society.

Californium takes mostly from Dick’s 1981 novel VALIS. While that novel is a work of fiction it can almost be read as semi-autobiographical. The narrator, Horselover Fat (a stand-in for Dick himself), believes that there are multiple realities, and that it’s possible to pick up on signals beamed around the planet—realized as visions—that reveal this hidden truth.

Dick kept a record of the phantasmagoric visions that he experienced from 1974 onwards. They are collated in The Exegesis of Philip K. Dick, which also explores how these visions, as well Dick’s thoughts on philosophy, religion, and science informed his fictions. The author also touches on his experiences with schizophrenia and recreational drug use in these journals, supposing this as a rational explanation for these visions, which is a possibility also reflected in VALIS.

“this world is unstable, you can extract yourself from it”

The themes of Californium run parallel with all of this; you play as a writer trapped between realities. More specifically, it’s set in 1967, your name is Elvin Green, and your life is crashing around you. Your wife leaves you and your editor drops you due to lack of writing (a major flaw for a writer, huh?). After taking acid, drinking lots of booze, and avoiding sleep while trying to type up a novel, Green starts getting visions.

“Your brain perceives a signal, the Theta – which seems connected to your collapsing emotional state – shows that there could be a way out : this world is unstable, you can extract yourself from it and thus access another reality! You have nothing to lose!” so goes the game’s description.

Bringing the world to life that you’ll explore in Californium is French illustrator Olivier Bonhomme. Have a look at Bonhomme’s website and you can see the connection between his illustrations and the surreal, bizarre mindfuck of Californium. Bonhomme was chosen for the project as the producers wanted to depart from the usual dreary artwork that Dick’s words are afforded and bring to life parts of him that usually escape adaptation—the occasional silliness and history of chemical experimentation.

“When you read Philip K. Dick, you realise the dystopia is not in the aesthetic, but its portrayal of human beings. His books were very fun and we wanted to keep this aesthetic,” Roubah said to Ars Technica.

The producer also mentioned that he and the team were toying with the idea of bringing a short experience based on Californium to virtual reality. It seems appropriate for a videogame all about the interstices of dimensional reality. I’m sure Dick himself would approve.