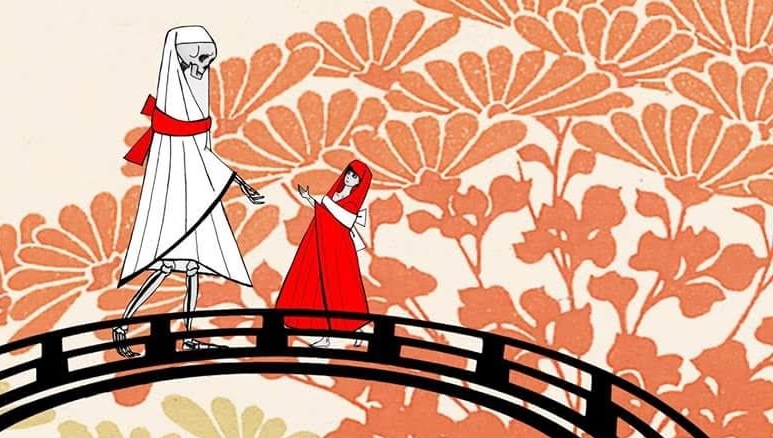 Rocco Salvetti might be not your typical videogame maker. After studying philosophy, he decided he wanted a new adventure in IT. “I had a good job, but curiosity took over. I left and started all over,” he said. He moved from Italy to England, finding in London the right place to settle down and to run away from the stillness of small towns: “I need a massive city not to get depressed and it has been four years now, maybe I should consider Tokyo.”

It is this hunger for more that describes Sara, Salvetti’s alter ego, and the protagonist of his game Sara and Death. Available for free on Google Play and iTunes, this little philosophical puzzle game is a noble move against the tendency in the market for mobile games. “It was made as an antidote to Candy Crush (2012), its poor taste and addictive gameplay. Drugs are addictive, not games”, argues Salvetti. It’s this attitude that encouraged him to make it ad-free too, refusing to monetize it as that kind of move “demands some design choices.” He says he wanted this game to be strictly personal: “You don’t monetize on such gloomy name or colors. My point is: you can do poetry and philosophy with videogames. Cinema did, sculpture too, why not videogames?”

“Death kinda works as a mirror”

A fan of Ingmar Bergman, with Sarah and Death, Salvetti has created a game that was very much inspired by The Seventh Seal (1957). Salvetti included some lines from the movie, but also wrote new reflections when Sara is in conversation with Death. This time, it’s not about God, but about love, as she doesn’t believe in that anymore. However, Sara is not ready to die, so the trick is to invite Death to a game that you will play for her. In The Seventh Seal, Death tells his victim, the knight Antonius Block, that he keeps asking questions, even though he never gets any answer. The same goes for Sara: “I want to know about love, but my heart is empty and emptiness is a mirror turned to my own face.”

Inspired by the puzzles of Mean Bean Machine (1993) and 2048 (2014), Sara and Death was designed to have the player follow a few simple rules, but with every level feeling different and more challenging. “Some levels are based on rational solutions, others will make you deal with chance. I wanted an element of gamble. I wanted the player to be able to brute force the solution if [they are] the persistent type,” says Salvetti.

That persistence is something that Sarah embodies. Here, she represents the archetype of human curiosity, always wanting more despite being frequently disappointed. Her hunger is as big as the one brilliantly portrayed in the short animation Coda (2014), by Alan Holly, but Sara doesn’t have the same feedback from Death. “No matter how hard Sara tries, puzzle after puzzle she keeps running in circles because she is talking to herself. Death kinda works as a mirror,” Salvetti reasons. And as empty as Sara feels, empty too are the replies she gets. It works pretty much like the dialogues of Antonius Block’s nihilistic squire, Jöns — some of them being paraphrased and modified according to the game’s context.

Sara and Death ends up being a simple but very detailed game. Even its icon on App Store pages, which is the character inside a nutshell, gives a hint about its message: “The dying fruit doesn’t know about the seeds it is concealing. Death in this game is a metaphor for the end of a period of her life, yet the last level doesn’t really end.

Salvetti got some help from friends while creating Sara and Death. In fact, Sara Bodini is a real person. She lives in Milan and is the illustrator on this project. “I also bugged Sole Varichio and Marica Innocente to learn how to match colors. Each background color could potentially have blocks of seven different colors, so finding a good contrast that didn’t look tacky or like shiny candies was difficult,” says Salvetti. And as to the soundtrack, all the music was composed by Marc Santos, and it seems hell be working on more tracks for the game — Salvetti says he wants a different one for every two chapters, at least.

Salvetti is not exactly an outsider to videogame development: he also creates casual games for practicing and to train people. Also, Sara and Death is not the end of his independent game-making road. He will be releasing a new title soon, Trump in the Sky, and after that he will move onto his next personal project: “It will be inspired by [Ryu Murakami’s] Tokyo Decadence (1992) and it will be about my London.”

You can download Sara and Death for free on Google Play and the App Store.