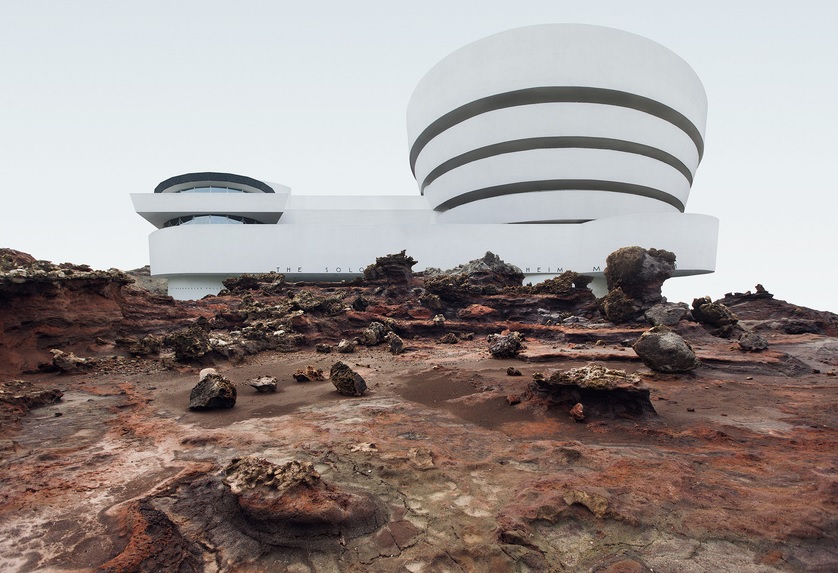 You shake some cereal into a bowl and pick up a box of milk. As you’re about to pour, you see a sign on its side: Have you seen this building? Well, not exactly.

Some mischief has been done here. At least it’s mischief of the architectural instead of criminal variety. (Granted, this line is occasionally blurred.) The artist Anton Repponen and writer Jon Earle have imagined what would happen if 11 New York City icons were uprooted and placed in foreign, desert-like landscapes. They have, in a sense, been kidnapped, though that backstory is not wholly necessary when examining Repponen and Earle’s project “Misplaced New York.”

Marcel Breuer’s Whitney (now the Met Breuer) was always something of a fortress. The inverted ziggurat, with only one window on its façade and a series of portholes-cum-bay windows on its side, sits heavily on Madison Avenue. It looks even heavier dropped in whatever desert Repponen has chosen for it—heavier, but oddly at home. It’s the kind of building that, while suited to its original site, can impose its will. “I honestly don’t remember how we got the concrete on site,” Earle jokes. “Mules?”

Even the strangest of architecture is of a time and place

The Whitney’s new home, an industrial assemblage the architect and critic Joseph Giovannini described as “a catalyst sustaining and precipitating urban activity,” is not so easily transposed. Sitting atop a brush-covered mountain, its shapes feel somewhat incongruous. Whereas Breuer’s Whitney forced itself onto its site, this new museum designed by Renzo Piano absorbs urban forms like a sin-eater. In the absence of its neighbours, the building is deprived of energy. Its fictional kidnappers have not been kind.

“Misplaced New York” ought not, however, be judged solely on the basis of whether these icons work in their new environments. Indeed, the artwork functions as a commentary on architecture precisely because it reveals the importance of context. Frank Lloyd Wright’s spiraling Guggenheim building may look like a UFO dropped from outer space at the best of times, but it looks far more alien when moved from its actual site. Even the strangest of architecture is of a time and place. “Misplaced New York,” through its amusing scale and locale manipulation, makes this reality all the more apparent. In that respect, it is more of a love letter to New York than a demand for ransom.

See the entire “Misplaced New York” project on its website.