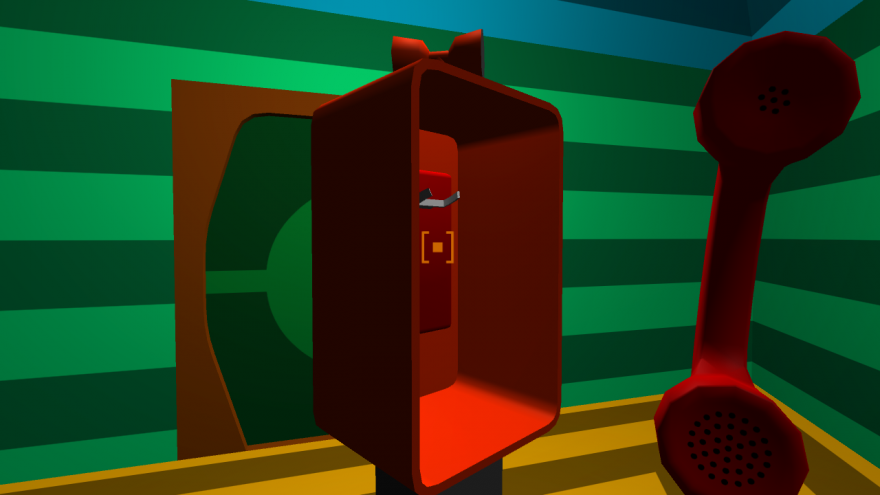 You come to, upright, in the middle of a room swirling with color. Quickly, you realize the stripped wallpaper isn’t actually moving. It’s you, swiveling your head around, trying to figure out where and who you are—how you got to this ugly room in the first place. The neon walls overwhelm, but not nearly as much as the number of doors surrounding you.

Uncertain but too afraid to stand still in this ugly room, you walk through a door.

But in this place, you will discover, only ugly rooms lie beyond the doors that lead into even more ugly rooms. In the center of each one is a lonely red phone booth. When it starts ringing, you jump to pick it up. But instead of a voice, you hear a dial tone as the ringing continues. With no buttons to press, you can only sit and listen to the melody between the dial tone. Or you can hang up.

You hang up, the ringing never ceasing.

No matter how many rooms you go into or how many phones you pick up, it persists. Like the sound of a school bell, the noise immediately inspires an all-consuming anxiety inside you. Someone is reaching out—someone is trying to make contact. But you cannot be reached. Again and again, the dial tone signals your failure to pick up.

Finally, you notice that when you turn a certain way, the ringing gets louder. You must only listen well enough in order to find the true caller. After at last picking up the correct phone, the voice on the other side sounds like salvation.

the ringing sends a wave of panic through you.

He calls himself Dudley. He’s pretty sure you’ve both been imprisoned in this god forsaken labyrinth by a man named Ogilvy and his “attack on common sense.” As Dudley calmly explains, several pieces of evidence have led him to the conclusion that you are in a never ending virtual reality simulation. For one, there’s an obvious lack of fidelity to the reality you currently reside in, two, a glance down at your feet will reveal that your feet have been mysteriously “misplaced.”

Every now and again, Dudley will cut your conversation short, forcing you to go back into the maze to look for a needle in a haystack (or the real phone among a dozen virtual copies). Each time, the ringing sends a wave of panic through you. Slowly, you come to realize that what panics you most isn’t actually the high-pitched sound itself, but rather the notion that it would stop. That Dudley would give up or go silent. That you would be left here, without explanation or purpose.

Call of Dudley is an entry into PROCJAM, a game jam that hopes to make procedural generation more accessible to both players and creators alike. Like the moment in Davey Wreden’s The Beginner’s Guide, Call of Dudley appears to equate the relationship between a player/creator and the game to the act of picking up a phone. As in the The Beginner’s Guide, you are left clinging to the receiver, trying to make out the voice on the other end—but it sounds too faint. It doesn’t matter anyway, though, whether or not you can hear. All you really wanted was to know that you could pick up—that someone would be on the other end. That someone was reaching out, trying to communicate.

As in both the The Beginner’s Guide and the likes of A Clockwork Orange, you can’t trust anyone in Call of Dudley. Neither the narrator, the world, nor even the medium itself is reliable. Narrative is inherently a pack of lies. Videogame realities are inherently broken. You stand upon a foundation built like a house of cards and magic tricks. The mediated message you cling onto the phone to hear will crackle and cut short unexpectedly. It will crash into the void.

As the player, all you can do is go down with it.

You can play Call of Dudley on PC, Mac, and Linus for free here.