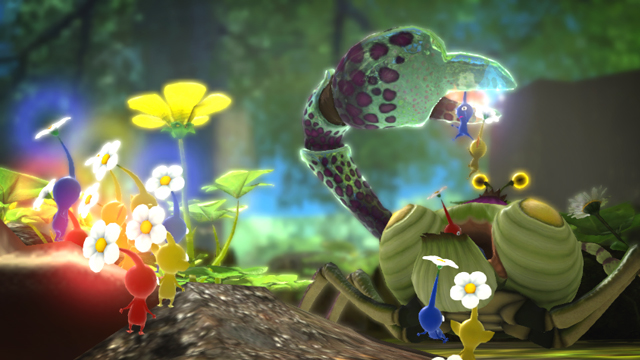 My wife sits on the couch as I play Pikmin 3. “They’re so cute!” she says.

And indeed, the tiny pod-people called pikmin, with bulging eyeballs and leaves sprouted from their heads, are adorable. But it was getting dark on planet PNF-404. Time to saddle back to the spaceship and blast into orbit until daybreak. My miniature astronaut waddles back to the ship, a horde of yellow and red pikmin scrambling to keep up. The engines fire; my ship and its cargo rise into the sky as the camera lingers on the planet below. A single yellow pikmin saunters back toward the launching area, wondering where its friends have gone.

“Oh no.” My wife realizes something is wrong. “What’s going to happen to it?”

“What’s going to happen, Jon.” This is not stated as a question. The sky darkens. The slug opens its slobbery maw and lunges. We hear a tiny squeal as the camera pans up, mercifully, following the ship and its safe inhabitants. “What just happened, Jon!”

After minutes of passive observation, she felt a modicum of love for these creatures. And, when I failed to save every one of them, the requisite grief. And then anger.

I promise to save her. Even better, she says she might want to start playing the game, too. Whether it was to secure her own pretend livelihood as a Pikmin, or to leave scores of fake me’s behind, wandering helpless and afraid before a swift devouring, she does not say.

That’s Pikmin 3 in a seedpod: a lush exterior giving way to cruelty and nature’s harsh rules of survival. The game is like nothing else you’ve played–unless you’ve played Pikmin or Pikmin 2. With the series dormant since 2004, nearly a decade has passed, plenty of time for some enterprising designer, perhaps Lemmings’ David Jones or Sim City’s Will Wright, to evolve franchise creator Shigeru Miyamoto’s template of miniature explorers growing and commanding plant-like servants on a hostile but familiar-looking planet. None have tried.

So the father of Mario, Link and Donkey Kong saw fit to reintroduce his lesser-known baby to the world. And like a newborn, we coo and “aww” at its fragile beauty, all the while understanding fully the dark secret buried inside.

Never before has a game exhibited the stark faceless truth of mortality in such colorful packaging. At the end of each level, your lost Pikmin are tallied, the final amount of deceased given a number colored an off-white. At the time of writing, I witnessed the end of 366 tiny lives, each rising off the screen, a blue spectre wafting up like smoke from a burnt match. They never had a chance. Neither, I guess, do we. But we do our darndest to stave off the inevitable.

Pikmin 3 is about that quest for survival, and with it, food. Videogame food tropes have always treated nourishment on a points scale, like adding change to a parking meter. Eat a cartoon turkey leg and add ten units of health; spend the night at an inn (while tucking into the host’s homecooking, no doubt) and your life meter miraculously fills the next morning. Even Bioshock Infinite, a game allegedly interested in a complex, emotion-driven narrative about people and ideas, fills you up on magical Hot Dogs.

In Pikmin 3, your life is quantified in time, not points. At the end of each day’s efforts, you drink a vial of juice. Alongside finding lost companions and battling the natives is the ever-present priority: Find more food. So you enlist your Pikmin to drag fruit back to your ship, where it is squeezed and drunk. This is how food works: Expend energy, then refuel. Those reading this are lucky enough to be gluttonous. We refuel and refuel, eating just to expend, feeding our mouths or our cars or our air conditioning units until the power grid shuts down or gas is $100/barrel or we’re buying elastic waistbands. But Pikmin 3 has little to say about modern life. Nor does it adopt modern game conventions.

A perfect run in other games requires not a single piece of roasted cartoon chicken; if you take no “damage,” no food is needed. But to run down a hallway or leap from a building or merely wake up and get out of bed–all of this describes the damaging of a body. Pikmin 3 understands this. Without fruit–luscious fruit, fruit ten times the size of your explorers, fruit rendered so lovingly it allows you, the player, to rotate this Fruit As Savior and observe a watermelon rind’s glossy splendor–you die.

The entire game’s premise, in fact, revolves around a planet running out of edible resources. Your people will starve unless you bring home replenishable goods. In this way, Pikmin 3 is, finally, a realistic depiction of Armageddon. The world won’t end from a massive asteroid, or an alien invasion, or an outbreak of zombie plague. We will consume too much. We’ll have nothing left. A day will go by without enough food or energy. Then a week. Eventually we’ll run out of time. Not even an Innkeeper’s soft bed will save us then.

They never had a chance. Neither, I guess, do we.

I’m playing again, this time pushing off my own dinner-time to get in another level. The game works the way a good meal does: a well-paced array of tastes, not bountiful but enticing enough to always want more. My wife isn’t home from work yet. Within the game and without, the sun is beginning to set. After a long battle my red Pikmin, the aggressive ones, have pounded into submission a giant spider-like creature. As it falls, a kiwi, hidden within its belly, drops to the ground and splits in two. I fling the required allotment of ten pikmin towards the fruit and they lift up together, waddling back toward the ship.

But the weight of the fruit slows their movement. Ten tiny pairs of feet strike the ground, each footfall sounding of dropped toothpicks. I wander off to do some reconnaissance for tomorrow’s productive day. I forget about my kiwi-carriers. Soon our time is up; my explorer scoots to safety before I realize who’s been left behind. The Forgotten Ten knew enough to drop the fruit and dash after us, to no avail.

And as I watched with diminishing terror my helpers swallowed up by another nocturnal beast, I notice the relish with which it devours them, and I recognize these sounds of gleeful consumption as my own. I’m sorry, little Pikmin. Sacrifice is necessary if we’re to quench our hunger.