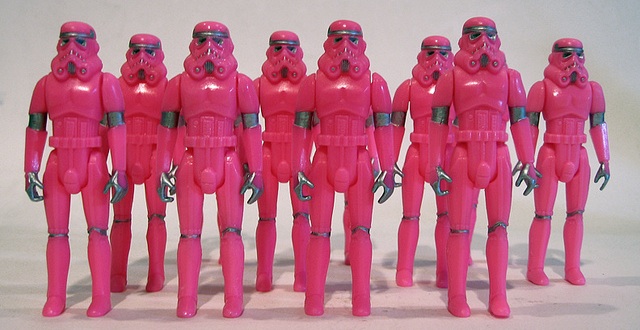 If you’ve spent more than five minutes poking around the Internets for bootleg art toys, it’s quite likely you’ve stumbled across the work of the infamous Sucklord. He’s been at it for two decades, and along with “slinging resin,” the Sucklord also offers trading cards, books, shirts, and original music. Art paid the rent for the native New Yorker, born Morgan Phillips, but then things got crazy when he was selected to be on the second season of the Bravo Network’s reality show, Work of Art. Tough critics like Jerry Saltz advised the streetwise toy lord to abandon Star Wars. In the end, the Sucklord created an action figure of Jerry Saltz, and demand for his toys exploded to levels he’s never experienced.

The Sucklord’s Lower East Side studio is how I imagine a Beastie Boys hotel room circa 1988, with the addition of hundreds of plastic toys scattered everywhere. We chatted about the toy world, the art world, and the lines in between.

Is your work still rooted in Star Wars?

Well, no. I am definitely using the familiarity of Star Wars—it’s just a universal language that Star Wars conveys—to make my own original art statements. It’s a pink Stormtrooper, but it’s an appropriating of symbols, rather than an homage to Star Wars.

What does that mean?

I would say zero.

It seems that’s the case. Is that an exaggeration? Or are there other kind of bootlegging toy artists?

Yes, there are. I mean, I’m definitely the first guy to have done this—to actually take like an existing Star Wars figure, or any kind of toy, and cast it and make a mold of it and change it around until it was something different and weird and somewhat shoddy-looking. There are other artists now that work in resin, use the same materials, but they’re making their own characters; they’re not necessarily considered bootlegs of other toys. There is a subset of the resin crowd that does specifically bootlegs, which is essentially kitbashing other toys, casting them in different weird configurations and putting their own spin on it. But none of them do it as well or as consistently as I do. If I do say so myself. They’re all on my dick.

You’ve mentioned that when you’re going to play with toys, you go for Playmobil or Legos. You’re not necessarily designing for play; it’s more like an art piece.

It’s more of a collectible. You’re not even supposed to take my figures out of the package; they’re not designed for play. I don’t necessarily consider what I do a true toy. I’m not saying that that automatically makes them art, either. That said, the main way that people interact with designer toys is to customize them. People just paint on them or sculpt on them or create their own characters out of them. That’s about as far as the play goes in this world. There are different types of play, you know—there’s construction play, like Legos, Girder and Panels, Erector Sets; and there’s fantasy play like Playmobil, where you have these figures and you make up stories and set up little worlds—that’s what I like to do.

There’s a lot of crossover interaction. Even Mattel is borrowing a couple of notes here and there from the designer toy world. And people in the designer toy world are also really influenced by Hasbro stuff. I think toys in general are an evolving conversation. I think it’s one of the most exciting sort of creative movements going on in the world today. I don’t understand the contemporary art world.

But the toy world is so interesting; there’s this whole world of personality and entrepreneurialism and manufacture. Movies and fantasy and comic books and videogames—all these things are so much more connected to the world of popular culture, which I don’t think the art world is concerned with. And neither does the world of pop culture seem interested in contemporary art all that much; they just want fucking toys and videogames. And I think that’s where all the action is.

There’s kind of a stigma attached with art toys. The nostalgia that you have for action figures seems to involve not only collecting them, but playing with them as a kid. Whereas if you want to explore your nostalgia for ’80s videogames, there are new videogames that you can play as a 50-year-old person. It’s not considered as strange as if you were to sit down with action figures, and play with them.

Yeah, you’re actually right. It’s something that a lot of people don’t talk about. When they collect designer toys, it’s always, “I’m a collector,” but to actually sit there and go “pew pew pew”—how would adults play with toys? I mean, I do play with toys. I want to get every Playmobil set I’ve ever wanted, and just set it up in this big room and create these worlds and stories and intricacies and give every character an arc, and make them interact. It’s almost like writing a book in a way. Most people think that playing with toys involves going, “Zhhh, zhhh, zhbew zhbew zhbew zhbew.” There’s more to it than that.

There’s a real narrative in your Toy Lords of Chinatown episodes on YouTube. It seems like you’re kind of playing as those figures and those characters a little bit…

I got my first video camera in 1980. I was 11 years old. And I’ve always been acting out stupid shit in front of a camera. Now that I’m older and more together and I can actually do something a little more defined, it’s still pretty raw. They’re not that fun to make. It’s stressful.

I’m just a guy asking his friends for help while making all the props myself. A lot of the times we shoot in the street. And if a cop bothers us, or there’s a car parked where we want to shoot, you just gotta get it done, and you know it’s hard. Once the shots are in the camera and I can sit in front of the computer, sculpting the raw footage into a story—that to me is the real fun.

I’ve always made little stories and movies, and I was always sculpting with all these other plasticine clays, my little figures. I was right when I was a kid about what I was good at and what I should do with my life. And it’s just taken me a couple decades to get it kicking. It’s happening. It’s definitely happening.

So what goes into choosing a figure? How many different types of figures do you make in a year?

Twenty-five, maybe? I kinda make this up as I go along. I have different reasons for doing different things. This particular line of things I’m doing for San Diego Comic-Con, they’re all gay. We’re going to do a gay Star Trek, a gay Transformers, we’re going to do the gay Peppermint Patty, and do a gay He-man.

Peppermint Patty’s never directly referred to as gay in Peanuts, and I’m not necessarily saying that Schultz intended her to be gay. I’m just making a broader statement that, like, gay has always been here and gay is part of everything we’ve ever been into ever; you think that gay is some new thing or whatever, there’s been gay since everything was anything. There would be gay people on the Enterprise, there would be gay robots. That’s all no-brainer, and by putting it out, it’s just saying, get used to it bud, get used to it.

You seem pretty content with where you’re at now. Is the hope to keep doing this into the next decade?

No, not at all. I would really like to stop slinging resin like in the next two or three years. I would love to not have to do this at all.

I’m thinking of creating my own IP [intellectual property], and then actually owning the companies that manufacture and produce and distribute. So I license for myself, essentially.

Are you envisioning original characters?

Yeah, I mean, we’re going to see… In my appropriation of Star Wars and other pop culture, it’s sort of like putting vegetables in a blender—you put ’em in, and you don’t press the button at all; you can see the chunks, you know? And you press the button and it breaks up and the chunks become smaller and the references become a little more vague, and if you really puree the shit of it, it becomes this homogenized concoction where the influences are all equally blended and something new comes out.

So, the Toy Lords is an effort to go in that direction. They’re new characters, and it definitely borrows a lot from Star Wars, but it also borrows a lot from everything, from Blacksploitation movies to gangsta movies, and the direct line of reference is going to become blurred. I mean, even George Lucas ripped off tons of shit.

That was one of the biggest failures, or at least fucked-up experiments that I undertook on Work of Art, and it’s what cost me the game. When [one of the judges] Jerry Saltz told me to stop using Star Wars, I thought he did kinda have a point—how long am I gonna do this, or how much of this should I do, or when does it stop, and it’s like, OK, I’m just going to try to not use Star Wars in anything I do. And I can’t just do that in a day. It was like taking the battery out of the car.

It seems like Work of Art is the kind of thing that you wouldn’t want to admit having a big effect on you.

It’s designed to break you down. It’s a psychological experiment. You’re taken out of your comfort zone. You’re put in a structured game, like a rat in a maze trying to get rat cheese in a maze, and then rewards and punishments are set up, and you have to go and perform the task.

And it gets to be taxing, and the lack of sleep, the constant judging, watching people around you win and lose—it accumulated to the point where I lost myself, or at least I lost my ego on my art, my identity. I feel like my humanity survived and actually maybe shined through.

I think the art world is the playground of richer people. The toy world is more of a working man’s art. You don’t need a lot of money to become a collector; you don’t need to be in the know. You can just like what you like.