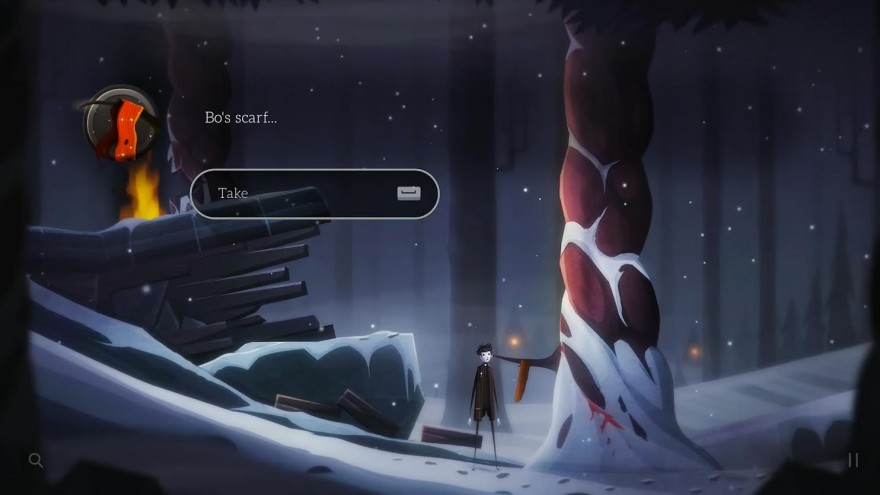 Teddy isn’t looking so good. Stood in the freezing cold of Hell, his shawl visibly shivering, a crescent of stubble clings to his jaw and chin. This ex-minister is in search of his daughter, Bo, who has been kidnapped by a “strange entity” that claims to be God. Whether he asked for it not, it seems Teddy’s faith is being thoroughly put to the test—his responsibility as a father even more so.

This is a snapshot from the upcoming 2D adventure game Pinstripe. Thomas Brush has been slapping paints and computer code all over it for the past four years, intermittently between freelancing and home life. Now, at last, he’s put it up on Kickstarter, where it blitzed past its base funding goal of $28,000 in a small number of hours. This means he’ll be able to concentrate on finishing Pinstripe over the next few months, put a beta build together, and then get it released on Steam for PC this summer. Slap, bang, wallop.

Over the years, Pinstripe has evolved from something Tim Burton would probably cough up onto a reel of celluloid to, well, a gruffer version of that. Teddy has always had those inch-thin Jack Skellington legs, but now he has distressed-dad facial hair and religious attire. The blobbier art of the game’s earlier days has transformed too, becoming more stringent, Expressionist—exaggerated straight lines and harsh angles (one tree’s branch is literally a right angle). What this suggests is that, over time, Pinstripe has become more harrowing, harrowing, harrowing! This rings true: Pinstripe used to be about a dead man searching for his wife, now its plot is more desperate and looks to test Teddy’s will that much more.

In adapting to his new dadcore makeover Teddy has also gained a shotgun and a puppy called George. The former deals with the screeching monsters and also acts as a rather blunt puzzle-solving instrument. There are other puzzles that take more traditional formats, such as ticking clocks, which presumably have less violent solutions. Or maybe that’s a false assumption. Perhaps Teddy hates clocks. Imagine it now: Him facing a wall-mounted clock, a stern expression on his face. “Fuck clocks” he shouts. Then blows a giant hole into the wall with an almighty bang, afterwards panting heavy with the anger. Teddy’s got it rough, I’m telling you.

another aspect worth latching your feelers around is the music

As to the puppy, you’ll be pleased to find out that it hasn’t got a violent streak in it at all. Instead, it helps Teddy to find clues that will reveal more about his past. Oh yes, he is in Hell, remember? How he got there is rather slyly omitted in all of the text that describes the game and tells us what it’s about. But it could be that he’s dead. In any case, there is presumably a reason for why Teddy is now an ex-minister, which is surely a ripe topic to dive into between stroking George and kicking the shit out of clocks.

As well as the art and the themes of Pinstripe, another aspect worth latching your feelers around is the music, especially as Brush has won awards for his sound work in his previous games, Coma (2010) and Skinny (2011). For Pinstripe, it seems he’s going for a mysterious ambient sound pinched together with classical piano and medieval instruments. It’s a work-in-progress still but you can float your ears over to Soundcloud for an early impression.

Currently, Pinstripe is steaming towards its set of stretch goals, which includes an extended level in heaven (already reached), an Adventure+ mode that has new discoveries after the first playthrough, full voice acting for the odd characters you’ll meet, and a mobile version of the game.

You can support Pinstripe over on Kickstarter.