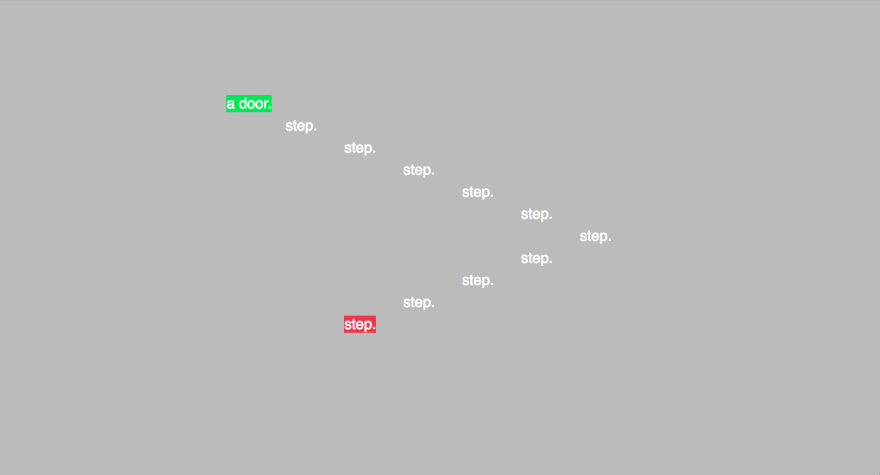 Concrete poetry is the method of using a poem’s shape or visual arrangement to convey meaning or, at least, to form an image relevant to the poem’s themes. A famous example is Silencio (1954) by Eugen Gomringer, which repeats the world “silencio” (silence) 14 times to form a square block with a void at its center—the block evoking ideas of silence as an oppressive tool, but the emptiness in the middle also read by some as a form of peace.

Pippin Barr uses the technique in his new Twine game Burnt Matches but expands on its utility through the use of hypertext. As with concrete poetry, Barr uses words as representative of objects found within a location, with the graphical placement of those words forming a 2D representation of that space. Certain words can be clicked on to make other words appear on the screen so, for example, each time the word “step” is clicked on in one scene, another instance of the word “step” appears below it so that together they look like a set of stairs. Words aren’t just objects, then, but boundaries and architecture; this is text as topography.

Barr originally started making Burnt Matches as part of the Deep Time Jam, which was conducted by Speculative Play project, which brings together “the critical practices of speculative design with the hands-on experience of play.” The jam started off with the participants collectively watching the 2010 documentary Into Eternity, which is about the Finnish nuclear waste facility Onkalo, and how it was designed to last for 100,000 years. “A key idea that we all latched onto was the idea of people in the ‘deep’ future encountering the facility and how you would help them to understand what it was and in particular that it is a dangerous place they should not enter,” said Barr.

He wanted to make a virtual representation of Onkalo that contained computer interfaces with a language that was long lost to time, making them incomprehensible. During the jam, he only got so far as making these computer interfaces, integrating JavaScript and Twine to randomly generate them with strange unicode character patterns and animations. He continued work on the game after the jam but found himself stuck on how to incorporate the writing he wanted, which needed to evoke tone, address the player, and be descriptive. “I was eventually rescued by the idea of using text to represent the space itself, rather than to describe the space,” Barr said, “so Burnt Matches is partly about representing spaces ‘directly’ in Twine/HTML rather than representing through narrative text.”

Barr not only adapted the ideas of concrete poetry, though, but also turned poetry into concrete: at one point in the game, a corridor in the facility is repeatedly identified by its overwhelming concrete presence. It starts with the material itself—”rough concrete” and “cracked concrete”—but goes on to elicit its everlasting, oppressive qualities with lines like “the weight of concrete.” These poetic touches didn’t exist in the game at first. Barr added them later to remedy the “blank” text that he had fell back on—the language only denoted spaces rather than making an effort to express the themes of the game. T. S. Eliot’s 1922 poem The Waste Land, a past obsession of Barr’s, helped inform the changes to Burnt Matches that he sought to make.

“I ended up using both the thematic/language aspects of the poem (e.g. imagery of rock, thunder, water, hyacinths, etc.) along with the actual structure of the poem itself, which is in five parts themed around particular ‘elements’ in a way (water, thunder earth, etc.).” Near the game’s end, Barr goes so far as to recreate “The Waste Land” as a final, corrupted space for the player to enter. There, text flashes in spasm, glitches, peculiar characters appear and disappear amid a red and black backdrop alongside a cacophony of industrial noise. “In some ways I might almost view Burnt Matches as a form of adaptation of the poem into a new form, though only loosely,” Barr said.

The most powerful part of Burnt Matches for me is how clicking on some objects incites their decay. As you click on them, objects like “leaves” become “dry leaves,” then “pieces of dry leaves,” and finally “fragments of dry leaves.” Similar entropy infests “a rat’s bones,” a “dim light,” and “a shell.” For me, this degeneration through text communicates best the idea that the facility is a dangerous place, and that it only holds death within it.

You can play Burnt Matches for yourself in your browser.