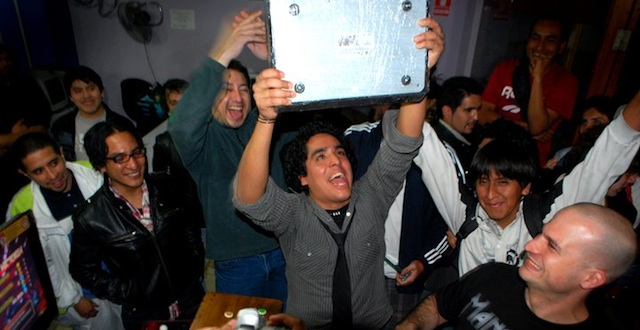 Comas is a dusty and elevated neighborhood north of Lima. It was created when Peruvians came to the capital city in the ’60s, looking for a better future. Here, the Calzada family opened an arcade center. Jaime, one of the siblings, is now 27 years old, and he’s waiting for his turn at a local Street Fighter tournament.

The arcade center was named La Pascana, after the street where it was located. Jaime’s parents were the ones in charge. His father was an electrician and a carpenter, so he made the electrical adjustments and the wood cabinets. His mother was in charge of the customers, from which the family got a daily income between 200 and 300 soles. At that time, the minimum monthly salary in Peru was 500 soles, so the arcade center was a small goldmine. Each noon, after classes, Jaime went to La Pascana and made his homework watching others play Donkey Kong and Vigilante. At the time, this place was one of the few game centers, so people from other districts came here to play.

The activity heightened when Street Fighter II came out. It was the first game that Jaime played competitively. He was the best player in La Pascana, receiving challenges from players across Lima. “When there is a group of people who play a game, I like to demonstrate that I’m the best,” he tells me. When Jaime plays Street Fighter IV, he uses Abel, the French mixed martial arts brawler. But when he started playing in Comas, there were only eight fighters to choose from.

After Street Fighter II, Jaime became interested in The King of Fighters, and then Marvel vs. Capcom 2. In the latter, he became the best player in the city. But at the time, he was 20 years old and needed money to pay for his studies in electronics. So he stopped playing and began to work.

“That was until a friend told me to check out the new Street Fighter IV”, Jaime says. He had recently stopped working. So he installed the game on his computer and bought a piranha stick (a homemade accessory built from wood and cheap electronics found in the local market for $40, and that was popular in the arcades in Lima in the ’80s). Another pal told him: “You are good; why don’t you go and play at The Backyard?” It was the name of the small videogame fight club in the city. Jaime accepted the challenge. “The first time that I went to The Backyard, I won a mini-tournament. I got respect.”

The people from The Backyard taught him how to play online. So he decided to buy an Xbox 360 and an official stick. “When you play with a piranha stick, you almost have to press the buttons with two fingers. It’s really hard. It’s better if you play with an original one,” Jaime tells me. “So I had a console, a stick, and an internet connection. I had everything I needed to be the best.”

Last year, he won the national Super Street Fighter IV championship at the Ragnarok Lan Party. The prize: entry to the DreamHack tournament in Sweden. Arriving at Jönköping, Jaime didn’t understand a thing: he didn’t speak any language but Spanish. But the organization that had brought him to Sweden found a translator, and he was able to talk to the other players. One, an Irish gamer, asked, “You are from Peru? Where is that? Near Mexico?” The only South American player in the tournament, Jaime qualified to the second round without problems.

Like major tournaments such as EVO in Las Vegas, DreamHack shows the enormous disparity between international players. Many of them are sponsored and paid for playing. For Jaime, for whom playing Street Fighter had been a hobby, the importance given to games was shocking. He also found that his training in Peru hadn’t been the best. The monitors used in Sweden ran at a different speed than those that Jaime used in Peru—milliseconds faster—because of input lag; and almost all his moves didn’t have the same impact as they had in Lima. He was handicapped by his background. Moreover, Jaime discovered that some pro gamers practiced 10 hours a day. He had only played for five hours each week.

In the second round, Jaime lost without winning a match. That was the end of his dream. He returned to Lima and continued his studies, while the rest of The Backyard trained harder in order to beat him the next time. For Jaime, the reason for playing Street Fighter is the same as when he began at La Pascana. He just wants to show that he is the best.