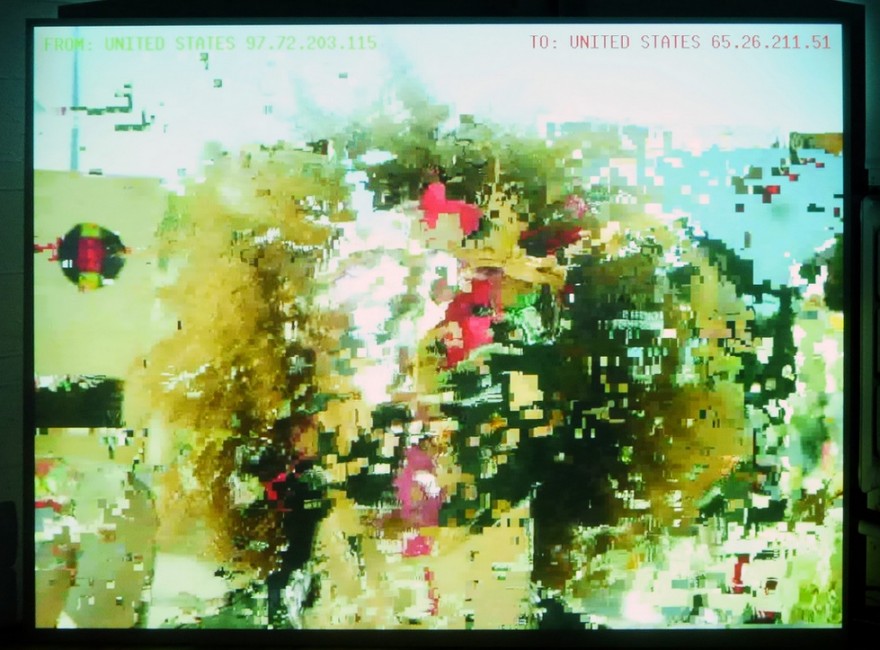 Think about how many millions of megabytes and data particles travel invisibly around the world every day. All the films, music, videogames, and other electronic media that we squeeze through BitTorrent, trading computer-to-computer without limits. The internet, and more specifically peer-to-peer computing, has allowed us to share information with such speed and spread that its criminality is almost insignificant.

a cinematic collage generated by this rampant network activity.

It’s in this mass exchanging of digital goods that artist Nicolas Maigret sees a return to the utopian vision that the early days of the internet promised—”it permits individuals to produce, to distribute, to share, to work together with other individuals without asking permission,” as Michel Bauwens put it. With only a couple of clicks of a computer mouse, we have the freedom to establish relationships with whoever and whatever we want, for better or for worse.

“This model is more than a type of digital network architecture, as it clearly reflects ideological choices that have an impact on the way society is understood,” writes Maigret. One of his most recent projects is an effort to convey and explore what he calls peer-to-peer architectures. It’s called “The Pirate Cinema,” and it’s a cinematic collage generated by this rampant network activity. “[O]mnipresent telecommunications surveillance gains a global face,” reads the project’s abstract.

It works by intercepting the data that’s being transferred in the Pirate Bay’s top 100 torrents, which it then projects onto a screen before immediately discarding it. This process happens again and again to form a mash up of fragmentary files. To watch it, you’d see disjointed half-second clips from iconic cinema spliced with porn, documentaries, music videos, and soap operas. These are often scrambled, interlaced, and distorted by the digital noise that often comes with the process of torrenting. It’s an aesthetic defined by the “chaotic scraps” of media that we pipe to each other in chunks for our computers to reconstruct. It’s as terrifying as it is overwhelming.

As well as being a video installation (which you can watch here), The Pirate Cinema can be realized as a live performance (and was back in January) during which an artist tailors the temporal and formal structures of the downloaded files. The potential here is in connecting the visuals to a specific context, whether it’s based on politics, place, or culture.

the film format as a digital stream.

Whatever way you experience it, the idea is to present the film format as a digital stream. It represents both the process of how media gets to us and the way we interact with it today. It’s not restricted to concerts or the cinema, but has been made personal, streamed directly to our phones and laptops bit-by-bit.

“It reveals, through a simple diversion, different aspects of exchange platforms, such as the global and multi-situated nature of Peer-to-Peer networks (P2P), the potential for viral transmission, and alternative social models,” Maigret writes.

You can find out more about The Pirate Cinema on its website.