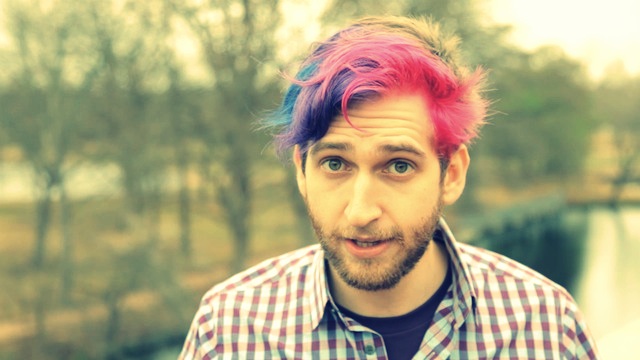 A kaleidoscopic strobe of bright fractals and weblike waveforms, which, oh, by the way, is controlled by singing, SoundSelf aims to make you happy. But, really, it goes beyond happiness. Euphoria is the word used by it’s engineer Robin Arnott, who considers his work to be scientific research into mental states. This is despite him looking more like an artistic raver, with bangs that fade from deep purple to fluorescent pink at the ends, which may or may not glow in the dark. Revealed on Kickstarter last weekend, his blissed-out experiment is the diametrical opposite of his previous project, the claustrophobic, physically-restraining Deep Sea (which required both willing and unwilling participants to be strapped into a freakish diving mask), and by the end of our interview Robin was lying in the grass outside his home in Austin on a chilly Sunday morning.

Kill Screen: SoundSelf is still in development. What’s your missive?

Robin Arnott: It’s hard to explain, and I definitely reveal myself as a total hippy when I do. We’re trying to leverage a few really interesting short circuits in human perception to make the player feel that their sense of self expands to include everything around them. It’s a profoundly moving experience.

How does it work?

The way you describe it reminds me of echolocation. The player makes a vocalization and it goes into the computer and back out?

Well, for example, you’ll see a shape form as you’re chanting, and you might sustain your voice in that way to play with that shape. It responds to what you’re doing like that, but it also takes you on what I’ve been describing as a journey through really beautiful visualizations and sounds. You get the sense that you’re moving through something–that the game is taking you somewhere, unlike a visualizer or toy.

In the Kickstarter video, there’s a brief clip of you recording sounds for the game. You are hitting a tube-shaped object with a mallet and chanting. What’s going on there?

That’s one of my favorite new sound toys. The sound it makes is very tonal. We need them to be close enough to fool your brain into thinking that the sounds are coming from you. I found if I sing into it, it creates a really interesting oscillation.

So, SoundSelf is an interaction between the player, and you as the sound designer, and the computer?

Absolutely. It’s like a dance. It feels like you’re dancing. It seems to have its own intentions and guides you. Sorry, I just got distracted by something. . .

I know stuff like this is difficult to talk about.

It’s very hard to put into words. It’s modeled on experiences that are difficult to describe, like group aums. I don’t know if you’ve ever participated in one, where you and fifty or a hundred other people are creating a sound together.

Also, you told me it’s modeled on your previous game Deep Sea.

They are intimately connected. Deep Sea taught me so much about perception. Just the experience of being enveloped in darkness and feeling this sweaty mask against your face and being deprived of oxygen totally contributed to hooking people’s imaginations. It was breath-focused. With SoundSelf, we’re going back to breath. But I think ultimately it’s much more interesting to use those techniques to introduce people to euphoria and connect people to the ecstatic, pure, joyous parts of themselves. Why wouldn’t you do that instead of creating a horrific experience?

I imagine one reason is because it’s hard. Most games feed off of negative emotions.

It is very hard. I think it’s because as humans, we’re wired to survive, and survival means keeping your imagination open to negative possibilities, so it’s a lot easier to hook into that space. But I tend to think of videogames as practicing emotional states, and what would be more wonderful than to practice joy?

So how do you engineer joy?

I’ve been spending a lot of time since Deep Sea, um. . . I’m having difficulty finding the words for it. . . [Long pause.] We’re doing a lot of techniques that take advantage of our inability to process lots and lots of information. We’re doing lots of strobing effects.

Absolutely. Whereas Deep Sea was total sensory depravation, SoundSelf gives the mind too much to process, and the result is a submission to pure perception–as opposed to perception as a tool for making meaning.

Does it? We’re surrounded by so much information, especially in the digital age, that putting chunks of information into boxes and groups is essential to making any sense of the world, but it’s a totally prostrating experience to resist that, to let yourself be overwhelmed, and that’s the kind of experience we’re trying to facilitate.

And what other ways are you trying to facilitate that aside from strobing lights?

Dramatically shifting colors. We’re pretty much sticking to abstract imagery. What’s really good is having shapes that are clearly structured, but that the logic is complex enough that you can’t grab hold of it and say I know what that is. It’s tickling the part of your brain that’s trying to make sense of things.

What would you compare it to?

Clouds, maybe. The reason we love to look at things like clouds is because there’s so much complexity within the shapes that you can’t grasp it. You feel. . . I think awe is the word. As soon as you understand it though, it’s no longer awe-inspiring. I find it incredibly relaxing and refreshing to watch clouds form in the sky. It’s a reminder of how amazing the world is.