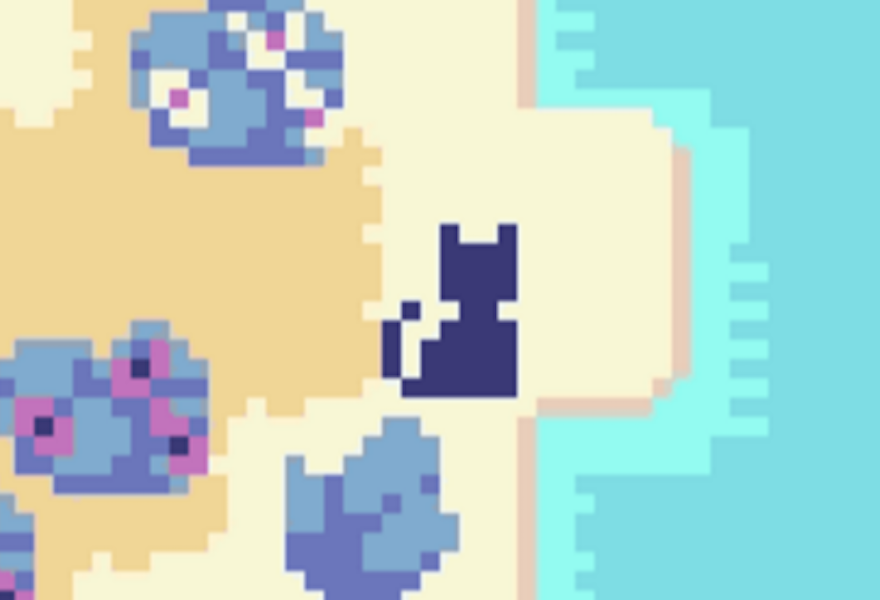 Let’s start off with a confession that’s sure to have my friends messaging me all day: I don’t really like cats. I know, I know—I’m nerdy, I’m introverted, I write about games on the internet, I’m queer. By all accounts, I should be queen cat over here. But ever since growing up with my adorable labrador retriever, Gretchen, I’ve always been more partial to dogs. I don’t particularly have anything against cats; I just tend to have a bit of trouble finding them cute.

After playing ᗢ, though, I may finally be a convert. Created by duo katslevania and takorii, ᗢ is a first hand look at what kitties do when their owners let them out for the day. The player takes on the role of a lone black cat exploring a set of islands, and the game gives them little in the way of direction or goals beyond “arrow keys to move”. You swim, you climb trees, you stowaway on ships, you take naps in old caves. Just like a real cat, you simply do whatever you like whenever you like, and everyone who would tell you no can buzz right off.

This combination of player freedom with a lack of explicit objectives makes for a calming experience, and it’s hard not to get attached to your cat as it paddles from shoreline to shoreline like it owns the place. But just as you’ve startled your hundredth bird and begin to declare “These islands are mine,” you start finding yourself blocked off by strange gates and mysterious symbols. Ambient, mystical tones begin to pop into the soundtrack, and your caving trips slowly give way to ancient ruins and statues. It would seem that there’s more to this day than a simple trip to the beach.

If this were any other game, this is where there would be hints of either danger or wonder, maybe a Lovecraftian menace to confront or an ancient hoard of treasure to discover. But these aren’t really things an animal can appreciate, and it makes for an endearing perspective not usually seen in these types of stories. Imagine if Indiana Jones were less “This belongs in a museum” and more “Can I eat it?” This cat is chill, and it has a point. I’d probably get more use out of a bed than a pile of gold, too.

However, by the end of its dungeon dive, this cat will have found something worth caring about. I won’t spoil it for you here, but I will say that I left the game thinking that maybe cats are more capable of love than I’ve given them credit for. I’m not exactly at the point where I’m willing to adopt a cat yet, but hey, maybe I’ll hit up the cat cafe once in a while and try to see what all the fuss is about. I owe my new pixel cat buddy that much.

You can download ᗢ over on its itch.io, and you can follow kat and tak over on their respective twitters.