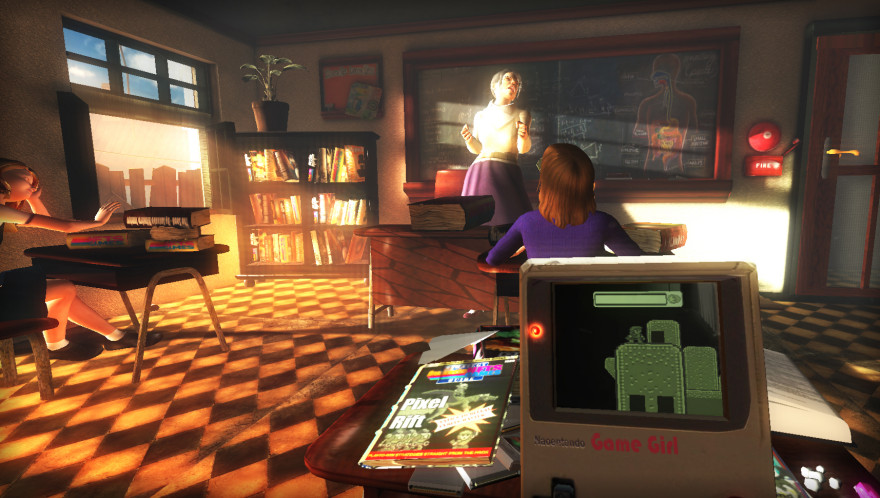 You are Nicola, a gaming addict who only wants to get back to her favorite game Pixel Rift. The year is 1989 and you are in a classroom, trying to sneak time away from learning. But you are also you, a human being wearing an Oculus Rift, playing Nicola while she plays Pixel Rift on her Game Girl handheld device.  That’s because Pixel Rift, the VR experience, not the eponymous game inside a game, is an arcade game simulator.

Yes, “arcade game simulator” sounds like an Onion article, but Pixel Rift is the brainchild of Ana Ribeiro, a games design and development student at the prestigious National Film & Television School in the U.K. It’s part of her final project and is heavily based on her memories as a child, which explains why she ultimately would like to make the games she was so enraptured with during her youth.

As strange as the idea of playing a game inside a game sounds, it has a precedent, of course, in the world of games. Rockstar has, of course, dotted the worlds of Grand Theft Auto with its own in-game arcade games. But what Pixel Rift challenges is the idea of what can’t be replicated in VR. What I find curious is the idea that we may lose some semblance of touch with the world we came from, which is exactly the point Ribiero is making of course.

In our virtual reality issue, Chris Breault astutely predicted that once we produce a VR helmet that can recreate the sensation of taking the helmet off, we’ll all be in trouble. Let’s hope Pixel Rift isn’t a sad but true commentary of what lies on the other side.