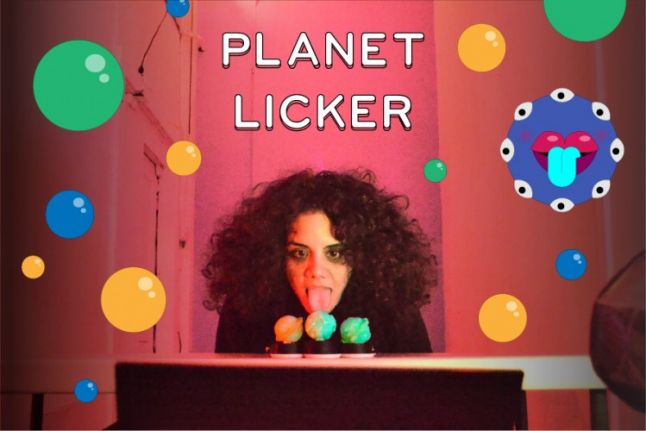 By far the most innocent game with the smuttiest implications at GDC this year was the alternative controller entry entitled Planet Licker. In the game’s fiction, you are a monster who eats planets made of popsicles. As the player IRL, you are also a popsicle-licking monster of sorts, only instead of planets your tongue is manhandling an edible controller.

Planet Licker not only puts your tongue to the test; it’s also a race against time. You have to schlurp up six planets before the clock runs out. As part of the annual ALT.CTRL.GDC showcase, Planet Licker was an unusual experiment for creator Frank DeMarco, to say the least. “It definitely changed the way I thought about game design, more than I thought it would,” he says when I caught up with him in the expo hall on Thursday. “I usually make very traditional games, like 2D arcade style games with simple mechanics. But the idea for this was just so good, I knew we had to make it work.”

Designing for the tongue proved to be a unique challenge, too. Flavor, taste, and texture were the most important elements to nail down, since players don’t really have time to look down but need to be able to differentiate the inputs while licking. Of course, the team took precautions to ensure the controller was safe to use as well. The popsicle buttons are single-use, and the controller is sanitized after each use to account for overzealous players (like myself) who might spread their sticky enthusiasm via mouth juices. The tech behind the controller is deceptively simple, too. “You’re actually just closing the circuit between two disconnected wires with your tongue,” DeMarco explained.

When it comes to players, DeMarco noticed there are two different types of people who were intrigued enough to stop by the booth. “One is the type of person who’s really interested, but too skeeved out to play it themselves. But they’re still too fascinated too turn away and watch others do it. The other type of person is the one who comes up and is like, ‘Yeah. I definitely want to lick this right now.'”

“I just kept licking. And when I needed to lick more, I licked more.”

Apparently, I was the latter of these two types. But after losing pretty quickly, I inquired into viable strategies before trying again. “I would say the best tongue tactic is the poking technique. Just leave your tongue out and poke at it,” DeMarco instructed.

The top player on the leaderboards (“It’s asking me to lick interface my name!” exclaimed one player who also made it onto the list) from that day, Nikk Mitchell, happened to drop by by the booth as well while I was trying out the game. When asked about his tactics, Mitchell gave simple but instructive advice. “I just kept licking. And when I needed to lick more, I licked more.”

When pressed about how his tongue had developed such licking skills, Mitchell responded with a demure “Oh my god,” before respectfully declining to answer with anything more than “I guess my tongue was just born for Planet Licker.”